ICYMI: Ray in the Sunday Times 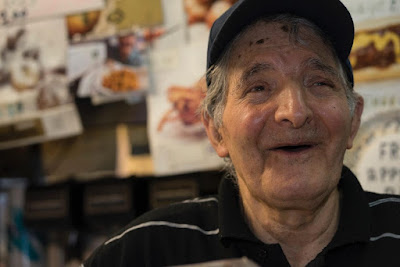 In an article published Sunday, Alex Vadukul at The New York Times looks at the relationship between filmmaker Arya Ghavamian and Ray Alvarez, the proprietor of Ray's Candy Store on Avenue A.

An excerpt from the article:

Mr. Ghavamian walked into Ray’s Candy Store one night in 2014. As Mr. Alvarez made him a milkshake, he noticed a photograph of Mr. Alvarez proudly holding his certificate of naturalization. They started speaking Farsi, and Mr. Ghavamian discovered that Mr. Alvarez is from Tabriz, just like his father. “Metaphorically, I realized that our stories are the same,” he said. He started filming soon after.

And here was the video that came with the crowdfunding campaign...


The Candy Store: A Documentary from candystoremovie on Vimeo.

Well what a wonderFULL post to greet me as I return to the net after an abstinence of exactly 389 days.
EVERYthing has taken me longer to accomplish than I anticipated (situation:normal:), with the return of electricity to the bldg only in the last few days, and satellite net today (fairly slow 50G's for $70, $150 upfront).

SUPAH RAY GONNA BE A STAHHH!

Could'na happen to a finer fella!

(I'll eventually read the backstory here, and in general catch up with 'da news, but won't be commenting til the fall....my list of 1280 things to do is finally below 1000.....WAY too busy.
Hope everyone is having a GREAT summer, continuing to variously ignore, protest and laugh at the idiot-in-chief. Both a dual citizen and a Nam Vet, took me an hour at the border while they "checked my credentials".....on my approx 1500th lifetime trip across that border....good, eh?)

I wish you all HOT FUN IN THE SUMMERTIME!

Impressive article in the NYT. Ray is a worthy subject for a documentary.

Every time I want to cancel my subscription to the NY Times in disgust, something like this happens. They're outwitting me, is what it is.