A Chicago-based artist who fills the city's potholes with mosaic art has brought his work to NYC.

Jim Bachor has adorned eight potholes around the city with tiled images of dead rats, cockroaches and pigeons, as the Post reported today.

However, in the East Village, his pothole filler on Second Street between Avenue A and First Avenue is of President Trump... 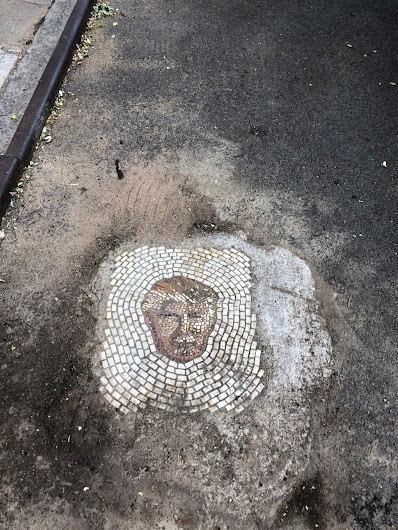 He told the Post: "It could be seen in both ways — one that you’re honoring our president or that you get to drive over Trump." City officials see it as a nuisance, and will pave them over once discovered.

"Aside from putting himself in harm’s way in the middle of roadways, the artist’s adding of artwork in the street is a danger to all road users, which poses safety hazards should drivers become distracted by the art," said spokeswoman Alana Morales.

So according to the city spokesperson....

Pure genius!!!
They want to pave us over.

Calling all dog owners in the neighborhood - you know what to do.

Hey FRANK, he's doing something illegal. That said, calling these mosaics a "distraction" is laughable.

Maybe if the city filled potholes quickly enough this guy wouldn't be able to do it.

Nobody despises Trump as much as I do but for once I agree with the city. Besides I have had enough of this guy's visage. He is among other things, the most overexposed person in the history of the world. Additionally, this is preaching to the choir. NYC rejects Trump, it goes without saying. As far as art, this is hardly making a statement. We can all see the shit-show just fine. It's inescapable actually.

This is exactly what is wrong with our society. Perhaps Mr. Bachor could find a way to express his political opinion with such a shallow and uncivil statement. If you expect to have someone treat you with respect, it is a good idea to show some respect back. But Mr. Bachor evidently doesn't know how to spell respect.....not even in mosaic letters. Beyond that..the artwork is....well.....is it really artwork?

Huh, you know what's a dangerous distraction to drivers? Potholes!

I went looking for this today and couldn't find it. Either it's under a car or it's already been paved over. :(