At the rally outside the former P.S. 64 Friday evening 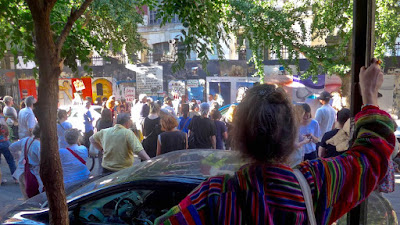 On Friday evening, several local elected officials, community activists and residents gathered outside the former P.S. 64 (aka CHARAS/El Bohio) on Ninth Street to rally for the return of the building to the community.

The date marked the 20th anniversary of the city auction where developer Gregg Singer became the owner of the property between Avenue B and Avenue C.

Attendees at the rally called on Mayor de Blasio to take the next steps to return the building for public use. The building became a community center after the school left in 1977. The group was evicted when Singer took over as the landlord.

20 years ago an injustice was done when Mayor Giuliani sent the CHARAS/El Bohio community center to auction. We’re pushing to get it back in the LES/East Village community’s hands. I urge the mayor: step on the gas in reacquiring the space — it can’t be a back-burner project. pic.twitter.com/7QfcWje937


@NYCMayor Give us our community center back #CHARAS today marks 20th anniversary of the action of CHARAS/El Bohío community and cultural center with @galeabrewer @RosieMendez @CarlinaRivera and community leaders pic.twitter.com/EtnCVshBqx


Today our neighbors came together to rally for CHARAS/PS64 on the 20th Anniversary of its auction. We have fought for a long time to reclaim community spaces & we are reminding our @NYCMayor of his commitment to the Lower East Side to get this building back. pic.twitter.com/H0iUNPXFSn


During a town hall forum at P.S. 188 last October, de Blasio said that the Giuliani administration should not have cautioned off the property, and that he would work to "right the wrongs of the past," as DNAifno reported.

"For the administration to put that building into private hands failed miserably, and we’ve seen the negative affect that that has had on the community. So I'm announcing tonight the city's interest in re-acquiring that building," de Blasio said, eliciting cheers from the audience.

The mayor has not publicly discussed this interest any further.

Meanwhile, Singer says that he has no intention of selling the building, which he bought for $3.15 million. He wants to turn the landmarked property into a dorm called University Square, which continues in a holding pattern while the DOB maintains a Stop Work Order on the building.

Singer discussed his plans and aired his frustrations with the city, claiming officials have obstructed his legal right to develop the property, in this wide-ranging interview from June 3 with The New York Times.

Here are more photos from the rally via EVG contributor Peter Brownscombe ... 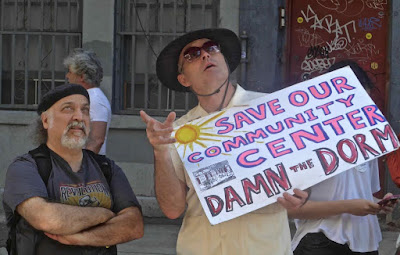 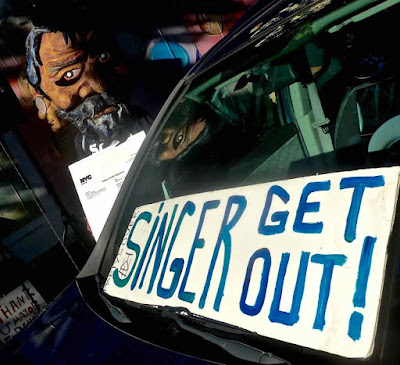 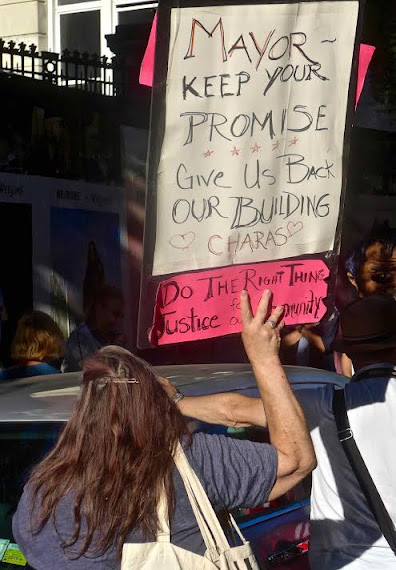 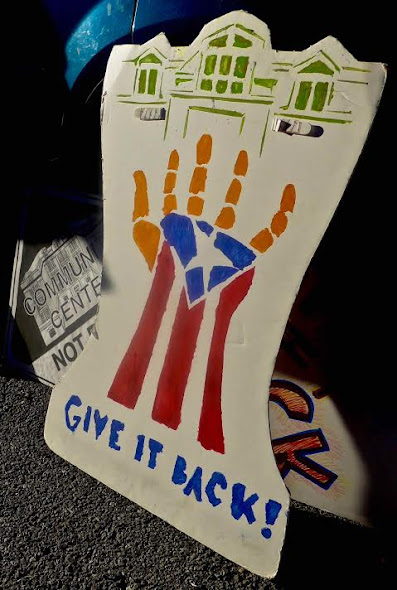 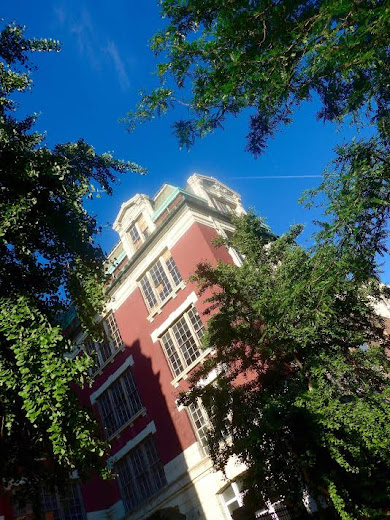 For me this really highlights what unusually non-useless pols we have in this nabe. Rosie, Carlina, Harvey, Gail, they've all been great on this and many other things. We need to push now to right this wrong. De Blasio's an unusually spine-ful pol, for all the shit he gets (UPK, took on the cops, not the real estate industry's best friend, Wall Street hates him), but he's gone wobbly on this one and needs a lot of encouragement.

PS 64 is a dead issue. And the rally was a dog 'n pony show for who?But an issue that is alIve and current is the shuttering of the Boys' Club. And Brewer and Rivera have said and or done NOTHING. One party rule. One party rule.

Thank you, EVG, for reporting on this.

I agree with cmarrtyy. Twenty years is a long time. What isn't clear from those who want the building to be given back (to whom?) is for what purpose. In the twenty years the neighborhood has changed. I would have hoped for a detailed outline of how the building would be used, how its expenses would be met, who would pay for renovations (what was acceptable 20 years ago is probably not up to code in 2018). cmarrtyy is right to criticize the usual political suspects of grandstanding. We have real problems in the East Village / Lower East Side and we need real solutions. How would re-acquiring this building become part of a changing neighborhood's needs?

This is undoubtedly a very uphill endeavor since it would involve getting the building away from the current deed holder. But the building is sorely needed to serve the former purpose as a neighborhood headquarters for youth and culture programs serving the community. One of the most stark things noticeable at the rally was a totally missing generation of young people who over the last 18 years would have benefitted from the previous programs offered at Charas. The street was empty of kids who should have had the benefit of activities specifically designed to educate about, preserve, strengthen and protect the local community. The conflict over Charas is one of the most stark examples of social and ethnic cleansing, what you all call 'gentrification.'

Return the community center PS64/Charas/El Bohio to our community! Outrageous that Gregg Singer has prevented an entire community over an entire generation from accessing their community space. This was once a thriving space for a broad array of groups. An entire generation of children has grown up deprived from using it. Why does a poor person get arrested for jumping a subway turn-style but a rich guy can harm thousands for 20 years without facing criminal charges? Is this community resilient enough to stand up to the money this millionaire spend on lobbyists and public relation firms. We need the mayor to step in to bring justice.

what a wealth of cliches and metaphors to choose from...what do you prefer...the horse is out of the barn or don't cry over spilt milk or don't piss into the wind or prehaps Elvis has left the building? This "battle" was lost when the building was auctioned. It never should have been, but unfortunately that's legally, strategically and practically besides the point. There is no mechanism by which the city can reacquire the building other than a long shot eminent domain battle which is legally bad policy and a total loser as a gambit. Also, do you really want the city expending untold millions of dollars to try and reacquire a building that requires millions and millions more in rehab? Do you think city capital dollars are bottomless and that committing to acquire this building (again really not practically possible)wouldn't take money from other EV priorities?

The political posturing here is irresponsible. Feeding a portion of the community fantasies about a "victory" is empty, misleading and hugely condescending to EV residents.

Highline got hundreds of millions of tax money thanks to Quinn and now it continues, not to mention a slew of others, so the no money angle holds no weight

@respect Brooklyn well no. The highline was and is public property. This property was stupidly sold into private hands. There is no comparison at all.