Remembering some disappearing storefronts courtesy of Karla and James Murray 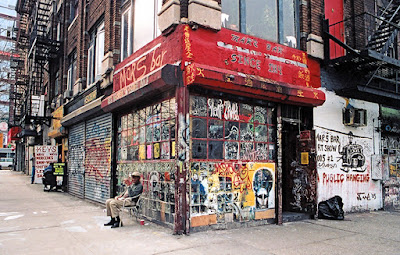 Karla and James Murray, the East Village-based photographers, currently have a storefront installation (through July 2019) in Seward Park titled "Mom-and-Pops of the L.E.S."

Meanwhile, starting tonight, their photography — spanning the past 20 years — will be on display in an exhibit titled "Store Front: The Disappearing Face of New York" at The Storefront Project, 70 Orchard St. between Broome and Grand.

Per the exhibit description:

The Murrays have captured the out of the way bodegas, candy shops and record stores just as faithfully as the historically important institutions and well-known restaurants, bars and cafes. From Katz’s Delicatessen to Ideal Hosiery and the Mars Bar, James and Karla reveal how New York’s long-standing mom-and-pop businesses stand in sharp contrast to the city’s rapidly evolving corporate façade.

The opening is tonight from 6-9. The storefront photography will be on display here through Aug. 12.

The Murrays were also the focus of this feature in The New York Times yesterday.
Posted by Grieve at 4:00 AM

Email ThisBlogThis!Share to TwitterShare to FacebookShare to Pinterest
Labels: James and Karla Murray