The city appoints 14 members to its first Nightlife Advisory Board 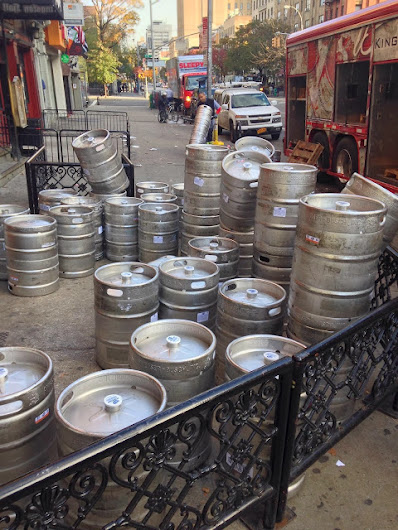 [EVG file photo from outside the 13th Step]

Back on Thursday, a trio of city officials — Speaker Corey Johnson, Council Member Rafael Espinal and Mayor de Blasio — announced the appointment of the 14 members of NYC's first-ever Nightlife Advisory Board.

Here's part of the new release from the city...

As a complement to the newly formed Office of Nightlife, the all-volunteer board is charged with making recommendations to the City Council and the Mayor on ways to improve regulations and policies that impact nightlife establishments.

Ranging from DJs and hospitality advocates to regulatory attorneys, the appointees bring a variety of perspectives and expertise on New York City’s celebrated nightlife.

“New York City’s nightlife is second to none. It attracts visitors from around the world and is an economic engine across the five boroughs. The new Nightlife Advisory Board reflects the diversity that makes our city and our nightlife great. Working together, we will ensure the industry continues to thrive,” said Mayor Bill de Blasio.

The Nightlife Advisory Board will issue formal recommendations to the Mayor and the Council that will address the regulatory structure of the nightlife industry; common complaints about nightlife establishments; public safety concerns related to nightlife; zoning, enforcement, nightlife workforce conditions and the integration of nightlife into the city’s various neighborhoods. All members will serve two-year terms.

Housed at the Mayor’s Office of Media and Entertainment, the Office of Nightlife is designed to serve as a central point of contact between City agencies, the nightlife industry, and city residents. Its mission is to promote a safe and vibrant nightlife scene that benefits businesses, residents and those who work in the industry alike.

• José Francisco Ávila, founder and managing member of Garufina Afro-Latina Entertainment, LLC. and Chairman of the Board of The Garifuna Coalition USA, Inc

• Kurtis Blow, rapper, singer, songwriter, record producer, DJ and Chairman of the Universal Hip Hop Museum who has released 15 albums over the course of his career

• DJ Tikka Masala composes and produces music for the Obie and Bessie award winning Brooklyn based feminist acrobatic dance company, LAVA, and is resident DJ at Henrietta Hudson, the oldest lesbian bar in the city. Tikka Masala has been working in NYC nightlife since 2004

• Susan Stetzer, district manager for Community Board 3, Manhattan, where she has served for the past 14 years

Over the weekend, several EVG readers reacted to the news via email, with one noting: "This has to be the most absurd concept ever. Meanwhile, homelessness is at a record high, NYCHA is gonna collapse and kids got lead poisoning, but we need more cocktails."

Previously
Posted by Grieve at 4:16 AM

Email ThisBlogThis!Share to TwitterShare to FacebookShare to Pinterest
Labels: night mayor, the Nightlife Advisory Board

“New York City’s nightlife is second to none." This statement is a joke, right? NYC has no nightlife, only row after row of drink to get drunk bro bars.

With a few exceptions this group reads decidedly pro-licensing. The city is not suffering from lack of bars and a liquor license does not translate into success for an arts establishment. Sky-high rents and greed are driving this ridiculous office.

NYC's nightlife isn't what it used to be, certainly. I'm glad the city realizes this.

The new nightlife department is already understaffed. How do I know? Because there is no way that they can hire enough workers to deal with all the complaints they will be receiving from day one about the bad business practices of bars, clubs and assorted other problem establishments.

That's some board ... did I miss an appointee who represents tenants or home owners?

Can these, uh, highly qualified appointees maybe do some about EV bars whose credit card minimums are $20 (and not the legally mandated $10) and whose menus violate protocol by not including calorie counts on them?

"Nightlife Mayor" was a bad joke, now made worse by having an "Advisory Board" consisting of people who think things should be loud and go on very late. NOBODY mentioned as an "advisor" in this article is representing the communities where night life ruins quality of life. NOBODY.

I don't expect rappers and liquor-license attorneys to give a flying fig about quality of life for those of us who have to go to work in the morning - and if you think they will, I have a bridge to sell you. And don't get me started on Susan Stetzer, b/c I live in Community Board 3 and IMO, CB3 is one of the most useless & dysfunctional community boards in the entire city.

And what, exactly, does a representative for a Supermarket Association have to do with policing nightlife in NYC??

I haven't read if/how much these additional people are being paid - which is relevant b/c IF they are being paid, that's even more taxpayer money down the endless drain that is De Blasio-ville.

If NYC genuinely wants to deal with nightlife, create some "party piers" on the West Side, and then actually enforce noise laws in the rest of the neighborhoods. Working people, families with children, and retired people ALL have a right to be able to sleep without being awakened by the hopelessly drunken hordes.

The first abomination was hiring Ariel Palitz - owner of the worst offensive bar in the East Village - and now this. What a joke. How about some residents in high density bar areas on the team.

It's the mayor's night parliament. Ariel must be getting overloaded with complaints about her peers obnoxious bars, or is that one complainer that calls over and over like she earlier claimed about her own high end dump she ran.

This reminds me of the group that was assembled to determine what statues are offensive or not and which should be stay up or be taken down. What a busy man the Blaz is. No wonder he had no time for ideas (to quote him) to improve environmental conditions at public housing buildings.

This is hilarious! Curtis Blow? DJ Tikka Masala? Marti Gould Cummings? Susan Stetzer??? This isn't an advisory board, it’s the cast of a very bad Realty TV show! The only question is who gets voted off the Island first? And who will be named Head of Household? Who will be the first to hook up with a castmate in the ladies room at Balthazar? Spoiler Alert: It really doesn't matter who the Ad-VICE-ory board is, Ariel Palitz is the star of the show, and we have already seen what she thinks is an acceptable level of noise and mayhem, which is one level down from total Armageddon. Pass the popcorn, this is going to be fun to watch.