On the CB3-SLA July docket: Szechuan cuisine for Avenue A; No Reservations on Avenue C 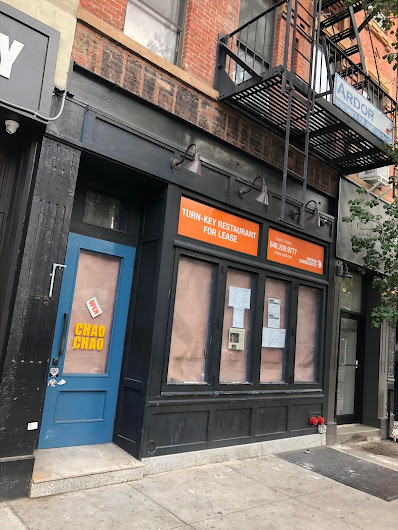 CB3's SLA committee meeting tonight ... you can find the full rundown of applicants at the CB3 website.

A restaurant serving Szechuan cuisine and dim sum is in the works for this space between 10th Street and 11th Street.

The applicants, who have not been licensed previously, are looking for a beer-wine license.

Proposed hours are noon to 11 p.m. Sunday through Thursday; until midnight on Friday and Saturday. The PDF on file at the CB3 website includes a sample menu.

Chao Chao, a contemporary Vietnamese restaurant, closed here without any notice to patrons in May 2017 after six months in business. Chao Chao evolved from Soothsayer, which opened in January 2016. Soothsayer, from the same operators, also closed without any notice to patrons at the end of September 2016. The applicants had hoped to secure a full liquor license, but couldn't make the space work with just beer-wine.

171 Avenue A was also the onetime home of Rat Cage Records and 171A, the illegal club-turned-rehearsal studio that produced records by Bad Brains and the "Polly Wog Stew" EP by the Beastie Boys. 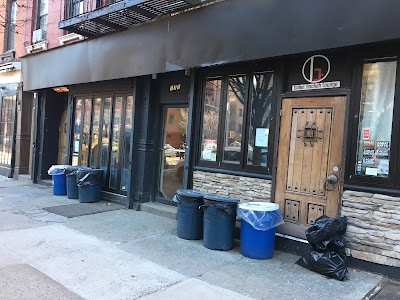 A venture called No Reservations is being proposed for 129-131 Avenue C between Eighth Street and Ninth Street. (Not sure if the No Reservations name is some kind of tribute to Anthony Bourdain.)

The applicants were previously involved with The Grayson, the sports bar at 16 First Ave. The sample menu at the CB3 website shows comfort foods such as burgers, wings and... hot dog sliders.

The proposed hours are pretty varied — 4 p.m. to 2 a.m. Monday to Wednesday; to 3 a.m. Thursday through Saturday (with an 11 a.m. open on Saturday and Sunday)... the applicants are also looking to license the rear garden, which has a different set of proposed hours. You can find the application (PDF) here.

This space was last home to the hookah hotspot Babel Lounge.

CB3's SLA committee meets tonight at the Public Hotel, 17th Floor, Sophia Room, 215 Chrystie St. between Houston and Stanton. The proceedings start at 6:30.
Posted by Grieve at 4:14 AM

Yikes backyard space open until when?