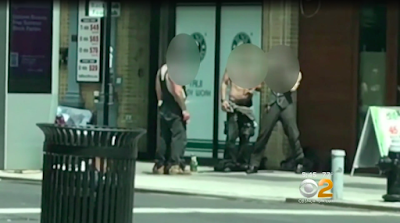 “It’s getting worse now than it was before,” said Tania Martinez who lives in the East Village. “Me paying a lot of money being here, I shouldn’t see things like this.”

The homeless nomads – known to hop freight trains – pop in and out of cities across the country like Seattle and San Francisco, often ending up in and around Tompkins Square Park when it gets warm out.

The pilgrimage dates back to the late 1970s when many began migrating for the neighborhood’s punk rock music scene. Like most subcultures, rejecting the status quo was a conscious choice by its members.

“It’s absolutely a choice,” said Dallas, one of the movement’s adherents. “We just hate our government system, the way it affects us as a whole.”

NYPD sources say there are more transient people this summer because of the city’s increasing opioid epidemic. The narcotics division has been patrolling the park to help, with police doubling arrests this year – many of them drug related.

Police sources say because of the stepped up enforcement, many “crust punks” have started sleeping inside abandoned buildings in the outer boroughs instead.

SO if a Crusty goes from sleeping on the street to sleeping in an old abandoned building, does that make him a Dusty?