Report: Rats running rampant in the Relaxation Garden on Avenue B and 13th Street 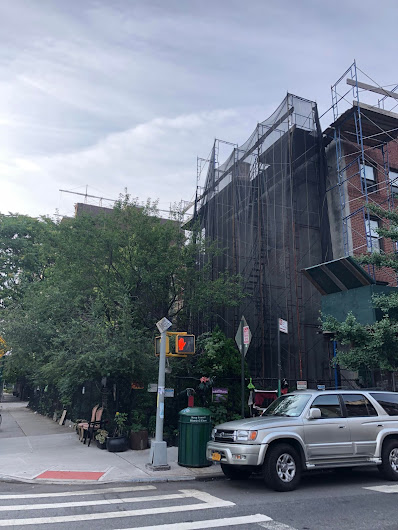 Residents say that rats measuring up to a foot long have been spotted in and around the Relaxation Garden on Avenue B at 13th Street, the Post reports. 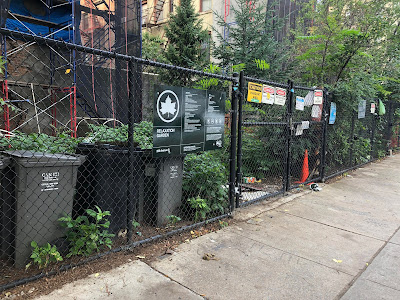 The GreenThumb garden, part of the city’s urban gardening program, has been locked up the past two years during renovation work next door... 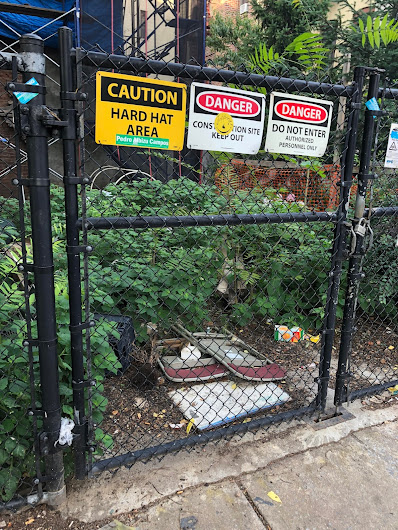 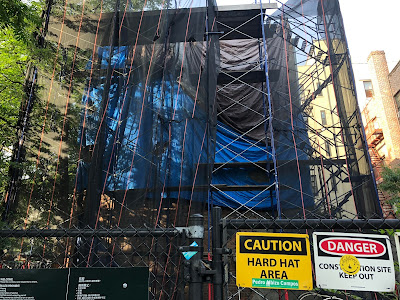 While closed, the garden has become a dumping ground ... and a breeding ground for rats, who apparently have a buffet at their disposal adjacent to the property.

Some residents blame the growing rat infestation at the lot at Avenue B and East 13th Street on an adjacent trash-compactor area that serves neighboring buildings and NYCHA’s nearby Campos Plaza II housing development.

As a result, the sidewalk there has become a dumping ground for garbage, residents said Friday.

Making matters worse, another maintenance worker, who takes care of trash from two buildings on the block for C&C Management, said the city picks up garbage only “once every five days.”

Department of Sanitation spokeswoman Dina Montes said that “at a minimum” the agency “empties the compact container at this location three times a week.” 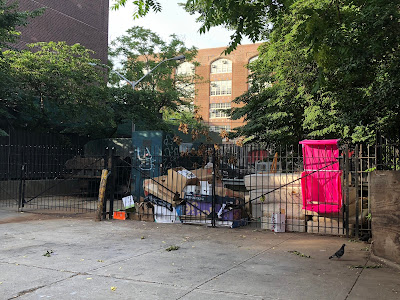 Aside from the fact that no one seems to know who's supposed to empty the dumpster (the city or a private company?), the construction at the building next door, 207 Avenue B, is at a standstill. The city issued a Stop Work Order in March 2017 because the contractor of record withdrew from the project.

The Parks Department is reportedly working with 207's landlord to expedite the work so that the garden can reopen.

The rat-baiting caution sign on the garden gate was last dated Feb. 27... 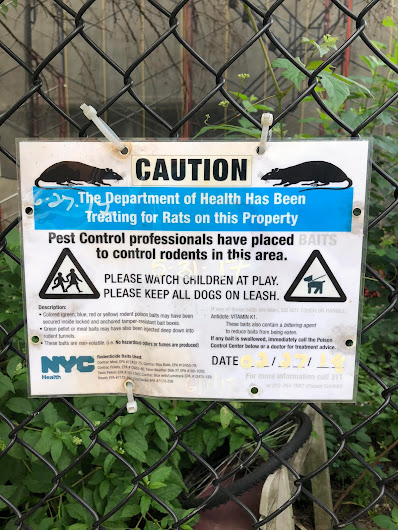 ... and this is the poison that some property owners don't properly use, allowing any animal to ingest it... (one of the red-tailed fledglings in Tompkins Square Park died yesterday morning from rodenticide poisoning)... 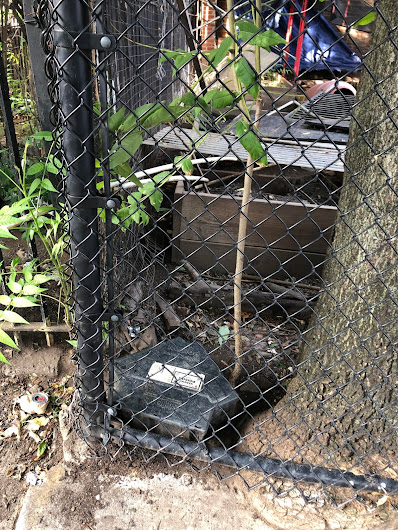 “The city? They don’t do nothing,” added Juan Rivera, 57, who lives at the nearby Tanya Towers. “The rats are so big, like cats. I’m scared. Everybody is scared.”

And perhaps this is why the TSP red-tailed hawks are eating poisoned prey.

Everywhere you go in the EV trash lines the curbs and sidewalks. What Is Going On Here, Mr. Mayor! Ms Carlina Rivera?! You don't see this anywhere else in Manhattan. WHERE ARE OUR LEADERS!

This is exactly the sort of thing that infuriates me. A neglected lot, people dumping garbage, no communication between agencies...the result is a trash pile with no one taking responsibility. But there always seems to be someone available to dump rat poison in a place like this without making any effort to curb and prevent the rat problem in the first place.

As the rat population is allowed to get out of control, a lot like this attracts predators who see the rats as an easy meal. This is how we get dead baby hawks.

There's another trash compactor in front of public housing at Avenue D between 7th and 8th St. The stench encountered here could knock a buzzard off a shit wagon, as the saying goes; the surrounding lots are perpetually baited with rat poison. The compactor is continually overflowing and grotesque. I am deeply ashamed our city sees fit to subject residents here to both Stalag 17 style lights AND this sick compactor situation. Mystery abides here as the surrounding lots are covered with new fencing and signage indicating construction... on the lawn.

I wonder if there is anything that can be done to scare hawks away from this area so they will hunt elsewhere?

What are you talking about? Trash gets picked up 3 times a week in our neighborhood. It is normal to see trash put out for collection. Totally false that trash lines the streets and curbs throughout the east village. It ain't always pretty but a far cry from the 80s and 90s. Do you even live in the neighborhood?? Geesh