Conspiracy theories: Who was the anonymous donor behind St. Brigid's $20 million donation? 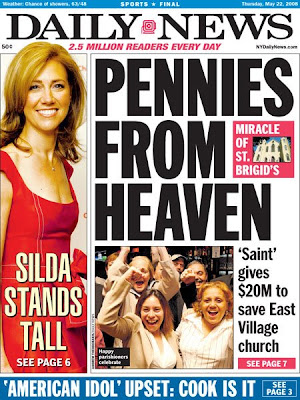 On this date (or, online the day before!), we learned that an anonymous donor came to the rescue of St. Brigid's, which reopens Sunday, saving the historic building's grounds on Avenue B and East Eighth Street from life as a condo or dorm. (There was also talk in 2003-2004 that the Cabrini Center would move here from down on East Fifth Street, as The Villager reported.)

Per the Times: "The gift includes $10 million to restore the building, at 119 Avenue B; $2 million to establish an endowment for the parish so that it might best meet the religious and spiritual needs of the people living in the community'; and $8 million to support the St. Brigid's School and other Catholic schools in need."

Great news. And fodder for conspiracy theorists. Matt Dillon! Bette Midler! The Villager mentioned Chuck Feeney, "an Irish-American philanthropist who has given about $400 million anonymously through The Atlantic Philanthropies, which he endowed."

And now, Dave on 7th shares his conspiracy theory:

Ever since St Brigid's was saved, I've wondered why, after going to literally the last hour in trying to demolish the church and sell off its incredibly valuable real estate, the Archdiocese would suddenly accept the offer of an anonymous donor and essentially rebuild the whole church from scratch.

My theory is that the "donor" is in fact the Archdiocese itself, and they needed to remain anonymous because they had just closed like four parishes in the neighborhood.

Interestingly, the parish that survived the cuts was St Emeric, which is housed in a nondescript church located on a dead-end street behind a power plant.

At some point a year or two ago, I saw flyers on Avenue C announcing that the Cardinal would be holding a mass at St Emeric. That's a BIG deal for a little church in a nondescript building behind a power plant. 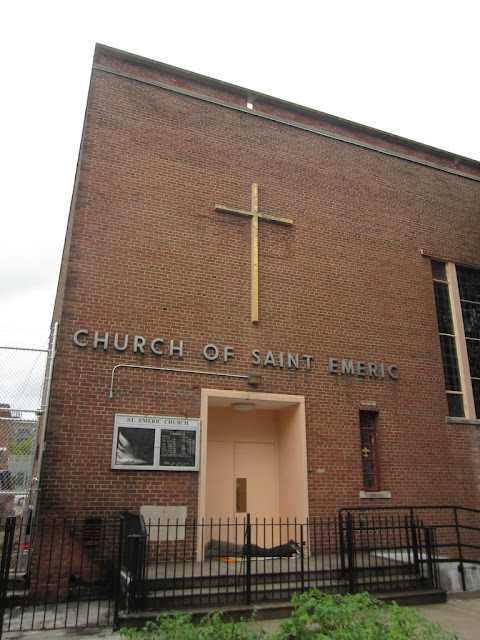 Then came the announcement that St Emeric would "merge" with St Brigid's, and that the parish priest would come from St Emeric. That clinched it for me.

This was a deal between St Emeric and the Cardinal (who, by the way, is going to lead the first mass in the new church, again a very BIG deal) to rebuild the church and turn it over to whatever order St Emeric's is. And it all had to remain anonymous and unassociated with the Archdiocese or else the other parishes that were closed, in possession of perfectly good structures would be up in arms. This way it had nothing to do with them, they were at the mercy of a wealthy donor.

In the end, I'm just glad the building was saved, but that's how I think it all happened.

What do you think? I'm still going with Matt Dillon as the donor ... all those "Wild Things" residuals ...
Posted by Grieve at 6:23 AM

Fantastic coverage of this momentous occaision and all the history behind it. As always, hats off to you, Grieve!

Feeney has to be right. His history has been in donating anonymously, and $20MM is a drop in the $6 billion bucket he has given away.

There's absolutely no way the Archdiocese could afford $20MM. I believe it was someone like George Steinbrenner. Makes sense. He had that kind of loot, was nearing death and he was known for anonymous local gift giving of this type and magnitude.

@ anon 12;09. You must be joking if you believe the Archdiocese of New York could in "no way" afford to spend a lousy $20 mm. The recent sale of Mary Help of Christians netted them $41 mm, alone. The value of their real estate holdings in the city runs into the billions of dollars. The Cardinal could get his hands on $20 mm faster than you can say "Hail Mary full of grace."

@anon, I actually considered that possibility, but I have only the vaguest notion of the man or his wealth, whereas I have no doubt of the wealth of the Bishop of Rome and his Congress of Cardinals.

The donation was made after a date was set for the hearing of the case of St. Brigid's before the New York State Court of Appeals. I suspect that the donation was made to get the case off the docket. Maybe the Archdiocese was concerned that they could lose. If the case had been heard and the Save St. Brigid's Committee won, it would mean that throughout New York State parishioners are members of religious corporations and have the power to vote on the fate of their churches should their diocese/archdiocese move to make it anything but a house of worship. This has tremendous implications for the role of the laity in the management of the real properties of the Church. I would like to know not only the who? but the why? behind this donation. I would also know why the Archdiocese decided to argue a similar case, the one of Our Lady of Vilnius, in 2011. It seems like they were confident that they would win and I would like to know why. If I was a journalist I would be on this like Woodward and Bernstein.