Wow. EVG regular Salim just shared this... This morning, workers from a bell-restoration firm were putting a 3,000 pound, 150-year-old bell back in place at St Brigid's on Avenue B and East Eighth Street. 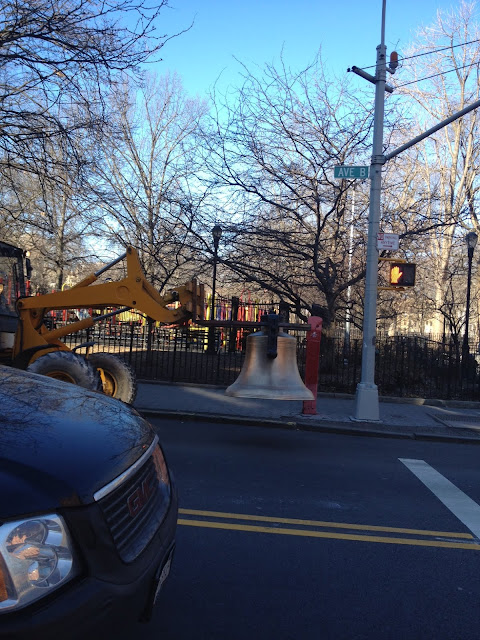 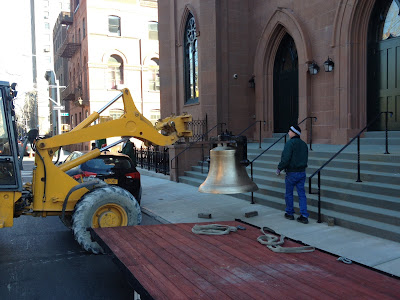 Per Salim: "Everyone — cars, pedestrians, cyclists — was stopping to look at the bell. It was remarkably bright and beautiful, and the bell restorers had a lot of pride as they described it... forged in 1858, I think." 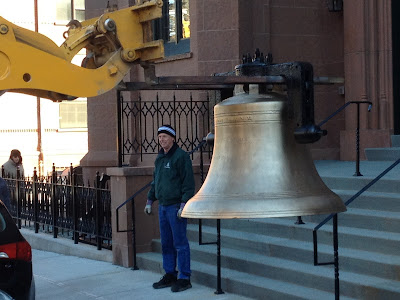 After a lengthy restoration, St. Brigid's is set to reopen on Sunday, as we first reported. And this might just do away with those fake "bells" that we've been hearing...

Salim and some other readers noted that the bell is actually on display now outside the church... 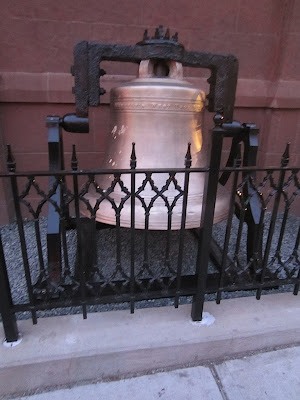 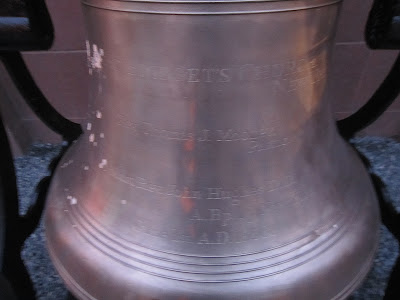 Hopefully people won't decide to do anything stupid here... it's pretty much right there in shenanigans way... 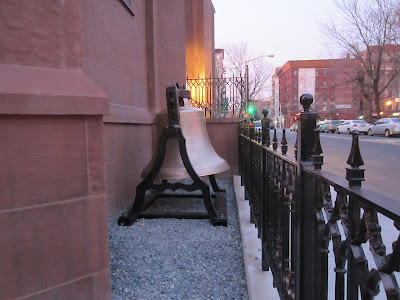 That really is beautiful!

I wonder if a person's tongue will stick to a frozen bell?

Whatever the intention of going to St Brigids might be, for me it will always be a place of contemplation.
When my sister died i climbed into that bell tower.
It was meaningful to me, and as part of the
EV community I am so pleased that the church was saved.
And that bell rocks

The bell needs a name like Quasimodo (Charles Laughton) did in the 1939 classic.

QUASIMODO:And look - (pointing to bells) up there - my friends! Up there! Babies! (sings each name in the bell's tone) Jacqueline - Gabrielle - Guillaume - Big Marie! She made me deaf, you know. (hits the bell) I can hear my friends. Shall I play them for you?

That's a beauty. Can't wait to hear it ring.

Had the express pleasure of helping (as a laborer) to install a new bell in a church once.....blew me away that for the folks in charge they could answer the question, "What do you do for a living?" with "Well, I install bells in churches." = COOL job!!!

Very cool! For whom the bell tolls...

I'm no fan of churches, but I am a huge fan of church bells. Can't wait to see if their music makes it to my ears.

pumped on 7 and b for its glory

Looks like it is being left at street level for display.

Knock on it and it makes a sound like a bell, oddly enough.

I am guessing that the drunken douchebag tour has a new 2 am stop.

where's all the "these are electronic belles" people now?

hope that is not the permanent resting place. the NYU santa cons and superbowl barfers will graffitti it up in no time, like they've destroyed the rest of the neighborhood.