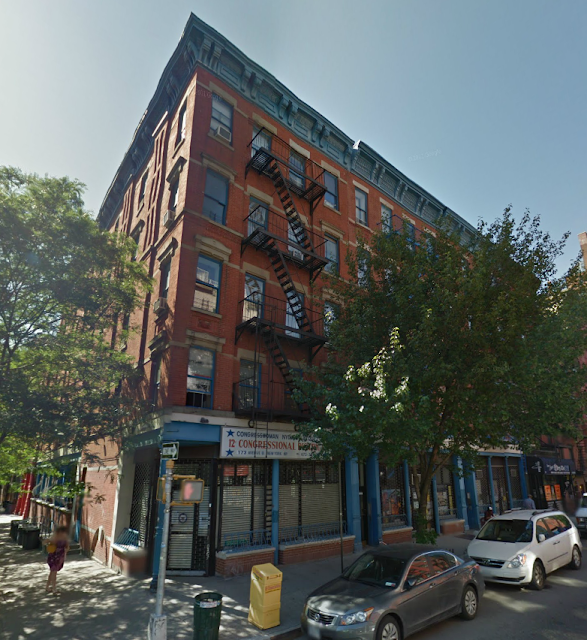 EVG reader c ryan passes along this photo ... on the door of Congresswoman Nydia M. Velázquez's longtime office on the southeast corner of Avenue B and 11th Street... 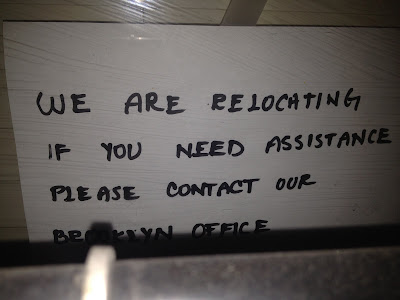 We haven't heard just yet if she'll maintain an office on the Lower East Side... Her newly drawn Seventh Congressional District includes the Queens neighborhoods of Maspeth, Ridgewood and Woodside, the Brooklyn neighborhoods of Bushwick, Greenpoint, Red Hook, East New York, Brooklyn Heights, Sunset Park and Williamsburg and part of the Lower East Side and East Village.

Per the comments, Congresswoman Carolyn Maloney now represents this area in the reconfigured 12th Congressional District...

Anyway, as for the space ... the Lower East Side People's Mutual Housing Association owns the building. And rumor is GOLES will expand into this space?
Posted by Grieve at 6:00 AM

The big Puerto Rican flag that used to be draped above the office disappeared a few months ago. I always considered it a sort of gateway to the Loisaida... Presumably if the Lower East Side People's Mutual Housing Association owns the building this means we won't be getting a Subway in its place?

i guess the pile driving is too much for her?

Wow. What a district. Clearly she is the god that all hipsters must pray to.

Carolyn Maloney now represents the Alphabets. Nydia was redistricted to east of D.
Rumor is that GOLES will expand into the space. That is a good thing! GOLES is doing great tenant organizing work in a super crowded office next door.

Thanks for the background... Hope that GOLES does expand into the space...

And I got lost in all the redistricting business...

No great loss, I think in all the years she's been in that space I've seen it open exactly one time.

As Gojira says--no one was ever in that office. I wonder how many tax dollars went to maintaining that office over the years. I'm sure GOLES or any other worthy local not for profit could have used the couple grand a month (or more) that was wasted there.

Haven't seen the gates up for months!!!

That office was open monday to friday from 9 am to 5 pm all the way until the moment that redistricting took effect. The door open to any constituents who needed help, and the staff was nice enough to help people beyond walk in hours

In what alternate universe was that, Carlos? Cos it sure was not the one I was living in - in the universe I inhabit, the doors were always locked, the shades drawn, the office empty. I live half a block away from the place and know whereof I speak.