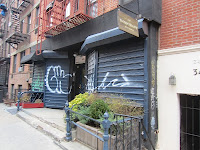 1. The owners of The Immigrant will open a cafe adjacent to their current home on East Ninth Street. True.

Late yesterday afternoon, owner Jason Corey confirmed his intention to open a similar space next door. If all goes well, then he is "hoping to open our low-key locals hangout bar extension in the next two months." The Immigrant Tap Room is a working name for the new space now, with both beer and wine likely available.

2. The Mermaid Inn is expanding into the Candela Candela space next door on Second Avenue. False.

A Mermaid Inn rep contacted us early yesterday afternoon and said that their news announcement teased via Twitter was not about an expansion.

Their news: Starting on Monday, they'll have a happy hour every day from 5-7 p.m. Also: On March 23, to coincide with the celebration of The Mermaid Inn's 10-year anniversary, they are launching a lunch service on weekends from 12:30-4:30 p.m.
Posted by Grieve at 6:00 AM

Email ThisBlogThis!Share to TwitterShare to FacebookShare to Pinterest
Labels: Mermaid Inn, The Immigrant

And reported by Evgrieve... Total Perfection!

Doesn't Mermaid Inn already have a daily happy hour from 5-7?(that's what their sidewalk sign says)

Offering "Lunch Service" seems like they want to get a piece of the brunch action. The EV Brunch Scene is a bit over the top. Last Sunday my sister and I tried to grab a bite around 1pm and nearly every sitdown restaurant was a zoo with at least a 30 minute wait.

Should have just gone directly to Odessa and skipped the silliness.

One of my favorite times in the EV is about 11am on a Saturday or Sunday. Not too early, but you can pretty much get a seat at any brunch place in the neighborhood (other than Clinton Street Bakery, of course). Once 12:30pm hits, it's all men (and women) for themselves.