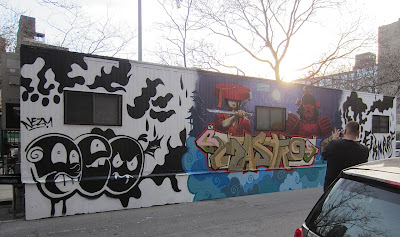 Centre-fuge Public Art Project is proud to announce the continuation of murals on the trailer at First Street and First Avenue. Cycle 7 is the first installation of art in the new year.

In mid-2011 a drab, gray trailer, serving as a temporary office for workers on the 2nd Avenue subway line, popped up on the South side of First Street. For two years now Centre-fuge Public Art Project transforms the DOT trailer into a rotating street gallery. Artists create work on all visible sides of the structure with the art changing every other month. Anyone can propose an idea for work on the trailer.

The goal of Centre-fuge is not only to re-beautify an incredible block, but also to encourage the community to express itself in a public forum. With the closure of half of Houston Street, making underground way for the 2nd Avenue Subway line, the ever-growing presence of construction makes the area feel less like a neighborhood full of individuals and more like a work site full of barricades and jackhammers. Centre-fuge attempts to combat this effect. The project is dedicated in memory of friend, creator and Lower East Side neighbor, Mike Hamm.

Artists represented in Centre-fuge, Cycle 7 are Hellbent, Joe Iurato, Joseph Meloy, Matthew Denton Burrows, Nicholai Khan and Yuki. For more information on each artist, go to centre-fuge.tumblr.com/artist-bios. The recreation of Mike Hamm’s work is permanently installed on the eastern face of the trailer. A new Mike Hamm piece will be installed on the eastern face in April.

The seventh installation at Centre-fuge will be on view from February 10th until April 11th, 2013.

For more details, visit the Centre-fuge Tumblr. Previously.
Posted by Grieve at 5:30 AM

Email ThisBlogThis!Share to TwitterShare to FacebookShare to Pinterest
Labels: Centre-fuge