People love their dogs and consider them members of their family, and in New York City, a city with such a high number of singles, dogs may be their only family. Recognizing the enthusiasm people have for their pets, WNYC’s Data News team has created DOGS OF NYC, an interactive map that illustrates the popularity of names and breeds depending on neighborhood.

DOGS OF NYC includes:
• Doggy Census: Who lives where? Who knew Yorkies were so popular in Chelsea?
• Most popular boy and girl names (and other top 10 lists) Max and Bella reign supreme in 2012.
• Match the Breed with the Name” game, and more!
• Make your own t-shirt: a unique gift for the dog lover this upcoming Valentine’s Day!

Some more interesting tidbits:
• Princess is big in the Bronx, but Bronx — the name — is not nearly as popular as Brooklyn.
• The most popular female dog name is Bella, and Max is the most popular male dog name.
• There are 26 dogs in NYC named Pepsi, but none named Coke or Coca-Cola.
• There are 14 dogs named Kitty and 31 named Tigger.


You can read the article and find interactive stuff here. (The top image here is interactive.)

In total, there 5,000 Yorkies are licensed in the city, and more than 4,700 Shih Tzus. As for the East Village... a closer look at the stats shows that — surprise! — Yorkies are the most popular breed ... with Max being the most popular name. Followed by Bailey and, um, Coco. Keep in mind that these are only for licensed dogs, which only number 20 percent of all canines in the city. 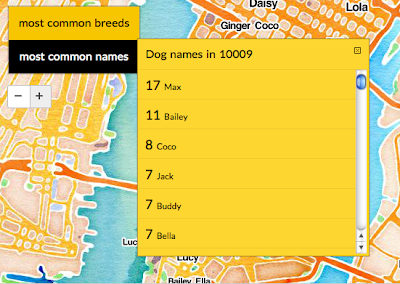 From the article: the Health Department estimates that only one in five dogs are licensed. And now a cut-and-paste job from the piece:

It’s against the law to own a dog in the city and not get it licensed. The Health Department says licensing helps reunite lost dogs with their owners, and reminds owners to keep up with vaccinations for their best friend. The proceeds from registration fees support the operation of animal shelters in the city. The penalty for getting caught by a police officer or park official with an unlicensed dog is a summons and $200.

An unscientific survey of dog owners in Tompkins Square Park in Manhattan's East Village on a Thursday afternoon reveals most of them are oblivious to the rule, the reasons for getting a license, and the penalty for going without one.

“Laziness, mainly laziness,” said one owner of an unlicensed dog, explaining why he hadn’t registered his one-and-a-half-year-old Affenpinscher with the city. The owner asked that he remain nameless for fear of incriminating his dog, to which he gave the alias “Bodean.”

You should really go get Max licensed.
Posted by Grieve at 6:30 AM

That is just not true! The East Village is dominated by mutts and pitbulls! At least in the streets..oh wait...oh, I see : Yorkie owners don't walk their dogs!!! Ha!

I love dogs and own one myself but to think that we are a neighborhood of yorkies named Max...ugh. How tedious.

Wtf is a yorkie