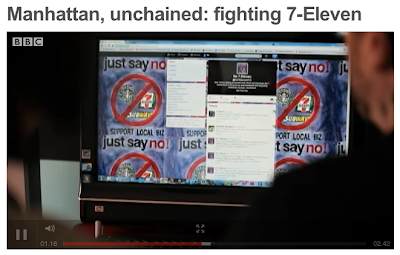 The BBC is the latest media outlet to report on the growing "No 7-Eleven" movement in the neighborhood... (You can watch the Eyewitness News piece here.)

"The BBC spent a day and a night in the community to find out more." You can't embed the video, so you'll have to head over to the BBC site to watch the segment.

Previously on EV Grieve:
[Updated] More from the anti-7-Eleven front on Avenue A and East 11th Street

Email ThisBlogThis!Share to TwitterShare to FacebookShare to Pinterest
Labels: 7-Eleven, BBC, No 7-Eleven

With all that's wrong with th eworld. To choose as your cause celebre the removal of 7-11s seems confoundingly dumb.

Yeah, drawing attention to a corporate takeover of our neighborhood and 7-Eleven's strategy to displace all of the surrounding local mom & pop shops is really beneath the people in this community. Please, tell me more about your work in Darfur.

This is about much more than the removal of 7-Eleven. It's about a once great part of this city clinging to its last drops of individuality. It's about local economies , mom and pop shops, and the forced suburbanization of the EV . It's about giant corps writing their on laws and cutting deals with the powers that be in order to guarantee their success and profit. 7-Eleven : exempt from Comander Clownbergs 20 oz sugary drink ban. 7-Eleven: exempt from DOH inspections and Clownbergs letter grade system even though they handle and serve prepared foods. Exempt from the fines permits and licenses that cost mom and pop shops thousands of dollars . I guess if you don't own a small biz it isn't your problem. But I for one am grateful to the people who have taken up this cause. Thanks to all of them.

During Hurricane Sandy it was noticeable that all of the chain stores closed up until the power came on, while the Mom/Pops places stayed open throughout the blackout, selling food, batteries and whatnot without gouging.

it is about the loss of a neighborhood. our neighborhood.
the rising commercial rents force out the stores that serve our neighborhood. the chains, franchises and bars are the only establishments that can afford these extraordinary rents.
that is the problem.
these stores provide little to the neighborhood.
the places that really serve our community do not serve tourists or the bridge and tunnel crowd. it is up to us to support them and keep them here. awe need to stop these stores that will control what we can buy. if they take over there will be nowhere to buy a cup of coffee, a donut or a sandwich except for a 7-11 or a fast food establishment.

@Anon 12:34 - so what NGO, non-profit or social service organization do you work for? If you do not believe that people have the right to organize to fight for what they believe in, no matter how small that cause may be in your eyes, then you need to re-familiarize yourself with the basic tenets of democracy. No, we cannot cure all the ills of the world - there are too many, and we are too small. But we all do what we can, and it beats sitting on our asses mocking people we don't know who are actually out on the hustings attempting to get something accomplished for all of us. "Think globally, act locally" - it was true when it was first coined, and it remains so to this day. Stop sneering, get off your high horse, and go out and try and make a difference, whatever that might be.

This is f*cking awesome.
We are gonna FIGHT TO THE END!
F*CK 7-11!
We are all gonna use our voices to STOP the corporate chain takeover of our beloved neighborhood and work to get zoning laws like the UWS and San Fran. This is about the betterment and future of the entire city, not just disgusting slurpees and frathead idiots trying to bring the midwest with them to New York.
This neighborhood has deep roots in activism and progressive politics and a serious commnittment to building and protecting social equality and healthy community.
7-11 has no place in a healthy community. 7-11's and other chains makes communities weak and unhealthy in NYC 2012 and there have been endless studies and research that prove that perfectly.
The East Village is not gonna bend over and be railroaded by Bloomberg's love affair with heartless corporate conquests designed to gut the soul of our city. I am proud to be a part of this VERY IMPORTANT battle!
Fight the good fight people.
The world is watching now. Ha

To Mr. or Miss 'Confoundingly Dumb'-

Perhaps there are larger issues in the world right now, but that doesn't take away from the significance of a community's voice to oppose something they don't want in their enviornment. If somebody set up shop in your neighborhood, something maybe the opposite of a corporate chain or a 7-Eleven like say an S&M bar, or a revolving art installment or monument that you found unsightly, I think you and the citizens of Confoundingly Dumbville just might band together and say something about it, no? Would the problems of the world matter then? Or would you just submit to it an call it a day? I don't think so. To paraphrase Fran Leibowitz "I have nothing against wild animals but I don't want them in my neighborhood. They have their environment, I have mine."

7-11 states in so many words that they want to make things easier for the community, because we're young and on a 'budget'. We already have several independently owned convenience stores in the East Village, it's as 'easy' as it's going to get. So who's kidding who? Please, tell me what 7-11's REAL objective is.

The simple fact is that people whether they live or visit the East Village don't come here for corporate chains. When I visit other historic neighborhoods outside of New York City, I don't want to see them either. Enough of the white-washing. This mass corporatization of culture only promotes one thing. Money in the pockets of shareholders. For the rest of us it promotes a flat narrative in the time we have here on the planet. Not to mention bad, unhealthy food sold to 'people on a budget'.

So please think about what your dismissing before you actually dismiss it, okay?

Having one 7Eleven in the EV isn't the end of the world. Having FOUR 7Elevens in a span of 11 blocks and more slated to come is an aggressive tactic to choke the native species to allow for greater profit. That this will narrow choice, harm small businesses, help hike up commercial rents, and further homogenize neighborhoods in NYC makes no difference to this TEXAS BASED company.

Yes, fighting the corporate gormandizing of our neighborhood is just a drop in the bucket when you look at the whole world. But because a job is big and seemingly overwhelming; you don't just roll over and pull the covers over your head. Okay, you do at first. But then you get up, pull your head out of your ass, consider something and someone other than yourself and GO DO SOMETHING! Something, anything, every little tiny action DOES make a difference. Because when "they" tell you that you are helpless and that you don't matter: "THEY" ARE LYING!!!

When I came to NYC in 1986 at the age of 20 I wanted to get as far away as possible from all of the mind-numbingly boring aspects of the 'burbs I had been subjected to. Seeing a 7-11 or any other corporate mainstay of the town I just left was not on my to-do list. What is it about 20-somethings now that make them want to continue patronizing the boring, genericized corprate chains they left behind when they said goodbye to mommy an daddy? I'll never get that.

Many years ago (in the '70's actually) I lived upstate in a city that was over-run by 7-11 stores. At one point there were something like 5 of them within a 5minute drive from my house. This was on top of full-line supermarkets, mom and pop drive-up's, gas stations that sold grocery items etc. It was like a red,green and neon white apocalypse.

Then, strangely, they started to close. One by one, all the little 7-11's turned into real estate offices, hair salons, etc. Within 2 or 3 years most of them were gone and the 1 or 2 that hung on eventually changed, dropping the franchise and becoming independents. As usual, all the real money in the franchising business is made by the franchisor and the franchisee's live off the crumbs. Because of the up-front fees that you have to pay, it's in the best interests of 7-11 corporate to flood an area with franchises and let the owners deal with the aftermath. very few make it in the long run.

Be patient, EV and LES and don't let the bastards wear you down.

All that fast food and soda they sell is poison anyway...
Very few things of value sold in these joints

While 7-11 itself is Texas-based, ultimately it is Japan-based.

many years ago 7-11 did well in the suburbs and rural areas where most of the stores closed early and the only place you could get anything at night was a bar or a chinese restaurant in one of those little mall type cluster of stores.
they weren't as attractive as supermarkets started to stay open all night as did some local delis.

It's silly. I will never go into a 8-12 but when the knife is this far in it's a bit late to call the ambulance.

U peeple are sew dumb why dont you get a harecut and a job hippies! I WANT MY SUPERSIZED SLURPEE STOOPDS!
just kidding! Fuck 7/11. If they open now i will cage fight them with the Bagel Guy and put an end to this. All the ones I pass by are empty with kids spare changing in front of them. May they all close and reopen in the 7th circle of hades.

Its not dumb to people who love ny.you can go to any shithole town and get the same 711 crap as anywhere else. We cherish the character and diversity off community owned businesses that benefit many small owners instead of one rich guy from somewhere else owning every cookie cutter convenience chain. Whats dumb about that?