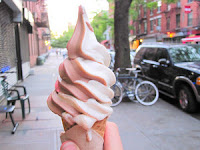 The Post reports on the apparently bitter divorce between Derek Hackett and Blythe Boyd, who opened the popular vegan ice cream shop on East Sixth Street between Avenue A and Avenue B in 2008. They were divorced last year.

[E]arlier this month, Hackett filed papers in Manhattan Supreme Court demanding the business be dissolved because Boyd is hoarding the profits for herself.

Hackett claims that his ex-wife has completely frozen him out of the business despite their equal ownership and that profits are tanking, court papers show.

“Boyd has substantially cut the hours of the retail location during the busiest season, the late spring and summer months, and as such continues to operate to the detriment of the shareholders.”

However, Boyd told the Post "that she did all the work — and that Hackett just reaped the profits and used them to pay his rent."

NOOOO!!!!!!
We need to hire our own divorce lawyer now. Send them to a mediator and keep serving us our crack - I mean ice cream.

oh no! i love this place!

It is sad when people don't like each other. This is a great place and during the summer I go there at least once a week and then sit in the creative little garden and enjoy my ice cream. My favorite flavor is the cake flavor. I really hope this place stays open it is such a gem.

I have never been there but I hope the product is not a bitter as the owner.

Frozen him out - HA!

Wait a second... This Hackett guy looses all credibility when saying that Boyd cut the hours during the spring and summer. I used to stop in for a scoop on my way to work every Tuesday. It wasn't until the winter that they cut the hours. I imagine that ice cream is seasonal, so I get it. I hope this gets worked out... I really like that place.

To counter, I remember reading about it in a magazine write-up and stoping by in summer during prime-time and it WAS closed, so who knows?

What is sad, is that a personal matter has become public. The New York Post is a trite "news"paper that drags names through the mud for profit.

That being said, the dissatisfaction between these two has been building for many years. As a former employee, devoted fan, and, I flatter myself to say, friend of both owners, it would be excruciating to see this shop close... plus I'd have to get a cover up for my tattoo.

I wish not to discount the importance of both Derek and Blythe during my 2 years working at Lula's, but will say Blythe has always had a stronger roll at the shop and, from what I hear, has only increased her role out of necessity. While Derek worked to develop many flavors and batches of ice cream as well as help keep a relaxed and friendly vibe to the shop, most if not all business matters were left to Blythe in addition to assisting in developing flavors, preparation, and jovial spirit of Lula's.

Hopefully this can be resolved with minimal damage to either party as well as the beloved Sweet Apothecary.

They should stop being such dumb ass children... The love is over, stop trying to fick with each other... Ugh bitter divorces is like so last year!

no matter the credibility of either side, she shouldn't be airing out their personal dirty laundry for all the world to see. it's just bad taste.

Its not "ice CREAM", folks, its ice wish fulfillment.

Believing what's written in the Post is also in bad taste... and so last year!

I'm sorry, but are EVGrieve readers really this passionate about the failed marriage of vegan ice cream purveyors? This comment section is weirdly active.

If Lindsey Buckingham and Stevie Nicks can still work together, they should be able to!

This place is one of the best additions to the EV and I can't imagine the warm weather without it. It has such a great vibe when you go in so I'm saddened to hear about the back story.

At least no one posted a sign saying someone has a small penis.

I will continue going to the Big Gay Ice Cream Shop for drama-free ice cream served by fun, friendly people.

I hope it stays. If it does please try the chocolate soft serve. It's the real thing and no cholesterol. I'm vegetarian not vegan but I never eat regular ice cream because the cholesterol is off the richter scale. I really like Blythe. Please stay.

"If it does please try the chocolate soft serve. It's the real thing and no cholesterol."

How can vegan ice "cream" be the "real" thing? Its real, alright, really not ice "cream".

I agree 100% with Brad, however I will note that during my 1 year tenure as a scooper at Lula's Blythe was the head honcho and it was very clear that Derek was not keeping his end of the bargain.
I wish only the very best for Blythe.

i have been a customer since lula's opened . blythe has always been the main person there , in work and in spirit . she makes the place . she and the ice cream together are why i became a steady customer . the guy , derek , has become nonexistent . and from the little i know , wasn't doing his share of the work . it's obvious that he planted this story in the post . it's embarrassing and deplorable that he would do such a thing . he doesn't deserve to get anything for not doing his part . partners are supposed to split the work , not just the rewards . he should grow up and move on , and stop being a baby .

Divorce sucks all the way around and I think it would be mortifying to have details become tabloid fodder for public consumption. What I worry about is our future consumption of Lula's delicious frozen treats! Maybe a backer could come in and buy out his share, it seems like it can be a viable, profitable business, and with the news I'm sure the community could rally behind and support it during the rough patches.

I wish there were like buttons on comments because Brad, I have to say "HA!"

Lula's hard serve is made from a cashew base which is fantastic. The soft serve, which I've never tried, is soy based. Usually I find soy ice creme unenjoyable but the cashew base really changes things up. It is delicious.

I would guarantee that if someone served any vegan-haters here a scoop of their hard serve you would never know it was creme instead of cream. It's that good.

I have tried to make cashew based ice creme at home and since I don't have a $500 Vitamix it isn't possible to get that creamy flavor. Cashews are a standard substitute for vegans/dairy free diets because they have very little flavor and after soaking, the nuts grind into a paste that is a perfect base for a cheezy or cremey substitute.

NYGRUMP - get over there and try it before it goes away, I promise you will find real satisfaction and then be sad at the prospect of them closing.

NYGrump I've tried soy, coconut, hemp but the nut based one really tastes like ice cream. Who knew?

Hmmm the footnotes on the soft serve say that it is nut free, but I could be wrong. In either case, hey make an amazing product and are one of the real additions to the hood, hate to see them go.