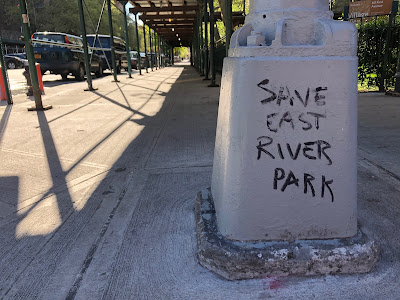 Caught this item in a Politico e-newsletter on Thursday... the first update that I've heard in awhile on the East Side Coastal Resiliency Project, which includes demolishing and rebuilding East River Park ... the full story is behind a paywall:

An ambitious project to protect the Lower East Side of Manhattan from future storms is again facing delays. The city had been scheduled to break ground on the $1.5 billion project this spring, but is now scheduled to begin construction in September, city officials said during a Council budget hearing Wednesday.

The development marks the third delay for the major resiliency effort that was first envisioned in the wake of Hurricane Sandy and is meant to safeguard one of the city's most vulnerable areas to sea-level rise. Still, the de Blasio administration said the city’s five-year timeline for the project should remain intact, despite a delayed start and the ongoing coronavirus pandemic that has delayed some construction work throughout the city.

“I’m actually moving forward under the assumption that we’re still going to maintain our timeline,” said Lorraine Grillo, commissioner of the city’s department of design and construction.

On Feb. 6, opponents of the city's plan announced an Alienation of Parkland lawsuit on behalf of East River Park Action, a grassroots neighborhood group, and 90 other plaintiffs.

Is there a newsletter, etc. to stay up to date on the project?

In the current financial climate, where is this money going to come from? This entire project is a misguided mess.

Bullshit. It's going to be a fake, plastic park like on the west side? :-(

Earth to DeBlasio: what the city needs right now is new infrastructure to survive both this and future pandemics, and massive assistance for the small businesses that have imploded and will disappear without your help. People are already fleeing the city for the safety of the suburbs and cities in the Midwest. With the loss or thousands of small businesses and tens of millions of tourists for the foreseeable future, this city will soon look like a gentrified version of the Great Depression This project can wait. It is time to put protecting people over protecting property now.

This is so terrible to hear that this project may be moving forward, despite the current health crisis that has driven so many thousands to this park as the only significant green space in the incredibly underserved Lower East Side. My time here this spring has really brought home how deep and rich the biodiversity is--this spring I've seen warblers, a red-tailed hawk, cat birds, mockingbirds, a wide variety of butterflies and bees, all the beautiful flowering plants and perhaps most of all the incredible trees, including old oaks that are decades old. One oak in particular I have sat next to, finding solace and peace--its bark holds ant colonies and spiders, and I saw an oriole way up in its branches just a week ago. This can never be replaced. If this project goes forward in the fall, I can only see the entire population of the Lower East Side and the East Village revolting at the loss of this precious green space that has probably held the mental health of an entire area together. DON'T DO IT. Spend the money on schools and social services instead!

Expect the usual pol boilerplate about "thousands" of jobs.

In an era of peak idiotic public policy this makes the top 10. It was an awful idea before the pandemic, it's worse now. Hoping there's some way to tie it up in the courts until DeBlasio goes off to where ever but probably not.

Hello? I thought our city is broke. Where in the fuck is the money coming from? This allocation of funds should be devoted to more pertinent issues with residents and businesses.

Unfortunately, not sure how much, but for better or worse, a large chunk of the $$ is earmarked federal funds that can only be spent on this project.

We need temporary flood protection along the East River right now. Hurricane season is approaching. This terribly flawed plan offers no flood protection for five years or more. To spend $1.4 billion, deny our community open, green space and not put up interim barriers is worst than incompetent.

Should go back to the original plan, building a berm along the western edge. It was much cheaper, and would reduce the noise and soot from the FDR. Yes, the park would flood given another superstorm, but that’s not such a big deal. It was pretty useable within a week or so, post-Sandy.

Let’s see how this goes over in the City Council when they have to lay off thousands of police and teachers and firefighters. I smell a rat here and anyone who didn’t become suspicious about this project when they suddenly changed it in midstream into a plan to destroy the park was not paying attention. The idea that it is still going forward with no changes in spite of the major financial crisis ahead is a major red flag that someone is getting either paid off or trying to jam it through before major budget cuts hit. Many experts interviewed on a PBS special said this would not work, the community does not want it, and the city and state have no revenue now and face major deficits. How this $1.5 billion project is still in the works needs to be investigated.