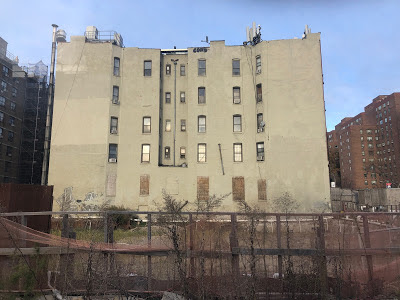 And now it has yet another new owner. As Bisnow reported, Shulamit Prager’s Opal Holdings sold the property to Madison Realty Capital for $31.3 million.

Opal had plans for a 50-unit mixed-use building on the site.

There hasn't been any construction activity at this site since the end of 2017. However, there has been some behind-the-scenes wrangling. In May 2019, PincusCo examined city records to find that several developers have spent hundreds of thousands of dollars to lobby the city for NYCHA air rights. (The latest listing noted that "additional FAR" is available.)

According to the PincusCo investigation, Madison Realty Capital hired one of the city’s most active government lobbying firms, Capalino+Company, to approach the NYCHA about the air rights at Campos Plaza II adjacent to this property.

This past November, a new listing for the property positioned the corner as a "unique build-to-suit opportunity." According to the listing at Lee & Associates, the site "can be developed as a residential/commercial mixed use building" that's "ideal for schools, health care/medical, not-for-profits, retail." There wasn't a mention of price.

Also: In January 2019, the Commercial Observer reported that Second Avenue Deli owner Jeremy Lebewohl filed a $10 million lawsuit alleging that his five-story residential building at 642 E. 14th St. sustained damages by the foundation work next door at No. 644.

As for the most-recent stalled development, here's what was in the works in September 2016: A 15-floor building with 50 residential units with 8,064 square feet of retail space and 21,575 square feet of community facility space." 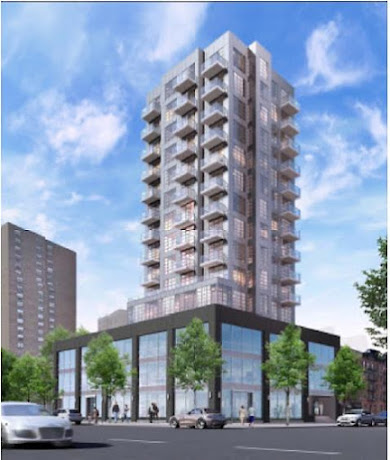 [2016-era rendering of the development]

Previously on EV Grieve:
• Development back in play for East 14th Street and Avenue C

• Report: New owners for the empty lot at 14th Street and Avenue C
Posted by Grieve at 6:00 AM

That is such a horrible corner overlooking con ed plant !

Whatever happens, I'd better still get the opportunity to rent a stupidly overpriced apartment far from transit with floor to ceiling views of a power plant that I can inhale the products of from my 3x6 balcony.

Am ugly over-priced apartment across from ConEd in the middle of a Depression- who could say no?

You know that site would be just PERFECT for an auto parts store!