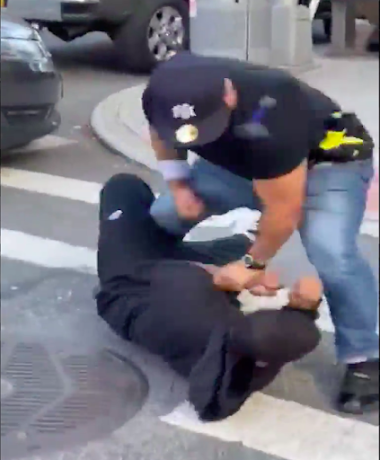 Several NYPD officers involved in the violent arrest on Avenue D on May 2 will face disciplinary charges, The New York Times reported.

Investigators with the New York Police Department have recommended misconduct charges against three police officers, including one who sat and knelt on the neck and upper torso of a man he was arresting, a maneuver similar to the one used in the death of George Floyd in Minneapolis, two people familiar with the matter said.

It is unclear what charges the officers, including Francisco X. Garcia, will face in connection with the investigation of the May 2 incident ... one of several police encounters that led to accusations of racial bias in the enforcement of social distancing, according to the two people, who spoke on the condition of anonymity because they were not authorized to discuss an internal police investigation.

Departmental charges are expected as soon as next week.

Garcia, who's stationed at PS4 on Avenue C, was stripped of his gun and put on a desk assignment following the ugly confrontation when an attempt to enforce social distancing rules escalated.

Garcia and his partners originally approached a man and a woman outside the corner deli on Ninth and D over a lack of social distancing, police officials previously said. This encounter reportedly led to an arrest on marijuana and weapons charges.

As seen in a widely circulated video shot by a witness, Garcia, who was not in uniform, then walks toward several bystanders, including Donni Wright, a nearby resident who works for the NYCHA. Police officials originally said that Wright took a "fighting stance," which led Garcia to shout the n-word and brandish a taser before wrestling Wright to the ground and kneel on his head. Back to the Times:

Afterward, the officers filed charges accusing Mr. Wright of assaulting a police officer, but a spokesman for the Manhattan district attorney’s office said on Friday that prosecutors had dropped the case on May 18. The spokesman, Danny Frost, said prosecutors were still reviewing the officers’ conduct.

As previously reported, the city has paid out nearly $200,000 to settle lawsuits involving Garcia, an eight-year veteran.

Gothamist had more details on some of these incidents:

According to a complaint filed in 2013, Garcia allegedly told a woman eating with her partner inside a Harlem restaurant that she "dressed like a man." When the woman attempted to get his badge number, Garcia allegedly pushed her, then replied: "Take a fucking picture of it, fucking dyke." The city settled that suit for $8,500.

A year later, Garcia was accused of wrongfully arresting a man trying to visit his girlfriend inside a Washington Heights NYCHA building. According to a federal lawsuit, which the city settled for $27,500, Garcia "forced [the man] to the floor face-first," then punched, kicked, and clubbed him.

Meanwhile, Wright "filed a notice of claim announcing his intention to file a $50 million lawsuit against the city."

"The video, pictures of the truth, clearly call for a criminal investigation of this matter," Mr. Rubenstein said. "The evidence is there."

For further reading: Gothamist has coverage of last night's protest — touched off by the death of George Floyd — in Lower Manhattan and Brooklyn, which saw the NYPD dousing the crowd with pepper spray and using batons during arrests. More coverage at PIX11.

Previously on EV Grieve:
• In aftermath of Avenue D arrests, pols want answers from city on how social distancing is being enforced

• Caravan protest on Avenue C addresses racial bias and police violence in social-distancing arrests
Posted by Grieve at 10:00 AM

officer Garcia, 8 strike and you're out. get rid of this man before he kills someone he has already cost tax payers more than he's worth and is a shit stain of the police force.

So it seems like the chokehold has been replaced by the knee to the neck in police departments from New York ti Minneapolis. Who is teaching these cops it’s OK to behave this way? Not only is it time to weed out the racist cops, its time to stop hiring the violent cops and to weed out the ones who like to use their badge to get out their violent aggressions.