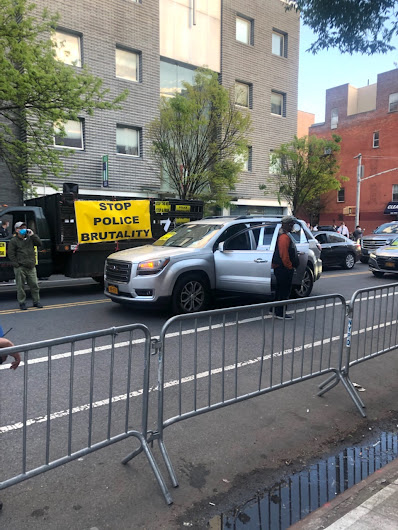 Dozens of protestors, accompanied by community leaders, gathered outside Police Service Area 4 (PS4) on Avenue C and Eighth Street last evening to speak out against racial bias and aggressive enforcement of social-distancing arrests.

The incident, caught on video, shows Garcia punching and tackling Donni Wright, a local resident and NYCHA groundskeeper, while shouting the n-word, brandishing a taser and subsequently kneeling on Wright's head.

The Rev. Kevin McCall of the Crisis Action Center was said to organize last night's caravan protest, which included three stops at precincts in Brooklyn. This came on the heels of a New York Times report that revealed that 35 of 40 people arrested by the NYPD for not socially distancing in Brooklyn were black.

"[T]hey were beating us up before social distancing," local activist Shaheeda Smith told PIX11 last night. "Right here on the Lower East Side, they're doing this to Donni Wright. But on the East River, there are people running with no mask on. Not bothering with social distancing. Right at Tompkins Square Park, people are sitting down with wine in their hands, and we're getting thrown down to the floor."

Jill Woodward shared this footage from Eighth and C...

First they came for the young black youth...

Power and support to these peaceful protesters. It was an outrageous incident and who knows how many more weren’t caught on camera.