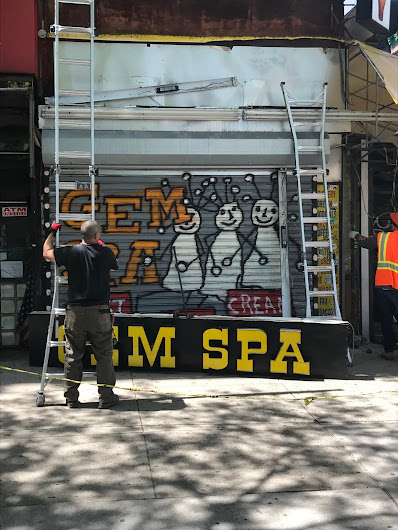 This afternoon, workers took down the Gem Spa signs from the now-closed corner shop-newsstand on Second Avenue and St Mark's Place (photos below by Steven)... 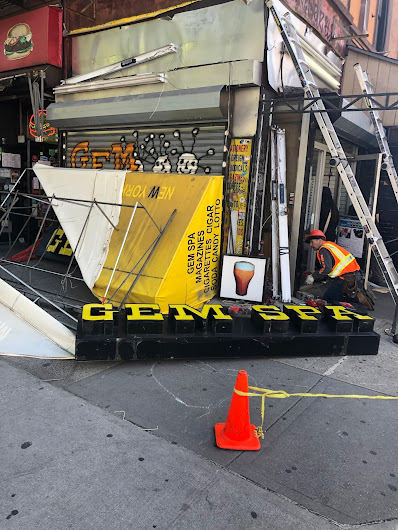 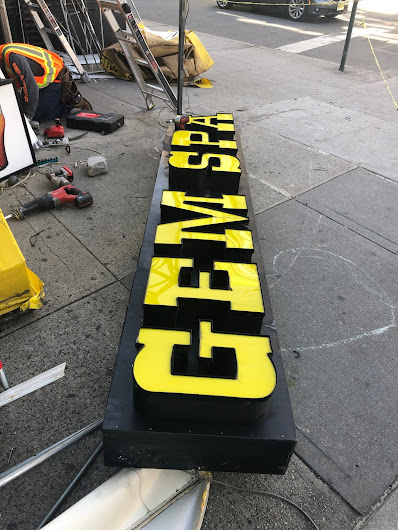 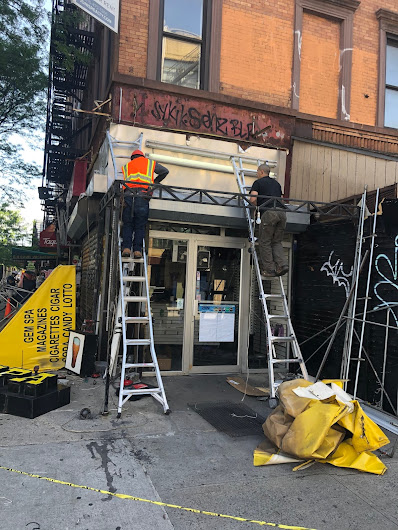 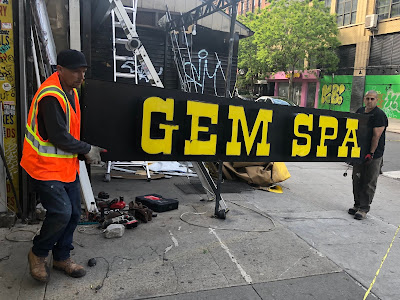 Parul Patel, who had been the running the shop that her father Ray has owned since 1986, told me that she intends to sell the Gem Spa signs, and has a few suitors already. She was at the scene overseeing the removal today... 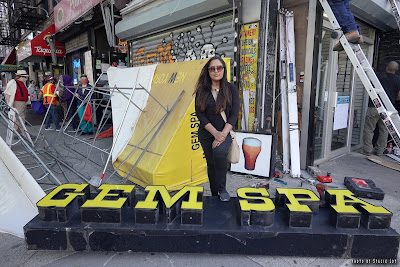 She also plans to auction the rolldown gates that East Village-based musician-artist Paul Kostabi painted last September, splitting the proceeds with him. (She will also continue to sell Gem Spa merchandise online.)

The iconic shop, home of the egg cream, officially closed on May 7 amid ongoing financial challenges, exacerbated by the COVID-19 crisis... 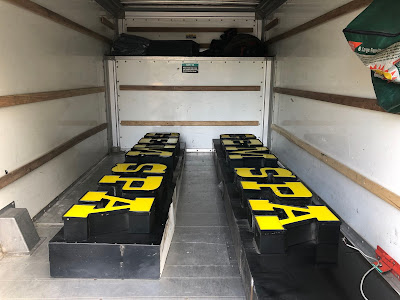 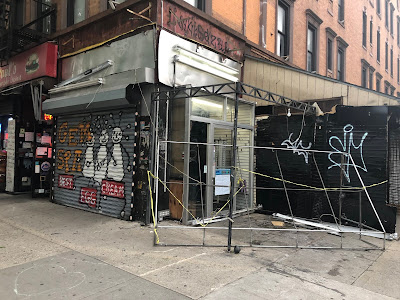 I still cannot believe this happened.

An iconic part of this area just wiped off the face of the earth in less than a week. It is a loss in so many ways; and I wish the Patel family the best for the future. Certainly Ms. Patel has done everything she could to keep Gem Spa going, and I applaud her.

I have lived in this area long enough to remember GEM SPA *before* Madonna was filming there, and it was always a welcoming beacon on that corner. If you had to give directions to anyone, GEM SPA was un-missable, and I remember when they carried all the out-of-town newspapers and a zillion kinds of magazines, from the mainstream to the obscure, along with their legendary egg creams.

I've always thought that if you moved to the East Village, it should have been a requirement to make a stop at GEM SPA early on in order to really call yourself a local. Now it's gone, one more victim of a greedy landlord and Covid. The landlord gets most of the "credit" for GEM SPA closing down, IMO, b/c if they wanted it to continue, they'd have worked with Ms. Patel to make it happen.

Anything that moves into that space in the future will be a bland boring nothing, compared to GEM SPA. Ms. Patel, thank you for how hard you worked to keep it open. We'll miss you & GEM SPA very much.

Cadillac with the tiger in it guy said...

My late Mom used to say, “If you can’t say something nice about someone don’t say anything”.
Sorry in advance, Mom... While l lament the passing of nearly all of the long-time EV shops I ain’t shedding a tear on this one for personal reasons. Last summer, I went into Gem Spa and the guy
charged me $7.50 for an egg cream. That’s right, $7.50! For years it was $1.75 then it went up to $2.50. I understand that the store was already in its economic death throes, but the guy behind the counter knew my face and that I was a customer for several decades. When I complained and asked about why it was so expensive he lied and said “That’s what it’s always been.” Charging a tourist $7.50 is bad enough, but doing it to a long-time local isn’t cool. Plus, they started to lose me when they got rid of Zoltar.

Well, we still have Ray's.

I grew up in the East Village from the mid 60s to 1979,our final rent for our four room railroad walkup on E 12th St was a paltry $138.76 per month..good old days! Greed has killed The Village,and our city. As I am still mourning the loss of both Mary Help of Christians Church on 12th and A,as well as the famed De Robertis Pastry Shoppe on First Ave,this is yet another wound torn in our hearts and in the fabric of what once was a great and legendary neighborhood. Covid 19 was merely the icing on the cake,but Gem Spa,and the East Village,suffered at the hands of far worse and insidious enemies who have laid waste to it..gentrification,and an out-of-control real estate industry. Let us rise up to save whatever is left,before it's too late.. Valentino O.

So sad to see it end. Thank you for everything ❤️