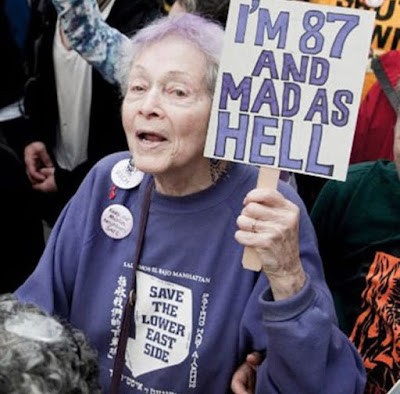 Frances Goldin, a lifelong preservationist and community activist, died on Sunday in her East Village apartment, according to published reports. She was 95.

As The New York Times noted, Goldin, who was born in Queens in 1924, "won her first street brawl when she was 11 and as a grown-up never stopped fighting to safeguard her beloved Lower East Side from upscale developers."

Here's more from the Times on her remarkable life:

An unreconstructed socialist, Ms. Goldin was an advocate for affordable housing and a staunch defender of the poor.

Her activism extended over two careers. In one, she was a civic leader in a vintage neighborhood that was being gussied up with fancy names (“as soon as they said ‘East Village,’ they tripled the rent,” she told The New York Times in 1984) and studded with asymmetrical buildings girdled in glass.

In the other, from 1977, she was a literary agent who represented progressive authors, including Susan Brownmiller, Martin Duberman, Juan Gonzalez, Robert Meeropol, Frances Fox Piven and the New York City historian Mike Wallace. The novelist Barbara Kingsolver chose Ms. Goldin on the basis of her advertisement that read, “I do not represent any material that is sexist, ageist or gratuitously violent.”

Goldin was the founder of both the Metropolitan Council on Housing and the Cooper Square Committee.

Remembering our fierce and inspiring co-founder, Frances Goldin, who passed away on Saturday. Her legacy is enormous, much like her love for the Lower East Side and for all communities struggling for social justice.

Very sorry to hear that Frances Goldin, legendary Lower East Side activist, has died. Charismatic, brilliant, charming, combative – but she got things done. Housing was built. Neighborhoods saved. People were brought together in common cause. One of the greatest of New Yorkers. pic.twitter.com/ThXdIWu7Vf

We were deeply saddened by the passing of Frances Goldin this weekend. She was a giant-slayer, @CooperSq co-founder, social justice fighter, preservationist, and passionate community leader. Read our past birthday tribute, incl her wonderful oral history: https://t.co/RMCWWukAym pic.twitter.com/3Jz6v1rr0q

My former boss Frances Goldin passed away over the weekend. She was a literary agent and activist who dyed her hair with Manic Panic at the age of 95. A true legend. I feel so lucky she was in my life. The city won't be the same without her. https://t.co/40ro72fSKL

RIP Frances Goldin. Frances always fought the good fight and her strong sense of community was animated by her principles of fairness and inclusion.

The #LES is a better place because of this fighter who refused to be intimidated by the establishment. https://t.co/mZOAaeNT1d

She is survived by two daughters, Sally and Reeni Goldin, and a grandson.

As a true socialist, it is understood the struggle is for land, not identity. One of our giants has passed.

Fran Goldin was absolutely one-of-a-kind and this neighborhood was beyond lucky to have had her here to care about the people and the buildings of this area.

Fran would have made a difference no matter where she had been an activist, but I don't think people appreciate what this neighborhood would be, or would look like, if she hadn't spent her ENTIRE adult life fighting to help people here and to preserve housing.

She outmaneuvered Robert Moses, which is a hell of an achievement.

Rest in peace, Fran, you did your job astonishingly well. I offer my sincere sympathies to her daughters, to her grandson, and to all who loved Fran. 70 years of devotion to the cause! We will not see her like again.

RIP Fran - a true legend and hell of a brawler.

How sad...4 comments on this post which tells the passing of one of the most important people of this neighborhood of the last 50 years. Yet the closing of Momofuku elicits double the comments? It was what it is...

The new senior apartments in Essex Crossing are named after her.

It is a shame that I did not know of this great person until hearing the news of their passing, even as someone who considers themselves aligned with a lot of the causes she clearly spearheaded.

May her spirit and memory live on and further inspire us all to take up her fight right where she left off.

I only just found out about Frances passing (another sign of how disconnected we are during this pandemic?) and I’m heartbroken. I knew her through my parents who were also lifelong activists and not only was she a total powerhouse, but also a really kind and caring person. I know there was a documentary in the works called It Took 50 Years though to my knowledge it hasn’t been completed. I’m so sad I’ll never see her again—a one woman protest walking down the street with a message pinned to the back of her jacket. x