ICYMI: Momofuku's Ssäm Bar moving from the East Village to the Seaport 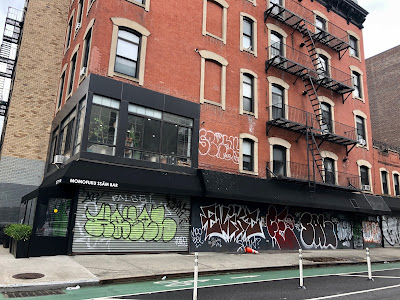 ICYMI: Back on Wednesday, David Chang announced several changes/closures to his global restaurant empire as the fallout from COVID-19 hits the A-list ranks.

Among the coming changes: Chang is moving the nearly 15-year-old Ssäm Bar from Second Avenue and 13th Street into the space that houses Bar Wayō at the South Street Seaport.

Here's part of the message posted to the Momofuku website:

[W]e have decided to move Ssäm Bar from the East Village to Wayō’s much larger space at South Street Seaport and combine the teams of both restaurants. We loved what we created with Wayō, but we have to focus on our restaurants with the most potential. It would be hard to think of a better candidate than Ssäm Bar. Its lease expires in January 2021 and over the last fifteen years has probably changed more radically than any other restaurant of its kind—and thrived in the process.

With more space for guests, multiple entrances, and a new kitchen, Ssäm Bar at the Seaport is better suited to the new realities of restaurants. Not only that, we’re also excited to incorporate elements of Wayo’s menu and service into the new Ssäm Bar. With tabletop cooking and karaoke rooms, the new restaurant will carry on Ssäm Bar’s legacy and celebratory spirit. And don’t worry, John McEnroe is coming with. We are still working on sorting out the details and will share more as we develop the project.

The Ssäm Bar had a large footprint on this corner... curious to see who/what might take this space over one day... 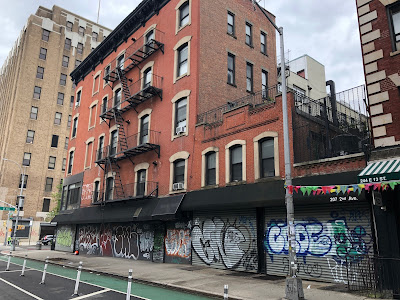 Milk Bar had retail space on the 13th Street side before moving across the street in May 2011. The cocktail bar Booker & Dax was then here until October 2016 before Ssäm Bar expanded.

Meanwhile, Eater checked in with a think piece titled: "If Momofuku Is Closing Restaurants, What Does It Mean for Everyone Else?"
Posted by Grieve at 5:15 AM

Looks as if NOTHING is going to replace these empty spots for a LONG time. Landlords, Listen up and pay attention...

Another empty corner storefront that will stay that way for years to come unless the commercial landlords start to understand that the rents they want are just too high especially now after the Covid-19 virus has left a glut of empty stores in the EV exacerbating an already big problem for the neighborhood. Who in the right mind will open a restaurant or bar in this environment? At full capacity they could barely make it. At a 6 foot social distancing norm it will be literally impossible to make a go of it without charging four times what they used to charge.

Big real estate plays a long game because the current tax code allows write offs of empty space at a premium rate. Until someone bucks the real estate lobby, read: someone else is Mayor, vacancies aren't a problem as long as other properties are in profit and being taxed.

That makes one less overcrowded trendy corner. I live one block away, have never have eaten there; have never been even tempted to eat there by either their menu or their vibe. It always looked like a chic dark unwelcoming space meant for the "right sort" (young and traveling in groups, ready to eat a large amount of pig in a loud location). It was off-putting to many; certainly not a place for a quiet meal in comfort.

Good luck at South Street Seaport (you can't get there from here!).

RE 10:00 "there is no benefit to the landlord derived from leaving retail space vacant"
https://www.westsiderag.com/2019/03/21/the-answer-column-do-landlords-get-tax-breaks-for-vacant-retail-space

"certainly not a place for a quiet meal in comfort."

That's not always what a person wants (especially not in the EV). There are plenty of niches for a restaurant to fit into. Ssam is imaginative food in a lively and unpretentious atmosphere (calling it "chic and dark" tells me that you have no ability to parse a restaurant's atmosphere!). Not where I would go for dinner with Mom, or to comfort a friend after a loss. There are other restaurants for that. But always somewhere I would go for a very tasty meal, especially late at night.

@Sarah: *I* never said that one *ALWAYS* wants a quiet meal - YOU said that!

BTW, if you think that that restaurant is "unpretentious" rather than "chic," then you must have missed its opening years, when it was THE place to be seen, and THE place to BRAG about having eaten, no matter what you thought about the food.

In restaurants and bars, "lively" is just another word for "loud." I'm beyond needing to eat in a loud-enough-to-damage-your-hearing & deliberately uncomfortable dining room, thanks!

So, no, there's nothing wrong with my ability to "parse" a restaurant's atmosphere (and "parse" is a very strange way to put it).

Not to be a cliche, but I ate there even before it was cool, back when they were still serving burritos at lunch, and all the way through. "Chic" is a whole different vibe. "Popular" and "pretentious" are not the same thing. Honestly, what a sad, stuck-in-high-school mentality your comments display. Most of us grow up and realize that popular people aren't automatically stupid or mean or whatever. We realize how sad and bitter it sounds, trying to reject people before we can get be rejected. If you'd ever actually gone in there, you'd have seen it was perfectly friendly--I am very much NOT in with any trendy crowd, and I definitely judge a restaurant on whether it makes me comfortable regardless. Never had a problem that way with Ssam. But instead, you stood outside and hated, and deprived yourself of some nice meals.

Your comment was expressing pleasure that a critically and financially successful restaurant is closing just because it wasn't your kind of restaurant, as if there wasn't plenty of room for all kinds of places in the NYC restaurant world. Well, now you'll have a nice empty corner to look at and be happy over. Or maybe a Citibank branch or vape shop! Won't THAT help keep the neighborhood special! Mazel tov.

@3:22 pm: The article and comments you linked to raise more questions than answers about why commercial spaces can remain vacant for years. I'm not a real estate or tax expert, but my theory is that there can be substantial tax benefits to leaving a space empty: If you own a number of properties, you can distribute your losses across ALL your properties. So let's say the "market" rent for Property A is 25K/month. If you cannot rent it at that price, you can leave it empty and declare a loss of 300K for for the year on Property A, which you then can deduct from your total income for the year. If you are in the 37% tax bracket, that means you've saved 111K in taxes. Unless you can rent Property A for more than 111K, there would be no advantage in renting it. Furthermore, by renting it for less than 300K, you've decreased the value of the property, if you want to borrow money to buy MORE properties. (I've read that a lender will use the potential rent to value the property.)

Also, many owners have illegally extended there first floor commercial spaces into their backyards, which means they now expect a lot more money for spaces that might have been affordable to small businesses. Since they have dramatically increased their potential rent, they can afford to sit back and wait for someone willing and able to pay an exorbitant rent with the hope of winning the New York City jackpot.

(Ssam was a bit intimidating from the outside, but it was not especially pretentious once you were inside. The food did not meet our high expectations the couple of times we went.)

Absolutely right, and a REBNY spokesperson accidentally admitted it within the last year. Pre-pandemic, it was much much worse, because instead of deducting the loss of actual rent, they would simply make up a rent that was 5-10x higher than the tenant they just kicked and claim that’s what the market will bear, and then use that magical number for the purposes of claiming a loss against income. It’s technically illegal, but there is no enforcement, and very easy to convert into a quasi-legal bad debt deduction by renting the space to a shell corporation that leaves it empty.