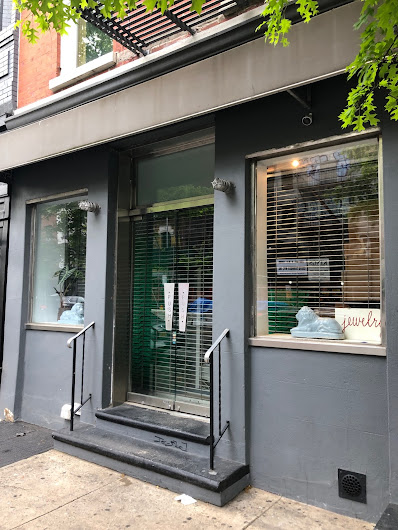 Lori McLean Jewelry is on the move, relocating from her home of five years on 11th Street to 207 Avenue A.

The boutique specializing in vintage and custom jewelry designs had been at 320 E. 11th St. between First Avenue and Second Avenue (after a move from the West Village). The lease was up, and apparently, the landlord had plans for a new tenant (namely a sushi counter, but more on that in another post).

Fortunately, McLean was able to find another storefront in the East Village. Her new space, expected to be ready in early June, had been home here near 13th Street to Obscura Antiques and Oddities until late December when co-owners Evan Michelson and Mike Zohn decided to move on after nearly 20 years in business.

When it came time to find a new shop, McLean said that she wanted to stay in the East Village. "The neighborhood has been so supportive of us and a delight to work in," she told me earlier this year.
Posted by Grieve at 5:35 AM

Related to your latest post, this location was also home to Jane's Exchange before they moved to 3rd Street. It used to be a funeral home.