The Wild Son is now open on 1st Avenue and St. Mark's Place 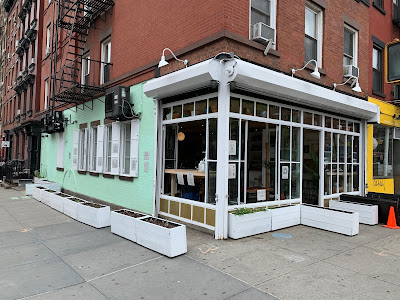 The Wild Son made its EV debut yesterday at 132 First Ave. at St. Mark's Place.

As previously reported, this was to be a second outpost of the cafe, which opened in 2016 on Little West 12th Street.

However, Robert Ceraso and Jason Mendenhall (The Wayland, Good Night Sonny, The Lost Lady) decided not to reopen the original location.

Here's a little more from the restaurant's reps:

The Wild Son’s kitchen is newly headed by Luigi Petrocelli, who previously cooked under Marco Canora at Hearth for eight-plus years, including overseeing its recent transition to a healthier focus. With its casual anytime fare, The Wild Son’s opening all-day menu features sandwiches, salads, bowls and shareable plates.

When the restaurant is able to expand their hours and launch a separate dinner service in the future, the nighttime menu will apply the same philosophy of creative seasonal cooking drawing on influences from around the world to more substantial dishes.

And the current menu... 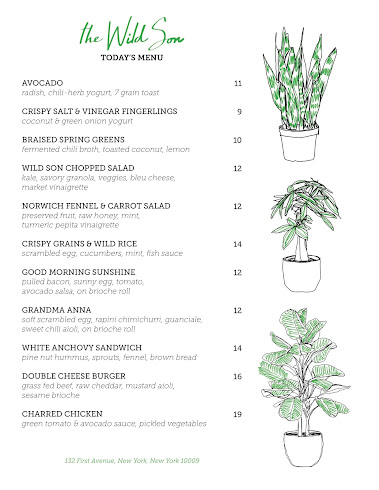 I asked Ceraso why they decided to debut now, as the city remains on PAUSE and the restaurants that are open are relegated to takeout and delivery service.

"We were planning to open the week of the shut down. So the space has been done for a long time," Ceraso told me. "Assuming we won’t be allowed to have customers inside in even a limited capacity until at least the middle of July, we needed to do something. Like everyone else, we need to operate with a limited staff at the moment. This seemed like the best way to bring the food back that customers from the west side had been waiting for, as well as introduce the restaurant to the neighborhood."

The Wild Son is open Wednesday through Sunday from noon to 8 p.m. for pick-up and delivery (no alcohol right now). Find more details and place orders via the Wild Son website.

The corner space was most recently the Rolling Stones-themed Waiting on a Friend, which took over from Colibri and VBar before that. (And yes — St. Mark's Bar & Grill one day long ago.)
Posted by Grieve at 5:31 AM

Takeout restaurants paying rent based on insane heroin-style alcohol profits are not going to be sustainable. The property tax, the rent, the insurance - are all based on the sitdown, dense population alcohol revenue and will not be reduced. The City Council plan to expropriate the public sidewalks for the private restaurants is not a solution. It is a giveaway to the real estate lobby and their massive debt loads.