McSorley's reopens today on 7th Street, and this is what you can expect 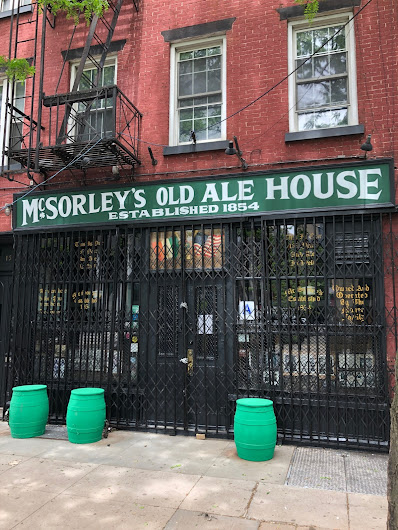 McSorley's Old Ale House opens its doors today after more than a two-month-plus closure during the COVID-19 crisis.

Longtime bartender Gregory de la Haba, whose wife, Teresa Maher de la Haba, is the owner, gave us a rundown on what you'll find at the saloon on Seventh Street near Cooper Square.

"We’ll keep a limited menu of burgers, sandwiches and hot dogs," he said of their to-go items. "And we’ll implement all the necessary precautions like wearing face masks, and we've already installed four hand sanitizers with one at the entrance. Doesn’t quite go with the decor of the aged and charred wood but for now who gives a shit. Safety first."

Food aside, they'll also be selling growlers to go. And you can expect to see some familiar faces when picking up food or beer to take home. "We kept all our staff, and everyone wants to get back to work."

This is also the longest the circa-1854 McSorley's has ever been dark.

"Billy McSorley closed the bar for one full week when his father John died in 1910. Hurricane Sandy closed our bar for five days," de la Haba said. "But we had no closures during the Spanish Flu, the Civil War — or the riots due to [the War] — or any other war or outbreak. But this is also the first government mandated closing."

For now, McSorley's will be serving daily from 1 to 8 p.m. for at least the next two weeks while they see what the city does with a reopening plan.

"The uncertainty into the unknown is what’s driving most business owners mad," he said. "And the 25 or 50 percent occupancy will be the nail in the coffin for most — especially if it lasts more than one month."
Posted by Grieve at 6:00 AM

I didn't see this mentioned but I can only assume they will be selling drinks and people will gather and socialize as with many other bars in the neighborhood. If you see this happen don't hesitate to call 311 and report this or any bar, we are not out of the woods with this pandemic and social distancing has probably save thousands of lives.

I like to think informed adults can make our own decisions without a Nanny State demanding we tie our bibs with only our left hand not our right. You don't seem to have any concern about cell phone radiation permeating our bodies.

Unfortunately Anonymous, we live in a time where we don't have a lot of informed adults. Also, the cell radiation is very minimal, the reports out there are not credible...

you would have done well in the Soviet union. snitch on the neighbors to the state police.

Not
A
Real
Crime

If you don't think cell phones cause brain damage, take a good look around.

25-50% capacity isn't the nail in anyone's coffin. It's the federal government's inability to ensure small businesses have financial support while they have to adjust business practices for important health safety. The government is failing us all.

That's the purpose of selling drinks and food, so that people will gather and buy something, maybe socialize for a few minutes, and maybe keep someplace from closing forever. But go ahead, Rat Squad, keep calling 311 and divert the police to somewhere they're not needed.

I called 311 in mid-April to report construction workers working without masks at a non-essential job site. They said they would send someone out in the next 7-10 business days.

it's RIDICULOUS the number of people gathering outside bars serving booze and just hangin' out NOT wearing masks or social distancing. Most of these people are millennials but not all. It's awful. Apparently the morgue fridge trucks outside the hospitals mean nothing to these people. Shame.

If you don't serve food and drink in your restaurant, you don't make money. If the government says you can't do your job because they're not doing a good job containing something they may have created, you have no choice but to serve,since they're not helping businesses out at all.

It's ridiculous how scared people are to live their life till the same government who could have prevented this situation long ago, are, while waiting for same idiotic government to tell them its okay at some point. Stay home scared. Nobody is stopping you.

I suggest anyone critical of my comment look around this weekend as young adults hang around outside of bars drinking and socializing, some with masks some without, I also suggest joining in with the fun, then lets us know how you feel in 10 days. NYC is the hardest hit city in the US and despite the stereotype of being better informed and more sophisticated a handful of science deniers have left comments here.

The crowds outside bars has indeed gotten out of control. We had to go one street over just to avoid the crowds that were covering both sidewalks as well as the middle of the street. Definitely no one wears masks whilst drinking their drinks. It's insane and felt extremely discourteous. It's not just our street suffering from this- this new bar scene is all over our neighborhood. It makes going out in the early evening feel really fraught.