In aftermath of Avenue D arrests, pols want answers from city on how social distancing is being enforced 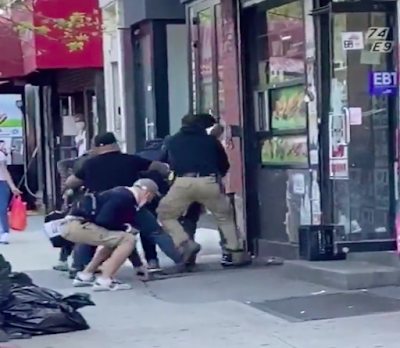 Local elected officials are calling on the city to report on why and how social distancing is being enforced.

The demand comes following a violent arrest on Avenue D and Ninth Street late Saturday afternoon that was captured on video via a bystander.

An NYPD officer, identified as Francisco Garcia who's stationed at PS4 on Avenue C, was stripped of his gun and put on modified duty following the ugly confrontation when an attempt to enforce social distancing rules escalated.

" ... a plainclothes officer can be seen punching and tackling Donni Wright, a groundskeeper with NYCHA, while shouting the n-word, brandishing a taser, and subsequently kneeling on Wright's head. The confrontation began after officers, some of whom were not wearing face coverings, spotted "a number of people not wearing masks" at the corner of Avenue D and 9th Street, NYPD Commissioner Dermot Shea said on Monday.

Shea told Pat Kiernan yesterday that he was not happy with some of the tactics that he saw used in the video. Mayor de Blasio had this to say...

Saw the video from the Lower East Side and was really disturbed by it. The officer involved has been placed on modified duty and an investigation has begun. The behavior I saw in that video is simply not acceptable.

And yesterday, a handful of elected officials, led by local City Councilmember Carlina Rivera, sent Shea and de Blasio a letter asking for "transparency and accountability" in the way the NYPD is enforcing social distancing. 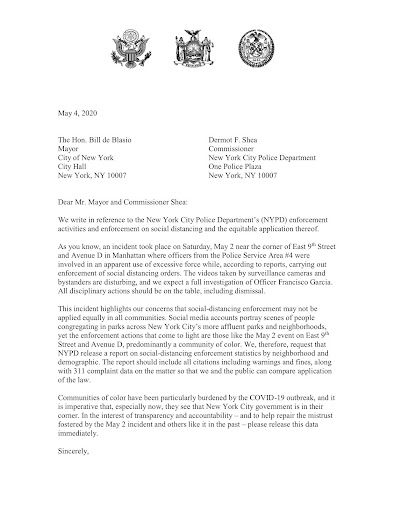 This incident highlights our concerns that social-distancing enforcement may not be applied equally in all communities. Social media accounts portray scenes of people congregating in parks across New York City’s more affluent parks and neighborhoods, yet the enforcement actions that come to light are those like the May 2 event on East 9th Street and Avenue D, predominantly a community of color.

We, therefore, request that NYPD release a report on social-distancing enforcement statistics by neighborhood and demographic. The report should include all citations including warnings and fines, along with 311 complaint data on the matter so that we and the public can compare application of the law.

Communities of color have been particularly burdened by the COVID-19 outbreak, and it is imperative that, especially now, they see that New York City government is in their corner. In the interest of transparency and accountability – and to help repair the mistrust fostered by the May 2 incident and others like it in the past – please release this data immediately.

Meanwhile, as previously reported, the city has paid out nearly $200,000 to settle lawsuits involving Garcia, an eight-year veteran.

Gothamist had more details on some of these incidents yesterday.

According to a complaint filed in 2013, Garcia allegedly told a woman eating with her partner inside a Harlem restaurant that she "dressed like a man." When the woman attempted to get his badge number, Garcia allegedly pushed her, then replied: "Take a fucking picture of it, fucking dyke." The city settled that suit for $8,500.

A year later, Garcia was accused of wrongfully arresting a man trying to visit his girlfriend inside a Washington Heights NYCHA building. According to a federal lawsuit, which the city settled for $27,500, Garcia "forced [the man] to the floor face-first," then punched, kicked, and clubbed him.

The letter also states that the officials "expect a full investigation of Officer Francisco Garcia. All disciplinary actions should be on the table, including dismissal."

Garcia may have acted improperly, and I say "may have" because although I watched the video I do not know what transpired prior to the video, now was I actually there to gauge the mood and words of all parties involved. Innocent until proven guilty is still the law in case you have forgotten. But beyond that I would propose that all who signed that letter (The letter is signed by Rivera, State Sen. Brad Hoylman, Assembly Member Harvey Epstein, U.S. Congresswoman Carolyn Maloney, U.S. Congresswoman Nydia M. Velazquez, Public Advocate Jumaane Williams, Comptroller Scott Stringer and Manhattan Borough President Gale Brewer) go on a ride-a-long with the police in the neighborhood for an entire week and then put out a public statement. I bet they haven't spent any time in the streets during this crisis and they spent only a little time in the streets prior to the Covid crisis.

This is only the tip of the surveillance -- and kleg lights -- that have been ongoing in this neighborhood (Avenue D, 10th to Houston), for the last few years. Perpetuating this, we have a mayor who expresses outrage, pandering to his media image as a liberal, but does nothing.

Two people talking perhaps a little too close. What about the folks waiting for their drinks to go. A whole lot of them, not social distancing nor wearing masks and the business isn’t enforcing it.
We don’t have enough police to social distance everywhere. stopping for these two people doesn’t seem like a great use of resources when there are crowds in other places to break up.

It's not the job of the police to enforce social distancing, but no surprise since Cuomo has turned NY into a nanny state.

I'm not sure how you could look at this incident & decide that the issue is a nanny state and not an institutionally discriminatory police force.

This same officer has on other occasions aggressively menaced my husband and other dog walkers. Mistakenly believing my husband had left dog poop on the sidewalk, he got into it with him, ordering him to pick up the poop. My large dog had clearly not been the one who made the tiny poop. Silly story, but it shook up my husband (as well as other dog walkers this officer has interacted with) and suggests a pattern (now confirmed) of looking for micro-incidents as an opportunity to express his authoritarian rage.

@8:41 Not sure where you're going with the "ride along". To see how dangerous it would be to tell middle aged white people having sidewalk happy hour right next to each other to social distance? To figure the logistics of a traffic crackdown on electric delivery bikes? To face down herds of cellphone chatting thugs pushing strollers in Tompkins Square?
To see if they can time warp back to the bad old days of the 70s and early 80s?

Refusal to give badge number should be an automatic black mark. This particular cop has rage issues and is too expensive to keep on the city payroll. Join the Fire Department and bully burning buildings.

Why is the guy wearing a baseball hat? Since when has that been part of a police officers uniform? He wants to enforce social distancing, yet he’s ignoring state mandate law of wearing a mask. He should be fined, fired from the academy, and booked for assault.

Consider whether you or I would keep our job if our company had to pay out even a few thousand dollars in settlements over our on-the-job behavior, much less hundreds of thousands!

Also, "innocent until proven guilty" is the standard for a criminal conviction, not for me personally deciding whether you're a power-mad asshole. It's funny when the right starts yelling about due process and the like, because it only shows that they know nothing about it.

Officer Garcia is a disgrace to the NYPD and needs to be removed from all duty immediately and should have his pension garnished of the 182K the city has paid out on complaints about his actions he's unbecoming of what a NYPD officer should and more often than not is,a protector argue that point all ya want to but we got some of the best cops in the country Garcia was never a cop just another schoolyard bully with a gun and a badge. They really need to step up screening and training at the academy

Anonymous 5:07 - well said. I have said for years that lawsuits based on direct actions of a thug like this should come out of THEIR pockets not the city's. People, almost always, only modify behavior based on consequences. He does need to be removed and barred from this work period, everywhere. People of his character are often sought out for their personality disorders to be the attack dogs of the force. Pathetic. They protect and serve money not the general public.

Punk on punk street hassle, or I fought the law and the law won.

Anonymous " state mandate law of wearing a mask." A mandate is not a law. It is rule by decree.

This is so disgusting, and yet completely expected. The NYPD still acts like they're slave catchers. Of course, the treatment is completely unequal. White kids drinking together and smoking pot are just having fun, while black kids walking home or breathing while black are potential gang members. SO sick of this! Get your act together and let go of the confederacy NYPD!