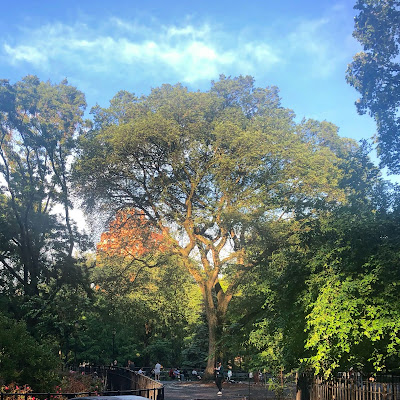 • Cops in riot gear shut down Washington Square Park and Union Square last night at 10 to enforce new weekend curfew rules (@vanishingny ... Gothamist)
• Paralyzed East Village resident sues the NYPD after 2020 deli shooting (Daily News ... previously on EVG)
• Kjun — a well-reviewed Korean-Cajun takeout and delivery operation — is moving in with Hi-Collar on Ninth Street (Eater)
• Metrograph launches new TV app, announces September return to in-person screenings (Deadline)
• Rivera vs. Hussein in District 2 Council race (City Limits)
• Kate Goldwater, owner of the Seventh Street thrift boutique AuH20, details how she was able to maintain her business during the pandemic (CNBC ... previously on EVG)
• The future of Governors Island (Gothamist)
• An ode to Porchetta, the former specialty sandwich shop on Seventh Street (Salon)
• When hippies took over Tompkins Square Park in June 1967 (Off the Grid)
• A look back at East Village Other, which chronicled the counterculture movement (JSTOR Daily)
• Because several people sent me this link: Former One Direction member Zayn Malik involved in a dispute outside Amsterdam Billiards Club on Fourth Avenue and 11th Street (TMZ)
Photo last night from Tompkins Square Park
Posted by Grieve at 10:30 AM

The Wash Sq. situation is very complicated. It seems to be described by the Jeremiah Moss types as some sort of 'state violence' against New Yorkers, but more than anything these nights have been NYU frat boys getting drunk, jumping on top of cars, and throwing bottles at passing ambulances, etc. They're brats who win very little of my sympathy.

Then you've got the addicts in the heroin corner, who do have my sympathy, and are obviously symptomatic of a far greater social and structural failure. But after the shooting three weeks ago on the Waverly corner that left a man in serious condition, the cops stopped looking the other way. I can sort of see why they stepped in, even though the method (closing the corner) was foolish.

The parks people felt the place was trashed in the morning, and their workers had trouble cleaning up all the broken glass, pipes, etc. They have my sympathy. Then you've got the NIMBYs who just hate every skateboarder in a sixty-foot radius, and panic at the scent of marijuana. They don't have my sympathy.

There are some good actors, bad actors, and a lot of lackluster solutions here. I'm not entirely opposed to the earlier shutdown if it means keeping the frat boys in check. I don't know why Moss et al. want to pretend that those kids are part of some 'old New York,' because they simply aren't. Beatniks they ain't; finance bros in training they are. On the other hand, we all lose when the park is closed, and the police solution has been (shock of shocks) far too heavy-handed. I view the entire thing with disappointment but I do think the Twitter types could stand to be a little more sober about what's going on, and not make this out to be a cut-and-dry issue.

Let me boil this down to something very, very simple: IF people behaved like sane, civilized people, none of this shit would be going on.

Young people seem to think NYC exists to be their own private amusement park, a place where the very real damage they do to other people's property AND to public property (like the parks) is of no concern to them. But all of that is a quite serious concern to those of us who have respect for ourselves and for others around us.

I feel particularly sorry for the Parks employees, having to clean up after the stupid fratty jerks. The fratty ones think everyone else is a servant of theirs, which explains why they leave the parks looking the way they left their dorm bathrooms looking.

7:09 PM, I think that's a fair analysis of the problems, but, let's face it, the cops are just looking for vengeance for last year. Having them sweep the parks in riot gear is not a solution, especially not to cater to the wealthy whiners of the lower Fifth Ave. co-ops.

I’m sure that tomorrow EV Grieve will have a story on what just happened in Washington Square Park, but there was a near riot there tonight as dozens of kids fought with the police who were enforcing the curfew. What these people don’t seem to understand is that too many people are ruining the park, and this is what happens when you stop acting civilized.

The issue isn’t so much the physical damage these kids might be doing to public property, although they could leave behind less trash. The issue is what they are doing to the public space in general. These aren’t hippies or Wall St. Bros, they are kids from Jersey, Long Island, Brooklyn and the Bronx hanging out in WSP and appropriating space in ways that make the space unusable, unlivable, and as unpleasant and dirty as it has ever been. I have been going to this park and playing in the fountain since I was one years old, and still go there almost every day of the year, and it has never been as bad as it is right now.

Between the too loud music blaring from countless portable speakers, to the constant haze of vaping, cigarette and weed smoke, to every square inch of the park being appropriated for someone’s clothing boutique, dance party, Venmo band concert. skateboard competition, Santeria candle memorial. weed party, breakdance for money exhibition, outdoor art gallery, crack den, Free Hug money hustle. social experiment, or wheelie exhibition, its as if this is suddenly the Times Square of downtown, only Times Square is cleaner and more orderly than this. Even tourists don't behave this badly.

Many here including myself have complained in the past abut how the WSP Conservancy has been appropriating this space for years, but at least much of what they have tried to do has improved the space, while everything that is going on now is turning it into Bombay on the Hudson. If you have never been to Delhi or Mumbai, believe me, you do not want NYC to turn into anything like that, where many outdoor spaces ensemble a war zone.

The park is so trashed, both physically and in terms of the overall atmosphere, that most of the time it is not worth lingering in for more than a few minutes. Both 7:09 and 10:39PM make good points, the issue is not that simple: these aren’t the hippies who used to hang out there. This crowd takes a commuter train in from another borough, county or state just to hang out and act out. make noise and disrespect everyone else’s personal space.

"...is turning it into Bombay on the Hudson. If you have never been to Delhi or Mumbai"

Whew. Couldn't get through a few paragraphs on a matter of genuine concern without busting out the racism, huh.

The bridge and tunnel crowd that pack the city on a normal Fri or Sat evening include kids coming from the Hudson River Valley especially from the lower regions specifically Westchester.

Brazen Fox which used to be on 13th and 3rd with its loud music could be symbolic of these crowds. It's main storefront is in the City of White Plains in Westchester.

Giovanni has it right. Not some idealized "socially conscious" version of reality, but sober and 100% accurate. Fine line between free-spirited, and making the park unusable for older folks, children, families etc (also friends visiting from uptown who are scared by it 😂). Reality check folks - some level of authority and enforcement is needed in a massive and complicated, shared city.

@Sarah I have actually lived in India, a place I love, and the people are amazing, but it is one of the most impoverished places on earth, and yes, many of their public spaces resemble a war zone, which is what is happening to Washington Square Park. The issue is about how public spaces are treated and how we protect them from abuse, no matter who is doing the damage.