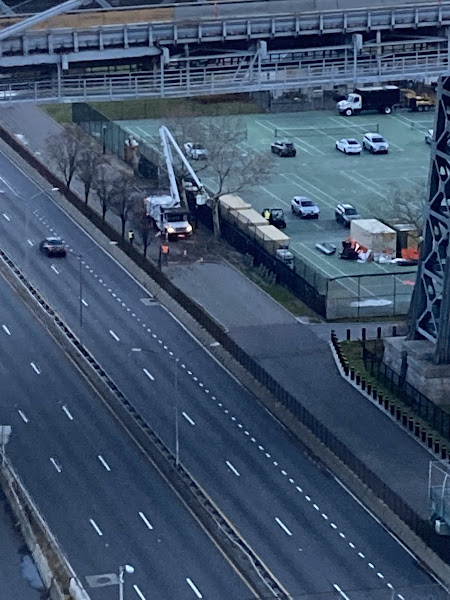 Work continues around the clock this weekend as the city cuts down more trees in the southern portion of East River Park — despite the Temporary Restraining Order (TRO) in place to halt the $1.45 billion East Side Coastal Resiliency project.
The @1000people1000trees account posted a video clip of trees being cut down at 3 a.m.

Activists, who have been protesting as the work proceeds south of Stanton Street to Montgomery Street, say that the city is moving quickly to demolish as much as they can before tomorrow when the Court of Appeals is expected to act on the contempt citation East River Park Action attorneys sent to Albany.
As of this morning, witnesses say that the work has reached the amphitheater. Activists from East River Park Action and @1000people1000trees are calling a meeting at 2 this afternoon at the amphitheater.

🚩Important Change🚩🚩🚩🚩🚩🚩🚩🚩🚩🚩🚩🚩Destruction of Amphitheater is imminent. Instead of meeting at Houston St at 2pm we are meeting at Amphitheater. Access at Corlears Hook Overpass. @1000treesNYC pic.twitter.com/PY2AhJ2rzX 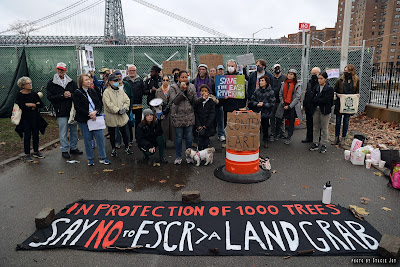 During a rally/press conference, Assemblywoman Yuh-Line Niou, who represents the Lower East Side, called on Mayor Bill de Blasio to immediately stop the tree-cutting.
"I'm appalled that the mayor and his team would toss aside a temporary restraining order granted by the Court of Appeals, but this is sadly emblematic of elected officials who view themselves as above the law and above accountability," Niou said at the rally, as quoted by the Post.
During the press conference, attendees could view the ongoing tree cutting... 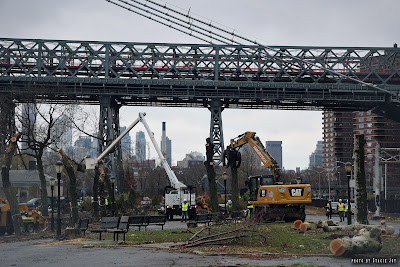 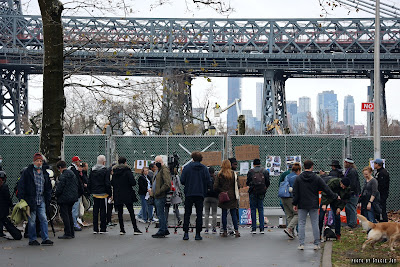 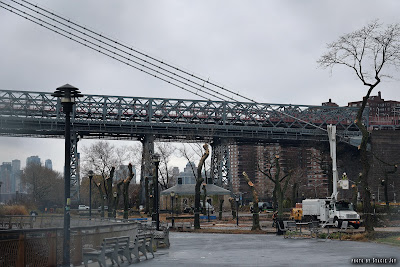 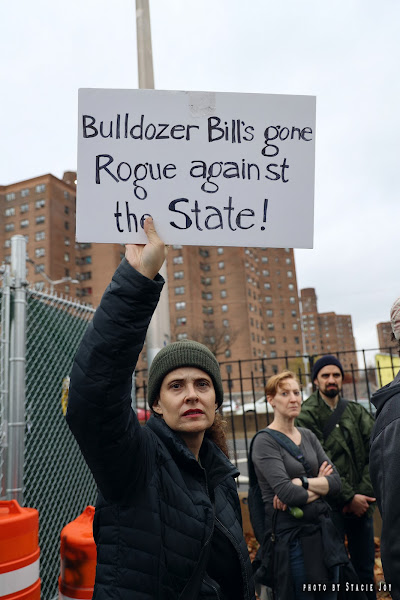 "It's fairly unusual that orders of the court are disobeyed," said Arthur Schwartz, one of the pro-bono attorneys working on behalf of the activists. As The Village Sun quoted: "Bill de Blasio wants to just get this done and in the ground before Eric Adams is mayor. He wants to make sure Eric Adams doesn't have any way to deal with it." 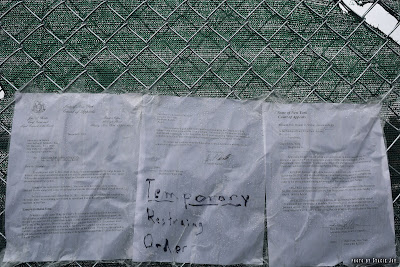 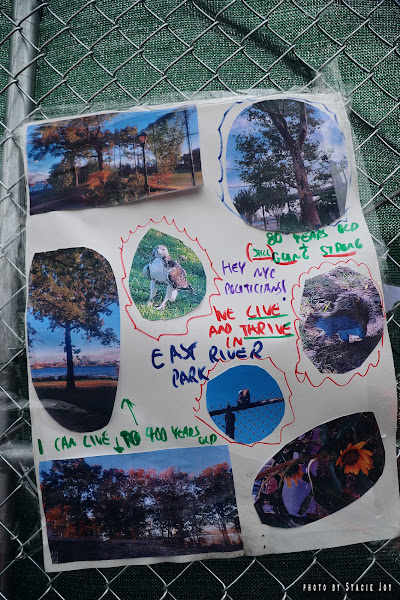 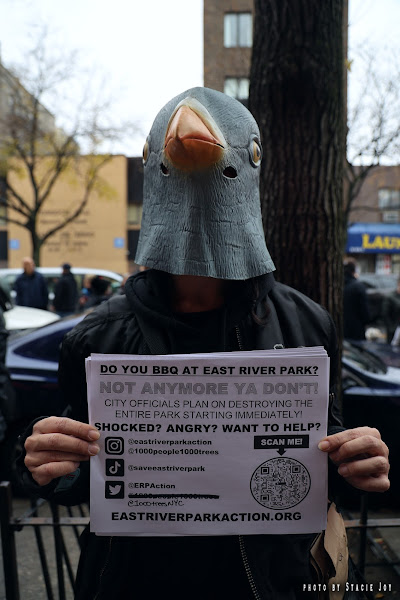 On Wednesday, Court of Appeals Judge Rowan Wilson issued the TRO. According to East River Park Action, who has been opposed to the city's current plan for the park, the TRO remains in effect at least until the next hearing on Dec. 20.
The city's interpretation of the TRO is different.
Per NY1: "The city has reviewed the Court's written order and we do not believe it prevents us from continuing work on this vital resiliency project," said Ian Michaels, the head of public information for the Department of Design and Construction, which is overseeing the project.
As former judge Kathryn Freed, another attorney for East River Park, told the Sun: "The city is just being willfully obtuse. … They're betting that if they cut down half of the trees, we'll just go away. It's pretty evil. And what they've done to this community, it's pretty evil."
City Comptroller Scott Stringer is also questioning the city's actions right now.

I sent the East River Park contract back due to serious unresolved issues, yet the City moved ahead. I'm still concerned that the community isn't being heard, and actions like today's don't help.
⁰https://t.co/b7Jwn3Nsi9

Welcome to the new cop protected construction world. De Blasio is ushering in an age where politicians are fully compliant to the wants of construction and real estate companies. Ignoring the laws around us and the communities that elected them. Instead subservient to the corpos who paid for the campaign, without a second thought. Let this be a hard lesson in getting out to vote. Eric Adams will take these moves and every developer give away will be protected by the NYPD as a base action against the people ruining his gain of wealth from his political career.

Keep being afraid of your neighbors who don’t identify as party line democrats and you’ll keep seeing this city scrubbed into its concrete tourist strolling distopia for short term profit, only to fall back on the people for more tax dollars when their plans bloat because those industries want more. When another disaster strikes, the tourists will leave and the people will pay to keep this place alive, and the politicians will take that money and funnel it to the developers of which they kiss the feet.

Everyone and every media outlet and NIMBY decried who didn’t see the big deal in closing down 60%+ of the park for five plus years is seeing the reasons now. As you no longer have anywhere safe to maintain your health, escape to nature, or even visit the eastern coast line. People will be pushed into the streets to collide with De Blasio’s other failures such as Vision Zero. I’m which they’ll tell you, “you should have watched out for the speeding car.”

If our councilperson or her cohorts have the temerity to show their shameful faces at the tree lighting this year someone needs to tell them right to their faces how shameful they are imo. Best, jg

I mean, why not ignore what the court says about the plan when you've already been ignoring what your constituents say about it? In for a penny, amiright?

Seriously though, "pretty evil" is an understatement. This is absolutely despicable behavior by politicians whose only concern seems to be leveling up to council speaker (Rivera) or governor (De Blasio) while claiming they only had the best interests of the neighborhood or city at heart.

Yes, Mayor De Blasio will use this as his campaign slogan when he announces his run for Governor "Hey voters I had 1000 trees cut down in NYC so imagine how many I will cut down in the rest of NY state if I become Governor so vote for me" It would be comical if it were not so tragic.

But the up side to this is that if they keep this pace, they'll finish the work in half the time --2 and a half years.

Nah. They're probably doing this out of spite. And once the TRO is resolved, they'll take their god awful time, and we wont see a park until 2030.

This news of all night destruction, political arrogance, disregard for the community, along with the photos of branchless trees which once shaded my summer runs, are making me physically ill.

Someone should point out to the politicians and developers how long it takes to grow an 90-year-old tree, because they can't seem to do the math.

At 12:59 PM, Jose Garcia said: If our councilperson or her cohorts have the temerity to show their shameful faces at the tree lighting this year someone needs to tell them right to their faces how shameful they are imo. Best, jg

Not a very good start to the project. What other laws and regulations are going to be ignored at the DDC's convenience throughout the entire construction process? Watch your air quality.