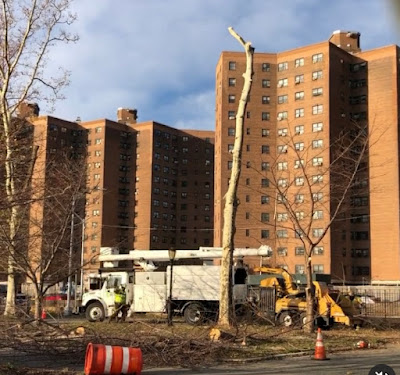 Today, Court of Appeals Judge Rowan Wilson has issued a new Temporary Restraining Order (TRO), halting construction underway in East River Park as part of the $1.45 billion East Side Coastal Resiliency project.
According to East River Park Action, who has been opposed to the city's current plan for the park, the TRO remains in effect at least until the next hearing on Dec. 20.
Arthur Schwartz, an attorney for the activists, told the Post: "We will be asking for all fences to come down and for the bike path and park south of Houston Street to be reopened [as soon as possible.]" (NY1 has more here.)
This is the second TRO advocates have been granted since the start of the demolition work on Nov. 1. (Last week, the Appellate Division lifted the TRO that had been in place starting on Nov. 2.)
As previously reported, the community lawsuit is challenging the project because it still needs an "alienation" vote by the state Legislature.
On Monday, workers fenced off East River Park south of Stanton Street. An estimated 13 trees were removed yesterday, witnesses said.
East River Park Action and other activists have said some alternatives could preserve much of the park and protect the Lower East Side and surrounding neighborhoods from a 100-year-flood event and sea-level rise — one that doesn't cause 1,000 mature trees to be chopped down.
In late 2018, the city surprised community stakeholders by announcing a complete overhaul of a plan discussed over four years of local meetings. As Gothamist reported: "City officials cited fears about maintaining a floodable green space, as well the disruption to motorists on the F.D.R. Drive and potential dangers to Con Ed's power lines under the previous proposal."
The current plans call for gutting East River Park — burying the existing 57.5-acre park under fill and elevating it by 8-to-10 feet above sea level.
Meanwhile, still pending: A nonprofit sued the city for allegedly not including enough minority- and women-owned businesses in the construction contract for the ESCR.
A third lawsuit (dating to the spring) was brought against the city by The Tully Group, a large contractor that issued one of the two bids for the ESCR.
Photo yesterday by Allie Ryan
Posted by Grieve at 12:30 PM

Maybe Hochul can big foot this. She does have an election coming up. Get it postponed until Adams audits the entire deBlasio administration.

I hope this will become permanent; they have already done enough damage. Someone should fine de Blasio PERSONALLY for the damage done by HIS orders.

While im not happy with the current plan delays only extend the timeline and waste money.

What good does this do now? They have already shut off my usual access route to the park over the pedestrian walkway bridge on Delancey Street over the FDR drive. The construction company has already started its destructive work on the park and now because of this legal action there are going to be more delays denying our access to the park which will drag this horrible project on even longer.