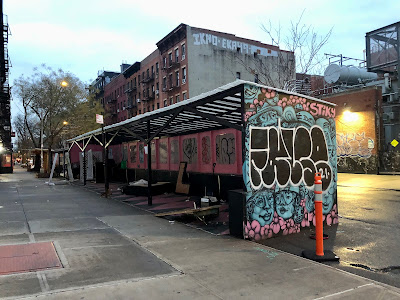 Reps for the Department of Homeless Services have posted notices on that abandoned curbside dining structure on the NE corner of Sixth Street at Avenue A.
Per the notices, city crews will clean up this space beginning today... 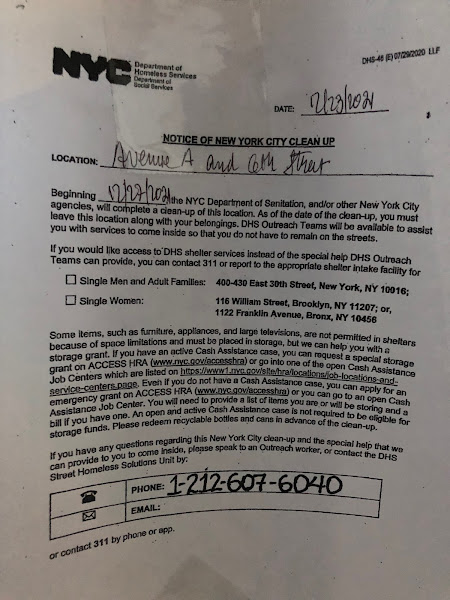 As previously mentioned, several readers-residents have complained about the lengthy structure on the Sixth Street side. The bar-restaurant August Laura closed in the corner space here in early December. Up to 10 people were said to move into the structure the night workers cleared out the restaurant. Another reader said that it has become "a 24-hour shooting gallery."
August Laura's small structure on Avenue A has been boarded up to prevent people from entering... 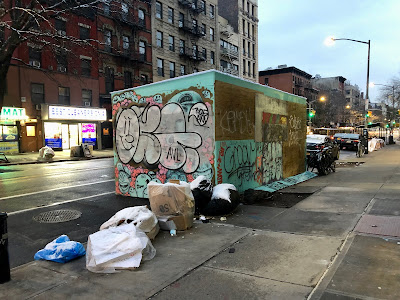 While the retail space is for lease, 94-96 Avenue A is also set for auction on Jan. 31 with an opening bid of $4.8 million. Penn South Capital paid $9.6 million for the property in March 2019. The building's new owners added a one-floor extension here in 2020.
Given that the building is for sale, it's likely that there won't be a retail tenant in the space for some time.
In October, Mayor de Blasio ordered the Department of Transportation to remove unused dining structures erected as part of the Open Restaurants program. City workers have reportedly taken down dozens to date, including the curbside dining structure outside the shuttered Auriga Cafe at 198 Avenue A at the time.
The Department of Transportation (DOT) is working to make the Open Restaurants program permanent. Gothamist has a recap of some of the issues here. A previously undisclosed survey shows support for the program, per Streetsblog.
The Department of City Planning and DOT launched a public survey to improve the designs and rules regarding permanent outdoor dining setups. You have until the end of the year to share your thoughts on the program with the city. Find the survey at this link.
Updated 6 p.m.
It appears that city did clean out the Sixth Street structure ... photo this evening by Steven... 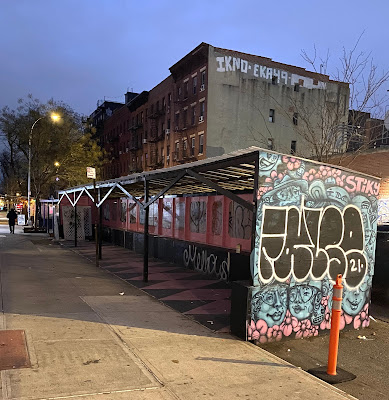 Previously on EVG:
• Reports from CB3's public review of the Open Restaurants program
Posted by Grieve at 5:48 AM

Good that the city is paying some attention.

Clean it up? How about dismantle it, wtf.

So many of these "streateries" are providing a place for the homeless at night. It's a good place to start for the agencies who are trying to help them.

On Sunday, December 26, 2021, it was noticed that people were shooting up at the curbside dining structure during the day!

Just tear these unused sheds down, ffs. It's like the city has lost any shred of common sense it ever had.

But please note: PRIVATE businesses erect the sheds, but PUBLIC MONEY in the form of Sanitation workers, etc. is then required to deal with the fall-out from having these sheds taking up space in our streets.
The taxpayers are always the saps.

It’s all about community communication. Businesses and tenets alike share a responsibility to communicate with each other AND city offices to maintain an agreeable outcome. Businesses are also people, from ownership to employees, whom pay taxes and rent on the same street. Residents and Business owners need to come together. We can not be so polarized in every issue that arises.

The homeless are people too, their aggravations have hit them harder than some. A mere inconvenience in comparison to business and apartment dwelling complainers. Using the energy behind the frustration in a helpful manner is a start. “Be the change”

The fact that the city allows these unsightly structures that accumulate garbage, promote rodents and add additional street noise, as well as take up valuable street space/car parking, to remain permanent while ignoring the businesses responsibility to maintain them or pay rental fees/taxes, is a testament to the complete failure of the administration departing, with no anticipated solution from the one entering. These structures make NYC look and feel like a dump. No wonder residents are leaving and tourism, which affects local businesses, has drastically declined.