Can you spot the one-floor addition atop 94-96 Avenue A? 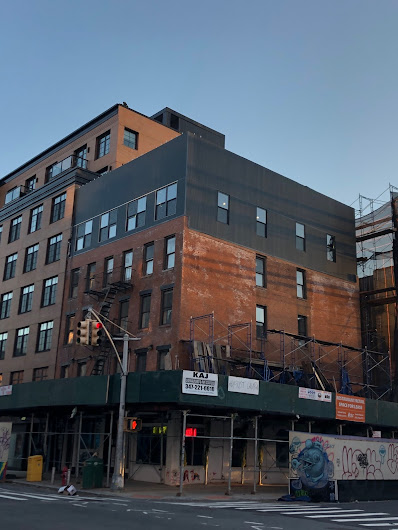 Late last week, the construction netting on the south-facing wall at 94-96 Avenue A came down, revealing even more of the one-floor extension on the building here on the northeast corner of Sixth Street.
Several readers have commented just how poorly the new floor fits in with the old building... 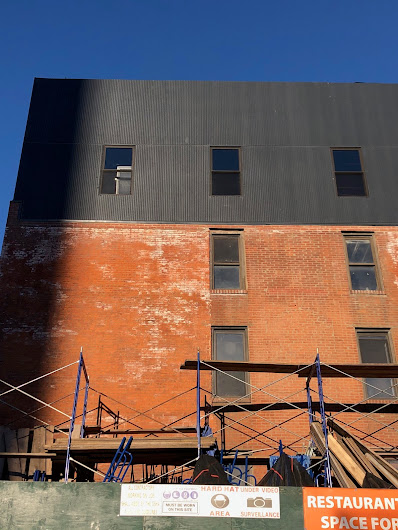 According to the approved permit, the work includes an interior renovation of the fourth-floor apartments and an addition of a fifth floor. The building's square footage increased from 8,304 to 10,151. Despite the expansion, the taller No. 94-96 will have 10 residential units instead of the current 11. The filing also shows that there are plans for a roof deck.Penn South Capital paid $9.6 million for the property in March 2019, per public records. Pini Milstein was the principal owner of the building as well as the operator of the Sidewalk, which closed in February 2019 in the retail space after 32-plus years. The bar-restaurant August Laura has been the tenant since October 2019. Previously on EV Grieve:• 1-floor expansion planned for Avenue A building that housed the Sidewalk• The building housing the former Sidewalk sells on Avenue A
Posted by Grieve at 4:50 AM

Looks like a used loppy ship container.
Must have cost millions !

The first nominee for "worst addition to an existing building" category for 2021. It will be hard to beat.

What about the fact that it’s actually two stories?

They probably plan to feature helicopter parking on the roof.

I think this building says a lot about the absurdity of the current zoning––in the Upper East Side, this building would simply be knocked down for a sizeable high-rise, and you could get 40 or 50 homes for the location. The stricter zoning here instead incentivizes combining existing units rather than adding new ones, which is emblematic of why rents in the East Village become more like the West Village every year. It's really too bad.

At the very least, I hope they give the pop-up portion a fresh coat of paint.

It’s one story with a parapet around a flat roof. It’s ugly as hell.