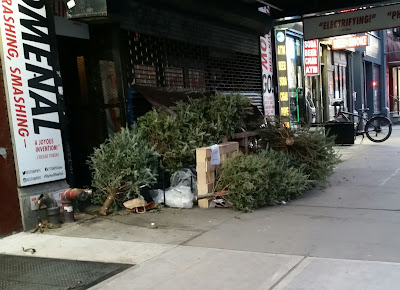 This makeshift shelter outside the Orpheum Theatre on Second Avenue between Seventh Street and St. Mark's Place has been served a "notice of removal."
Said EVG reader 2ndAvenueSilverPanther, who shared this photo: "Created with cardboard, wood and discarded Christmas trees, it's an obvious hazard on a block that has seen more than it's share of misery."
Since the photo was taken, someone removed the trees, though the shelter remains in place.
A man who had been staying here was found deceased in early November. A friend said that the man had been sick, though he had refused to seek medical treatment.
Updated:
This photo by Eden shows that the deadline for removal is Thursday... 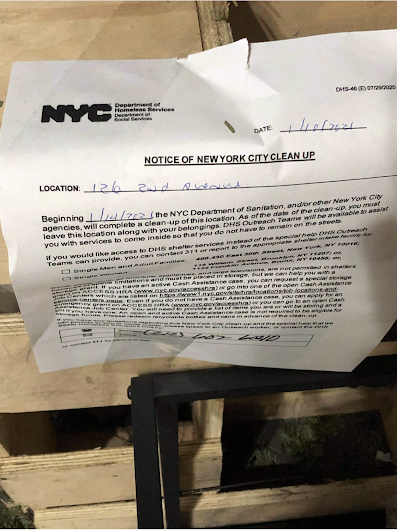 Yeah, continue to argue that this strip is not the worst.

The guy in the middle of Houston near Suffolk doesn't bother anyone but boy does he have a collection.

Far worse "strips" around then a few kids drinking at Stomp and sleeping where it is safe to sleep..by St Marks.

Well, can you really blame whoever(s) was in that
cozy forest-y spot ?
Secluded somewhat, some natural privacy, smells nice,
blocks some wind, a cozy little outdoor spot.
Think it's great whoever was so resourceful.
I truly hope never to be in such a position.

Of course, for the rest of us lucky enough to be able to
have and pay for an apt, it looks unseemly.

The guy who lives at the median on Houston has amassed a lot of belongings. He is one of the nicest people and never bothers anyone. During the pandemic I have brought him "supplies" and I know he is would be very appreciative to anyone who is willing to donate necessitates such as soap, deodorant, teeth cleaning, water etc.

Interestingly, I noticed a few more of these signs on a walk this morning, all of which are happening today/tomorrow. Seems like there may be an organized movement to clean up some of the messier encampments.

Maybe it's not the worst in terms of size, but it's facing the site of the gas explosion from years ago, and the destroyed corner with Middle Collegiate Church, and again: a man was found dead in this pile. The businesses around here certainly don't need anything else hampering their foot traffic.

Does anyone know the status/disposition towards the encampment under the FDR at 18th St?

@ 6:03 am, amen. when i was younger i found myself with no place to sleep for several short periods. this tree fortress would have been a dream. let's aim for solving the larger problem of homelessness. i can assure you that what seems like a nuisance or even a threat from the outside can feel very different from the inside, and many are just a paycheck away from finding themselves in such a situation.

Those trees would become, if not already, tinderboxes waiting to explode. All it would take is for one careless clod to toss a cigarette on the pile and Whoosh ... up in flames. If you can't see that and think it's a dream, you're sadly mistaken.

@12:52 pm Thanks for stating what I thought was clear to all when I took this photo. I've seen the guy who made this "shelter" smoking there. I also was told by authorities that I was the first 911 caller in March of 2015 when the building across the street exploded. Last month, I was awakened at 5:00 am by the sound of fire trucks descending on the block, yet again. I've seen enough flame and traumatic destruction on my block. This guy, who is the same gent who has been "singing" incessantly at the top of his lungs at all hours on the block, does not have a "right" to endanger others, in spite of his circumstance.