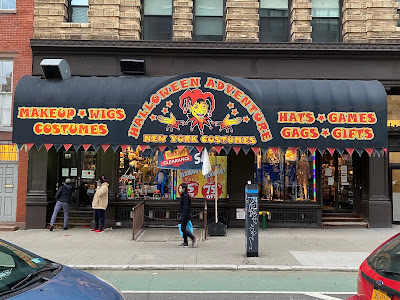 As you may have heard, Halloween Adventure is shutting down in the weeks ahead at 808 Broadway/104 Fourth Ave. between 11th Street and 12th Street.
The costume shop has been holding big sales since early December, arousing suspicions of a closure, though nothing had been made official ... Time Out was able to get confirmation from an employee last week... 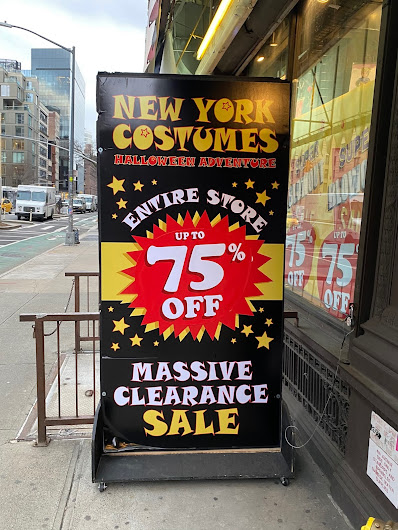 According to SecretNYC, the store will shut down at the end of February. A worker blamed the closure on a lack of business in recent months during the pandemic. 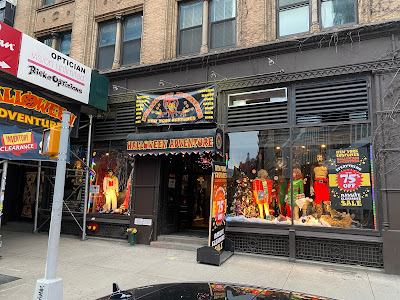 The company has been around since 1981 with outposts and pop-up shops in Pennsylvania and New Jersey. Here's some of the store's EV history via Time Out:

[Halloween Adventure] first opened a temporary pop-up store in 1991 and continued to open pop-ups in the East Village until 1996, including at spaces that now house Forbidden Planet on East 13th and Broadway and the Fed/Ex Kinkos on Astor Place.

Thanks to Steven for the photos!
Posted by Grieve at 5:20 AM

Terrible news.
They always had a fun window.

I will miss the chained red-eyed demon that used to guard the front door. One more loss to the interesting mix of stores in NYC.

I visited this store for the first time after living in the city for 7 years.

I was absolutely shocked by the sheer size of this store - literally two levels spanning 4th Ave to Broadway. The whole time I was there, I was questioning how a place could be this size and make any money...covid era or not.

I suspect that Amazon and Etsy contributed.

There goes my shortcut

What about Gothic Ren? Are they also closing?

They sell empathy sunglasses - get some next time you pass through. They will definitely improve your view of others 👍

I guess I'm the only one who won't miss this place; once, I went in to browse and before leaving took one of the many paper flyers that were on the counter by the door.

One of the workers apparently saw this out of the corner of his eye and as I left, took off after me. I had to empty my pockets and bag on the street to show him I had nothing that had been in his store.

I'm not fond of a shopping experience like that; I realize he was only covering his ass, but I'll gladly stay away from any store that treats their customers like dirt.

I have been a huge fan of the store for a long time. They have started to sell gift cards for the store in an effort to at least keep the store open until Halloween. (https://www.halloweenadventure.com/) They're open every day of the week now with expanded hours (Mon-Sat 11AM to7PM; Sun Noon-6PM). I'm really hoping they can turn this around and I have been pushing on Instagram to bring attention to them and hopefully help them out.