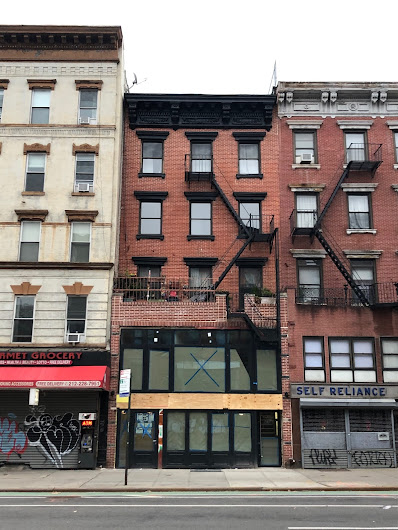 Workers recently removed the sidewalk bridge and scaffolding from 100 Second Ave. between Fifth Street and Sixth Street.
The retail space was the longtime home of the Haveli Banjara Indian Restaurant, which quietly closed in October 2019.
Approved work permits with the city lists the following work happening at the address: "Convert first floor eating and drinking establishment into a residential apartment."
However, it appears that the ground floor will remain a retail space and the upper level, which Haveli used for seating, has been converted to a residence.
As previously reported, public records show that the building changed hands in March 2020 for $6.1 million ... with the Highpoint Property Group listed as the new owner. The Group's other East Village properties include The Slater at 174-176 First Ave. and The Topanga at 202 Avenue A. And in keeping with the the theme, No. 100 goes by The Callahan.

One EVG source said that the previous landlord died. The building had been on the market since September 2017, with an original asking price of $8.6 million.

In November 2017, the restaurant's staff told patrons that they would be closing in early 2018, with the hopes of finding another location nearby.

Haveli was the oldest surviving Indian restaurant in the East Village, opening in 1987. Banjara moved in here in November 2013.

Previously on EV Grieve:
Haveli Banjara Indian Restaurant said to be closing and relocating early next year
Posted by Grieve at 5:00 AM

The retail space is probably revered to as the ground floor in the documents, the first floor being the upper level.

I've always been envious of who ever lives on the third floor and has that nice little terrace with flowers. In summer, it looks like a lovely spot to hang out.

Looks like a nice job inside and out - a welcome change to all these renovations in the neighborhood. A welcome addition to the Avenue I say!

I miss Haveli/Banjara! Please re-open when you can!~

Kahn - the manager - was always super kind and caring. He treated us like family. We really miss that place and the vibe it brought. It was like going to our friend's house for dinner.