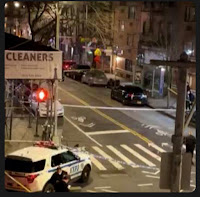 Police are investigating a fatal shooting last night on the southeast corner of Avenue C and Third Street.
According to published reports, a 36-year-old man was shot multiple times around 8:40 p.m.
The Post reported that three men were seen fleeing westbound on Third Street. Witnesses also said that the victim had been on a bike.
Residents have long complained about the drug activity on this corner, which has been under a sidewalk bridge now for more than eight years.
The renovations to the three-story building, 32 Avenue C, came to a halt in recent years. A full vacate and stop-work order remain at the address.
Posted by Grieve at 5:20 AM

It is sad what our city has come to. Our elected officials have to take a stand and address quality of life issues which have dramatically deteriorated over the years. People who can are leaving the city, and the less fortunate people are stuck having to deal with issues such as this.

I live close by. Heard the shots myself last night. Pap-per-pap-pap-pap. Sirens arrived within minutes. Very sorry to hear this was fatal. Yes, something has to be done about this corner. Both this building and the NYCA building opposite have had scaffolding there for years with absolutely no construction activity. The two corners have subsequently become a big area for dealers and the homeless.

Excellent Job by this Mayor to bring back the '70's to the city.

There is a long history of drug sales on this corner. I used to live on E.3rd between A and B for many years. In the early 90s I photographed a shootout between undercovers and dealers in a storefront there that left a dealer dead and a cop wounded. The story made the cover of the NY Daily News. I guess things have gone back to the way they were then.

Word is ot was local drug dealer. 6 shots and DOA.
We all know this corner is a mess and avoid it. Maybe someone will start to pay attention

Gun violence and social dysfunction have been a staple throughout America for quite sometime. NYC is no exception. People are fleeing for the suburbs, small towns and cities need to validate their reasons and stick by them. One person made an issue that suburbia doesn't offer good pizza or good sushi like what you find in the city.

What kind of drugs are being sold on the street these days so that people being shot over them? Coke? heroin? pills? I see the bums fighting over booze so I have no idea what people over what are murdering each other. Anyway I predict a new recreational drug within the year.

When I worked at The Living Theatre on East 3rd and Avenue B, I felt I took my life in my hands walking to and from. I could talk about a million incidents that happened--my brother being told at a street corner that if he wasn't buying, he better leave or he'd be dead, just general creepiness and terror. I lived in Haight Ashbury in the late 60s AFTER the summer of love, when in my naivete, I once smiled at a Hells Angel and he threatened to shoot me. I hadn't felt anything like that again until I was hanging in the East Village in the late 70s. And that was after it was presumably "better." I always feel mixed emotions about the War on Drugs perspective because, well, I've been a beneficiary of its lack of control at various times in my life. And I disdain what's come in to replace it--expensive restaurants and fancy people slumming in a ghetto/oasis-in-transition. But sorry that there's been more death on East 3rd Street. Not a good sign as we struggle on amidst corruption, violence and plague.

Agree, the issue isnt stop and frisk or defunding the police.

First and foremost backup in courts and the resulting delay in getting criminals off the streets. Additionally cops are not dealing with 'quality of life' issues, which basically includes drugs. Also closing the shelters and outpatient programs for covid reasons, means people arent getting help/mandated recovery and testing they are supposed to get. With FEMA forgiving 100% of NYC disaster funds, that means its cheaper for the city to put homeless up in hotels with closed doors and not in an established facility with structure. Also getting rid of undercover narcotics around here (which was a HUGE force) means less narcotics arrests and again more open tolerated use. You let drugs flow, you are gonna get violence to go with it.

Beacon, maybe you need to tend to your upstate business and stop being ignorant about the city.

Isn't the issue as simple as cops not actually patrolling? Pretty much ever? When is the last time the NYPD actually had anyone on the beat, be it on foot or in a car.

People scoff when we talk about the raging graffiti, but it's just the most visible evidence of a lack of police presence (and one could argue ability to enforce laws/punishment for such activities) that is only manifesting more and more with things like break ins, robberies, and murders.

Has there ever been a small amount of graffiti on the Lower East Side? Ave C and especially Ave D have beats - I've seen the same squad car circling the dead end block on 5th and C on any given night. That being said - they don't do much and would not get out of the car unless the seat was on fire. Most cops (perhaps most people) have no impetus to do anything extra besides responding to the calls assigned to them. Housing cops say they can't police the projects in the neighborhood because hands are tied and its the mayors fault. That line will be oft repeated by most cops in the city. Clock in, clock out - get a little bit of overtime and go home.

I remember the 70s-80s.
The governor, and NYS assembly+senate have to share the blame for this.

If you know who is Pete Seeger, the well known folk singer and musician then you realize we are all connected in NY State.

Beacon isn't really upstate and it's more connected to the East Village than we would think. Besides a few residents living in Beacon who are former EV residents, the late Pete Seeger epitomizes this example. He used to live in the EV in the 1930s before taking his residence in Beacon only to provide banjo lessons in the EV during the 1950s.

One of the blog authors ought to do a post on Pete Seeger and his roots in the EV before his residence in Beacon.

I know these comments aren't related to the topic. Just want to point out the connections.

Carlina Rivera doesnt tweet about this because she dont care about us. She only cares about her agenda. These leaders only care about rich people like redesigning union sq

NYC is about 2 years away from becoming Detroit.

Some cops may be lazy but to act like they are not handcuffed (no pun intended) in this era dismisses a big part of the problem.

Drug Addicts (the demand)need to be put in Programs to treat their addiction and not able to sign themselves out of treatment. Jail is expensive and accomplishes nothing. Eliminate the demand you will reduce the suppliers.
Drug dealers at street level are nickel and dime players in a trade that has no problem with violence.

The precinct is three 5 blocks away , just goes to show the level of not caring by these criminals as they know nothing g will be done, Debozo the mayor ruined our city , we need undercover cops back , stop protecting the fing criminals , we pay taxes for this shit

It wasn't so dicey when Maria's wonderful little coffee shop was there to make that corner more welcoming. Loved getting coffee and a snack there. The scaffolding and neglect have certainly made it creepy.

They finally started doing work on that corner, yay!

Will somebody report about it?