Have you seen the refurbished Cooper Station Post Office? 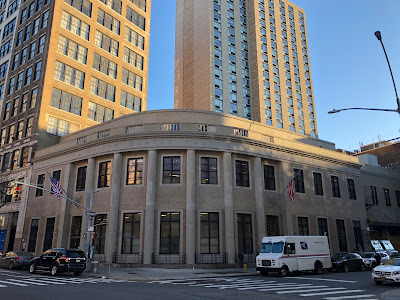 The scaffolding and sidewalk bridge have (finally) been removed from outside the Cooper Station Post Office on Fourth Avenue at 11th Street... marking the end of a years-long exterior renovation... looking good (click on the images for more detail) ... 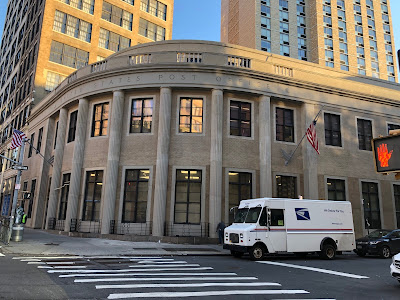 How are people feeling about the inside of the PO and its service? (There were some feelings a few years back.)
And here's some history of the building via the Village Preservation blog:

[T]he building was designed by William Dewey Foster and constructed in 1936-37 as part of the W.P.A. (Works Progress Administration) to combat the Great Depression. Foster was responsible for designing structures in both New York City and Washington D.C., including ten post offices in New York City and its immediate suburbs.

Cooper Station was designed in the Classical Revival style and its most dramatic feature is the curve of the facade at the irregular corner of the site. Further highlighting the curve of this building is the two-story colonnade comprised of six receded Doric columns which delineate the corner bays.

The Cooper Station Post Office was listed on the New York State and National Registers of Historic Places in 1982.

Unfortunately, the building is not landmarked.

And other factoid: Newman on "Seinfeld" was said to work at this P.O., and the exterior made a super-quick cameo in "The Package," which originally aired on Oct. 17, 1996...

Beautiful building. Always better service here than the old Stuyvesant PO. Much friendlier people too than at that godforsaken facility. Though, at the new Stuyvesant the workers are cheerful and helpful.

I think Cooper is featured in a number of different Seinfeld episodes. It's the default exterior for any Newman Post office related stuff.

"Though, at the new Stuyvesant the workers are cheerful and helpful."

That is true. But trying to avoid the people with mental/addiction disabilities at the door and who hang just inside by the mail drops is not a fun exercise.

Surprised it wasn’t sold to developers.

It's a showpiece building, beautiful and
lucky in our neighborhood.

Respect for the postal workers at Cooper Station. They're always friendly to me, and I know how hard the pandemic has been for them. Once last spring it felt like the worst of times in there, and not long after, they'd added lights and plastic shields. I was amazed at the turnaround and felt glad that they could at least work in a more inviting space. Keep it up, Cooper Station!

@3:02. In a way it was. The air rights were sold to NYU resulting in the very tall dormitory on the south side of 12th Street between 4th and 3rd. Behind what remains of the facade of the Catholic Orthodox church

Finally! I hope this makes the working conditions of the employees there much better. Some of the employees were definitely a lot friendlier when I had gone yesterday than earlier on in the pandemic.

who are we kidding, it'll be an Apple still within 10 years

I love Cooper. I am there almost every day for ebay stuff and know everyone by name. They have my band stickers up in their workspaces too haha. One worker made an Instagram called at the PO or something and she takes pics of interesting characters and regulars who go there. I showed her that Seinfeld clip in case she wanted to post it.

I seem to remember there being beautiful murals across the tops of the walls back 30 or 40 years ago. Am I imagining this or were they covered over?