The 25th anniversary of 'Rent' 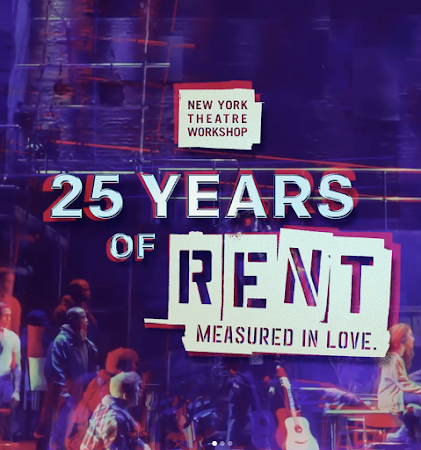 This week marked the 25th anniversary of the very first performance of "Rent" ... the musical, which would later win the Pulitzer Prize and Tony Award, debuted on Jan. 25, 1996, at the New York Theatre Workshop on Fourth Street between Second Avenue and the Bowery.
NPR published a look back at "Rent" this week (find the article here), recounting how the performance almost never happened as creator Jonathan Larson died that morning of an aortic aneurysm.
On March 2, the New York Theatre Workshop is hosting a virtual fundraiser in honor of "Rent"'s anniversary.
Per the invite:

This virtual celebration of "Rent" and its impact on the collective cultural consciousness will feature a selection of iconic songs by some of today's most beloved recording and theatre artists, exclusive content uncovering how "Rent" came to life, and reflections on the driving force of Jonathan's legacy in the American theatre.

Scheduled performers include Idina Menzel, Adam Pascal, Billy Porter, Anthony Rapp and Daphne Rubin-Vega, among many others.
Tix for the fundraiser start at $25. Find more details about "25 Years of Rent: Measured in Love" at this link.
"Rent," which was based on Puccini's "La bohème," later made its Broadway debut on April 29, 1996. You can read more about the musical's East Village connections here.
And this year will mark the 10th anniversary of the closing of Life Cafe, where Jonathan Larson wrote "Rent" while hanging out in the early 1990s, on 10th Street and Avenue B.
Posted by Grieve at 5:00 AM