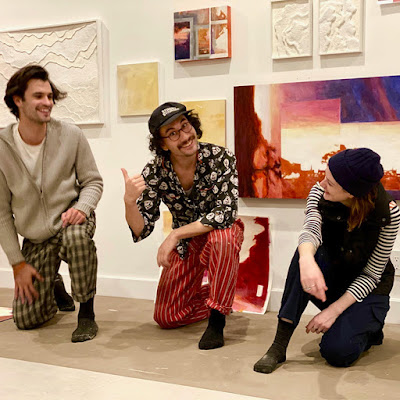 First Draft, Caslon Bevington, Sei Smith and Dylan Reitz
Ki Smith Gallery, 197 E. Fourth St.
After walking past one of the first iterations of First Draft, I was intrigued to know more about Ki Smith Gallery and its seemingly unique approach to the contemporary art space, curatorial programming and general history.
What strikes first about this space is its small fish/big pond boldness — you can see certain works before you walk in and in most cases see all works at once when you are inside. The interior to me is experimental, testing and quite obviously full of potential.
I had the pleasure of being taken around the work of install_1, the first of three parts in First Draft by its curator Sei Smith (pictured in the middle above, and brother of Ki Smith). Speaking to the works of art and about the show as an art form in and of itself, Sei’s confidence and strong sense of adaptability between both artist and curator presented me with a wealth of knowledge and, naturally, a long list of questions.
I didn’t want to leave, but since when has a gallery show been something dying for certainty or resolution? I had accessed more information about how each artist and curator worked with materials, while maintaining my curiosity around why Sei had curated his share of the show the way he had.
What did he want his audience to take away from hanging Bevington’s referentially digital painting next to Reitz’s recycled paper sculpture? Why were pieces hung at jarringly different heights? What time of the day could you watch certain works change in color? What would the show look like next if all of the same work would be in the same room? How does it feel for a viewer to engage with the artworks in such an intimate setting?
“The synchronicity lies not in the aesthetics of the art objects, but in the artists’ treatment of material as subject to create subversive “paintings” that embody the inescapable harmony of minimalism.”  (Read the press release here.)
Harmonizing Ki Smith Gallery until Valentine’s Day, three young artists who were supposed to show at Art Toronto found themselves in conversation about how their practices ebb and flow, fit with and depart from each other’s.
After being hit with a pandemic and needing to exhaust different resources, Caslon, Dylan and Sei dug into finding meaning in solitary art making for the benefit of collaborative showcasing.
This show is fantastic in the sense that all three artists who hold reputable qualifications had the decency to deliberately exclude theoretical and institutionalized guidelines from their curatorial processes. Instead, they have relied on the work itself, their tastes, instincts, and respect for their fellow artists. This show is real and makes the work so much more raw. East Village… can we have more of this please?
The artists and revolving group of curators include Bevington, who works with resin, concrete, acetate and polyurethane. Her work bridges between hypothetical and physical through the use of paint, pixels, words and fabric. My favorite of hers was the acrylic on panel Photograph of Orange Rose, 2020.
Another stand out work for me was Rills, 2020. Made from handmade paper by Reitz who has a background in stock animation film. He is currently studying Integrated Digital Media and has seamlessly married an organic analogue material with a mechanically digital format.
Both his animation and in-real-life works are memorable purely because you’ve probably never seen something recycled both physically and digitally quite like this. Extremely impressive.
And of course, the curator of the first installation of First Draft, Smith studied painting at the School of the Art Institute of Chicago and has shown his work both locally and internationally. I personally felt an instant draw to Sei’s work because of its reflective surfaces, fluorescent, iridescent and transient in their formal finish.
His work in First Draft grapples with the substantiality and appearance of wet paint, dry paint, adhered surfaces and deliberate mistakes in the process of layering various materials. His work changes each time you walk into the space, creating differing sensations for each viewer. Made from acrylic and iridescent film on panel, his best work for me was Half Iridescent_Paint Subjects, 2020.
You can find all work from First Draft and many other works from Caslon Bevington, Sei Smith and Dylan Reitz on the Ki Smith Gallery website.

First Draft will be travelling through two more iterations, curated by Reitz (install No. 2 ending on Sunday) and Bevington (install No. 3 from Feb. 3-14) at Ki Smith Gallery, 197 E. Fourth St. between Avenue A and Avenue B.
And a special thanks to Sei Smith for showing me around the space. 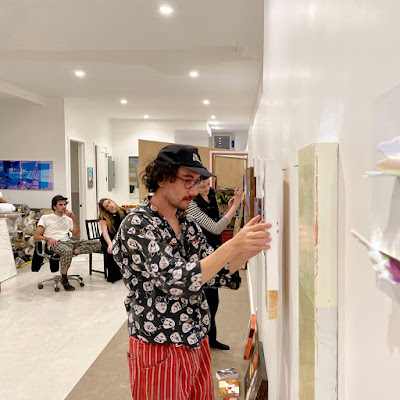 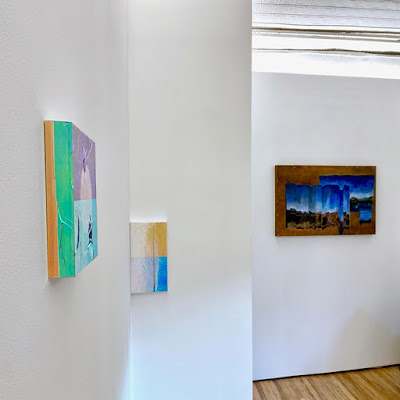 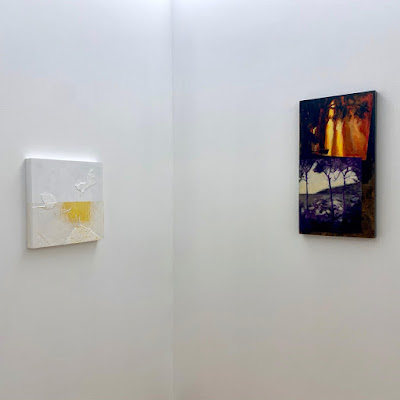 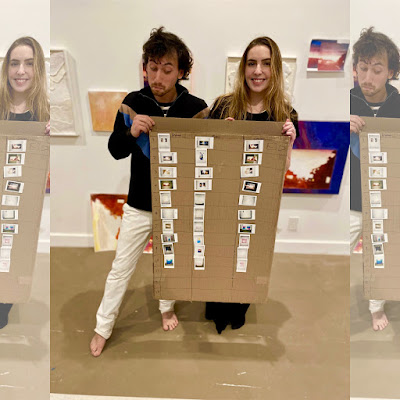 Seeing a lot of Art Gallery promo on this site. Moral for a pandemic.... You cannot eat art unless you are buying or selling it.

We debuted the weekly Gallery Watch column this past Nov. 4. Until then, it wasn’t a topic we covered as much in the previous 13 years.

i appreciate the addition of the art watch! i am also a fan of the ongoing "very old christmas tree" feature!

as a (native) New Yorker and artist....I love the Gallery Watch column!

walked by this install this week & it looks great. can't wait to see the next iterations. i'm not a curmudgeon by nature so i feel badly asking, but i wonder how come these obviously very talented people in these photos aren't wearing masks?

thanks Grieve for Gallery Watch. I am usually unaware which galleries in our lovely neighborhood are showing what and when, so this is really helpful!

I too appreciate the art coverage. (At the risk of reading this too carefully, I'm not sure how the artists had the "decency to deliberately exclude theoretical and institutionalized guidelines from their curatorial processes" while at the same time declaring, "The synchronicity lies not in the aesthetics of the art objects, but in the artists' treatment of material as subject to subversive 'paintings' that embody the inescapable harmony of minimalism." Sounds theoretical to me!)