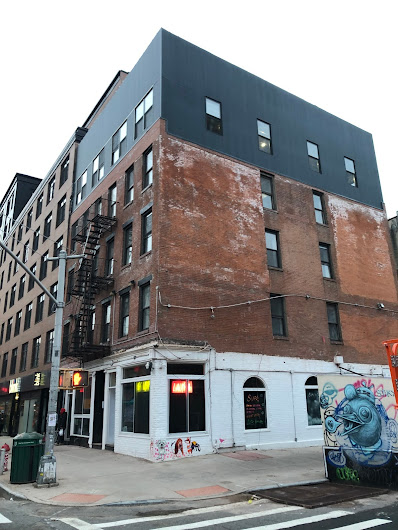 The two-part motorcycle mural on the Sixth Street side of 94-96 Avenue A is no more.
On Wednesday, workers removed the sidewalk bridge from the under-renovation (one new floor!) building... and that's when people started noticing what was missing... this photo is from several years ago... 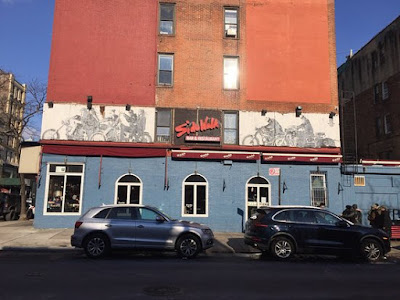 The mural, which the local artist WK created in the mid-1990s when the Sidewalk Cafe was here, survived the restaurant transition in the fall of 2019 to August Laura.
Laura Saniuk-Heinig, one of the proprietors at August Laura, told me at the time that she loved the work and wanted it to remain in place, appreciating its history in the neighborhood.
When asked about the mural yesterday, she replied: "Unfortunately, I do not know anything about the mural. I was shocked once the scaffolding came down [and saw] that the beloved mural was gone too."
Among others, the mural featured Hugh Mackie, the owner of Sixth Street Specials on Sixth Street just east of Avenue C.
WK shot the photos to use for the mural in the abandoned lot next to Sixth Street Specials at different times and pieced them together into the finished product. Mackie created the "floor" of the piece with plywood and used whitewash on the wall of the building as a backdrop.
The mural was also used as branding for Sidewalk, which closed in February 2019 after 34 years in business. 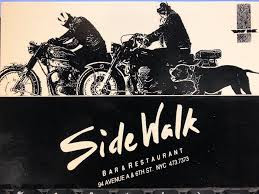 Penn South Capital paid $9.6 million for the property in March 2019, per public records. Pini Milstein, who retired, was the principal owner of the building as well as the operator of the Sidewalk.
In April 2019, when some renovations were starting at 94-96 Avenue A, rumors circulated that the panels were going to come down. This is what WK said at the time to EVG contributor Stacie Joy: "I think this old mural project had a good life and probably the wood behind it it is completely dead — not much can be saved."
And from Mackie, who has lived here since 1981: "The mural became a gateway to the heart of the East Village — much like the Gringo mural of Spacely on St Mark's Place. Sidewalk Cafe was a successful restaurant and a perfect meeting place. Nothing is permanent, not even me!"
Posted by Grieve at 5:10 AM

Wow - is nothing sacred anymore??

Spacely, now that’s a throw back

Well that explanation is believable considering how they actively removed the rest of the cafe character and turned it into a generic looking white walled expensive restaurant. Oh yeah it "disappeared".

Out with the old and in with the new I guess. What can we do? Nothing!