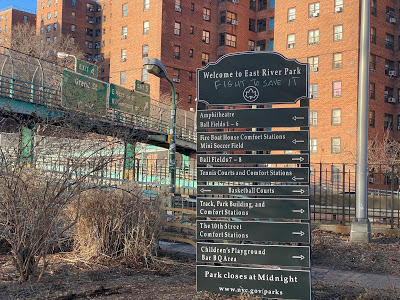 A value engineering study, an oft-cited factor behind the city's change of plans in September 2018 to bury/elevate East River Park by eight feet as part of the East Side Coastal Resiliency Project, does not exist, according to advocacy group East River Park Action.
On Friday, in a reply to the group's Freedom of Information Law (FOIL) request, NYC's Department of Design and Construction (DDC) stated that the city's value engineering report could not be sent because:

"DDC's search of agency records revealed no responsive documents for [the FOIL] request."

This means that the present massive $1.45 billion plan lacks the basic justification for the change that doubled the cost and destruction.
According to a “Fact Sheet” from de Blasio’s office on Sept. 28, 2018, "The adoption of the new design follows a value engineering study performed earlier this year and a review of the project by a panel of experts with experience from around the nation." 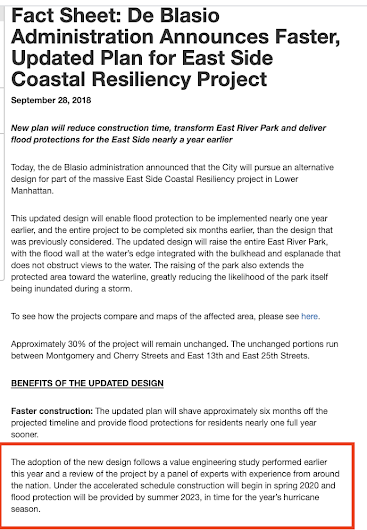 "The 'value engineering report' leads to the conclusion that Alternative 4 can be completed faster and with a greater degree of certainty," he wrote. However, he never saw the document. "This value engineering report is not publicly available," he noted.
This nonexistent value engineering study and invisible review by a panel of experts paved the way for the new plan and scrapped a less destructive plan that had been developed over years of community and city joint planning.

The city's current plan, which has been met with outrage by community members, will raze the 57.5-acre East River Park, bulldozing 1,000 mature trees and rebuilding the park atop eight feet of landfill meant to protect the Lower East Side and surrounding neighborhoods from a 100-year-flood event and sea level rise.
In October 2019, the city announced that they would phase in the construction so only portions of the park are closed to the public at any given time. According to various reports, the city has committed to leaving a minimum of 42 percent of East River Park open to the public. It is projected to be complete in 2025.
The start of construction, which had been slated to commence this past fall, was delayed until this spring, according to a recent presentation the city made.
However, given the revelation about the value engineering study, "we demand the city stop the ESCR plan so it can be further reviewed," Fannie Ip of East River Park Action said in a statement. "This is not the 'Greener, More Equitable' NYC, which the de Blasio administration has repeatedly promised."
You can read East River Park's full statement and ongoing concerns at this link.
Posted by Grieve at 5:30 AM

We need to know Council Member Rivera on this. We always knew the change of plans was all about minimizing disruption to the users of the FDR drive. Tear down the road, have a breath of fresh air and plenty of land mass to absorb future floodings. Paris tore down a highway on the river bank and reclaimed it for people instead of cars. We deserve better. The wealthier west side of Manhattan has no highway: it has a street with traffic lights, crosswalks and 30 MPH speed limit.

So - who got the money for the study ?

Corruption in the DeBlahblahblah administration and the construction industry? I'm shocked - shocked. Now shall we go gamble at Rick's Cafe in Casablanca and get away from it all?

Choresh is right, we need to fill in the FDR

This past year we learned without doubt the importance of being informed, being an active citizen in regards to our local, state and Federal governments and when billion dollar contracts are handed out by our Mayor red flags should be flapping so loud it sounds like thunder. This is at the very least a horrible lack of transparency on behalf of the Mayor office or a purposeful deceit and perhaps an illegal act by his honor.

Gee, that doesn't fit with the political narrative. Let's see if Twitter and Facebook suppress all discussion about this.

Can't see how elevating that stretch the FDR would would cost anything more, and probably cost less

Please stop with this nonsense. We don't want to get flooded out of our homes again. In addition, many of our waterfront parks get rebuilt with federal funds like this. Our district has some of the worst parks in Manhatran. East River Park is in dire need of repair.

The FDR drive will still kill us a little bit more every day regardless of the renovation of the park.

Our neighborhood has some of the worst air quality in the city due to the highway and ConEd. Any plan that minimizes the highway and protects our air (while preventing flooding too!) is welcome. That was the plan before the (non-existent)mystery report appeared. Manhattan should join the rest of the larger cities of the world in discouraging car travel.

It's more likely that the FOIL attorney did a shitty job on the search than that the study doesn't exist--but nothing's impossible!

"Please stop with this nonsense. We don't want to get flooded out of our homes again. In addition, many of our waterfront parks get rebuilt with federal funds like this. Our district has some of the worst parks in Manhatran. East River Park is in dire need of repair."

This is a deflection. This always come up when this issue is discussed. There was a community approved plan that addressed Sandy and climate change issues. That plan was dumped for this REBNY plan. You really need to do some background research for that plan and know the history of the East River Park.

"After Hurricane Sandy raged through New York in 2012, the community worked for four years with officials to plan flood control. Flood walls and berms (long hills) would be built along the FDR Drive for storm surge protection. The park itself could be flooded during a hurricane. It would help absorb the overflowing waters and quickly recover. It would cost about $770 million. In late 2018, the city suddenly decided the whole park should be erased to build a giant levee with a new park on top.
They will close 60 percent of the park in 2021, demolish it, then close other sections as they reopen completed areas. It is scheduled to take five years (but when has NYC ever done anything on schedule?) and cost $1.45 billion. An adaptation of the earlier plan should be our solution."


It's too bad that, Arthur Schwartz, the lawyer who is supposedly representing East River Park Action, is too busy running for City Council to consider that the missing report is an important argument for the alienation suit that is supposedly being appealed.

@Edmund Dunn - thank you for posting that. People seem to be forgetting there WAS a plan in place and DeBlasio took it upon himself to reward his cronies with the contract without any explanation. He needs to be nailed to the wall on this one.

"We always knew the change of plans was all about minimizing disruption to the users of the FDR drive. Tear down the road, have a breath of fresh air and plenty of land mass to absorb future floodings. Paris tore down a highway on the river bank and reclaimed it for people instead of cars. We deserve better. The wealthier west side of Manhattan has no highway: it has a street with traffic lights, crosswalks and 30 MPH speed limit."
+1

Why can't they just build the berm with drainage where the inner roadway is? There is enough room for a berm and a little bit of room for service vehicles. So weird to destroy years of natural growth and a lived in park, all I can picture is astroturf and saplings and parks guide cops everywhere.

@choresh what? People are in the cars. Tearing down a major roadway does not help people. What're you talking about?

Sometimes after reading comments I have to make sure I'm reading E.V. Grieve and not Transportation Alternatives what with the anti-car agenda being put forth from certain folks.

If you remove the FDR then all those cars will go on the streets. Cars with people don't just go away when you take a road away.

East River Park has been an absolute lifeline during this horrible time for my family and me, as well as thousands of others. There is simply no other comparable green space in our underserved area. Seward Park was locked the entire spring, so East River Park was the only place we could walk to and breathe, get some sun, watch birds, lie on the grass (which you can't do at Seward Park anyway), jog (which you also can't do at Seward), or bicycle (which you can't do at Seward either). I find it unconscionable that the City has been pushing forward with this drastic and destructive plan during an active pandemic--it has weighed on my mind the entire plague year. The grief I feel while walking in the park, looking at my beloved oak trees, watching birds, watching all of the many kinds of people who use the park (seniors getting sun, people fishing, children playing in grass, endless joggers), thinking in a few months how this beautiful space would be closed and everything in it destroyed, was heavy. It's a heartless administration and elected officials who would do such a thing to the Lower East Side, which as a lower-income area already lacks in green space and services, and was hit hard by covid. And yes, I lived through Sandy and know we need flood protection--the City had a beautiful plan that preserved the park AND would provide flood protection, but it required that the sacred FDR drive that brings so much pollution and noise have one lane closed, which is apparently a much worse thing to do than impacting the health and wellbeing of LES residents for years.

Where do you hear anyone saying that it's okay for homes to be flooded? They're just asking if protection can be done less destructively (and more economically). The federal funds cover less than 25% of the cost, so your tax dollars will be financing this project for a loooong time to come. In addition, nobody would dream of razing Central Park, Prospect Park, etc to the ground because ballfields need repair. They just ... renovate the ball fields.