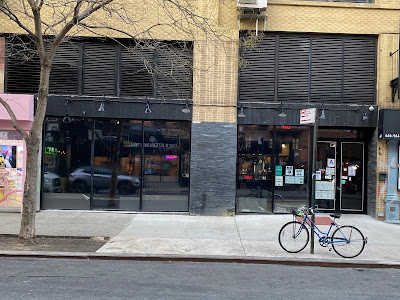 Multiple readers have pointed out that 99 Favor Taste at 37 St. Mark's Place has closed here just west of Second Avenue.
The business has not been open in recent months... and the location has been removed from the 99 Favor Taste website (there are four other NYC locations).
This isn't the first time that it appeared 99 was done for. Late this past summer, a "14-day notice demanding payment of rent" notice arrived on the front door. According to the paperwork, the restaurant owed $34,986 for the August rent along with a balance of the July rent and real-estate tax for a sum totaling more than $52,000.
There was also the ongoing construction that blocked entry to the restaurant. However, to some surprise, 99 Favor Taste did reopen in the late summer and early fall.

The restaurant, which offers traditional Korean-style barbecue and Chinese hot pot meals at multiple NYC locations (and free birthday meals), opened in the East Village in July 2017.
Photo by Steven
Posted by Grieve at 5:00 AM

It was definitely open until the second shutdown of indoor dining. Obviously it is closed now. They don't have much space there for outdoor dining.
Also, the place is awesome.