There's something about Mary O's 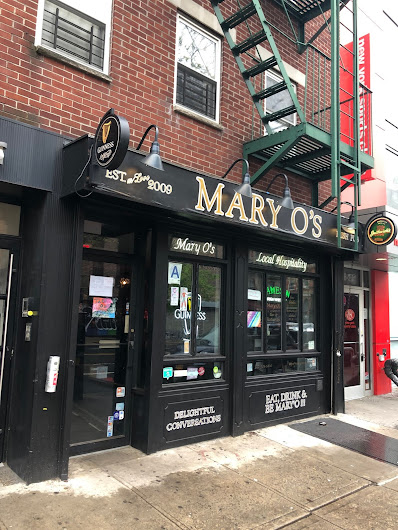 Mary O's, the 11-year-old Irish pub at 32 Avenue A between Second Street and Third Street, is currently closed during the pandemic.
However, proprietor and EV resident Mary O'Halloran remains busy in the kitchen.
As Roger Clark reported at NY1 this week, O'Halloran is making Irish soda bread scones based on her mom's recipe from County Mayo, Ireland, and selling them online. Patrons can also purchase a shepherd's pie, and she will deliver it to one of the city agencies feeding those in need.
Per NY1:

"I'm not making money, absolutely no way, but it creates a vibe with people between the community and my own regular customers," said O’Halloran.

NY1 notes that the tireless O'Halloran is doing all this all the while taking care of her six children, ages 8 through 17.

It's O'Halloran's nature to keep moving and working. Her husband is a longshoreman who is often gone months at a time, so it's a lot to juggle, but she refuses to let Mary O's shut its doors.

"My gut feeling tells me that I can survive. I just have to keep going, you know?" said O'Halloran, who added, "It's really, really hard, but I can't give up. Do you know what I'm saying? I just can't."

You can order the scones or shepherd's pie via the Mary O's website here.
EVG file photo
Posted by Grieve at 9:00 AM

Mary is a special person who makes her customers feel like family. She has hosted several private events for my family and my chosen family including birthdays, retirement parties, baby showers and even memorials for our loved ones who we have lost over the years.
I don’t know how a woman with 6 children can juggle her family, a business and still maintain the grace, courtesy, professionalism and honest to goodness love that she shares with us all. Those close to Mary have and will continue to help support Mary O’s so we don’t lose this amazing place in our East Village neighborhood that has given us so much more than we could ever express. IF u have the means PLEASE do order her Irish soda bread and purchase her Shepard’s pie so Mary can continue to feed the homeless and ALL of us who value her and her unequivocal genuine love!
I look forward to seeing u in person after Covid. That will be a party we will never forget. In the meantime we will continue to support ur bar/restaurant which MANY of us in the East Village call home. We love u Mary!
Laura

we know mary and her family---as neighbors---off topic a bit---her children are the sweetest/best mannered people we have EVER encountered :)

She is a wonderful person

What better place to have Fish and Chips than an Irish Pub right? Aye, but Mary O's is more than good Irish food (and other dishes too!). They say that Life is Like The Company You Keep and at Mary's place you'll be keeping some very fine company. Mary, the owner, lends a friendly and family-like presence to her place that attracts locals to return again and again. Talk about getting to know your neighbors. Mary O's has steadily become more than local, it's a community gem. Kudos for donating food to the homeless! Anxiously awaiting her full return so I'll soothe my feelings with her delicious soda bread.

May the road rise up to meet her.

Ordered her amazing scones for friends and family in the Midwest. Everyone loves them. Also put in an order for her people in need Shepard’s pie. Go Mary!