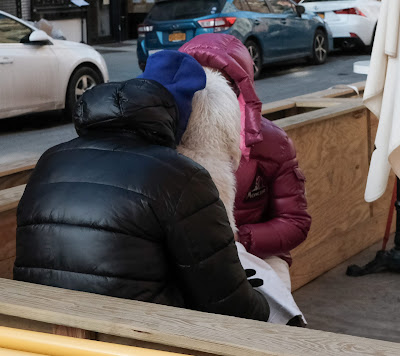 Photo by Derek Berg
• Police searching for thief who stole wallet from stricken shopper at Target on 14th and A (1010 WINS)
• Local City Councilmember Carlina Rivera wants the city to create a real-time map of construction sites and other obstructions so cyclists know the danger spots (Daily News)
• Details on the mayor's "State of the City" speech from Thursday; highlights include permanent Open Streets like on Avenue B (Streetsblog)
• NYC residents behind in getting access to COVID-19 vaccines (The City)
• What's left of Kleindeustchland, or Little Germany, in the neighborhood (Untapped New York)
• RIP Jerry Brandt, founder of the Ritz (now Webster Hall) and music industry veteran (The New York Times)
• NYC's radical female and non-binary skateboarders (CNN Style)
• The candidates for Manhattan Borough President (Gothamist)
• The Philadelphia location of Big Gay Ice Cream closes (The Philadelphia Inquirer ... previously on EVG)
And in case you missed this... artists Graham Fortgang and Samara Bliss of the the Locker Room studio in Brooklyn created this billboard now up in Los Angeles that declares "New York is Dead. Don't come back." ...which serves as "a love letter to those doubling down in New York and choosing to rebuild and a golf clap to those on their way out."