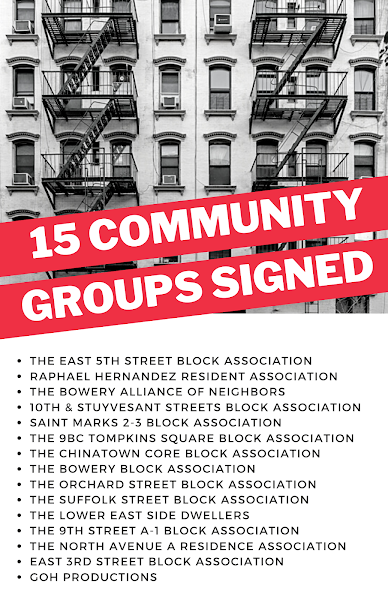 Fifteen community groups and block associations within Community Board 3 have signed an open letter to local and state officials requesting an inquiry into the recent removal of Alexandra Militano and Carolyn Ratcliffe as chairs of the SLA Committee and Arts & Culture Sub-Committee, respectively. (Update: the letter now has 16 signees with the addition of the First Street Block Association.)
Community groups point to the Dec. 30 letter drafted by five CB3 SLA Committee members and the Facebook post from ex-Arts Chair Ratcliffe after the demotions via Chair Alysha Lewis-Coleman raised concern about the direction and mandate CB3 leadership and management is adopting regarding liquor licensing and arts and culture in CB3.
According to a release that accompanied the letter, the signees are especially troubled over the continued support of the Lower East Side Partnership (formerly LES BID) in the CB3 SLA Committee process, which Militano and some residents have opposed in recent years.
"My block association is deeply concerned about unchecked liquor license proliferation and its effect on our block”, said Stuart Zamsky, an officer of the East Fifth Street Block Association in the release that accompanied the letter. "The LES BID would tip the scale for landlords and usher in more licensing if they are involved in the CB3 process."
Neighborhood groups previously expressed concern about the new SLA Committee chair, Michelle Kuppersmith, who they say doesn't have the necessary experience to delicately balance the competing interests of an expanding nightlife industry against quality-of-life concerns. Militano has more than 20 years of involvement with CB3. (The turmoil on the committee also led to the resignation last week of member Clint Smeltzer.)
There were several protest signs visible during the virtual SLA committee meeting on Jan. 11 ... 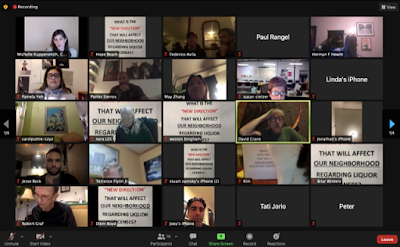 The open letter from the 16 community groups offers a six-tiered approach that will allow residents and CB3 to move into 2021 "on good footing and continue to work together to bring positive and inclusive change for our embattled communities."
The letter follows ...

Email ThisBlogThis!Share to TwitterShare to FacebookShare to Pinterest
Labels: CB3

The East Village and Lower Eastside have an over abundance of bars and restaurants. What we need is stronger support for small businesses. The city and state should find ways to help and encourage landlords to seek businesses that don't need a liquor license to be successful.

I never had a problem with the restaurants around me being noisy. It was just the bars. But now that there is outdoor dining the restaurant on my corner is playing music in their outdoor space. It is hell on earth. They play it all day and up until they close at 10. This was never a problem with restaurants before when everyone was eating inside. Now we have to contend with not just bars but restaurants torturing us all day when we are trying to work at home and at night. It's crazy and unfair. I feel so frustrated. I want the restaurant on the corner to survive. They have plenty of seating and are always busy. There is no need for them to play music. But apparently the SLA allows it. I have called 311 multiple times and so have my neighbors and they can't do anything.

The removal of the 2 CB3 members who stood up for residents who are suffering due to the proliferation of bars in the Lower East Side is politricks at its most corrupt. And trying to pass off this move as an attempt to create diversity on the Board is even more cynical; this is all about the filthy lucre, with no concern for quality of life..

Amazing to get so many groups to speak up on an issue, hope it is listed to.

The issue and issues of this sort start and end with the District Manager. Wonder how many District Managers have controlled power in other neighborhoods across the city, this one may be the longest controlling one.

Many of the local bars are small businesses and they are suffering. NYC needs tax revenue as its in a downward spiral and many bars have closed and will close - we need to support businesses for the survival of the city.

I agree that the music from Open Restaurants is a real problem for many neighbors. What is a reasonable volume is too subjective. People will come whether there is music or not and there is enough noise from diners. Can the music.

With Covid keeping bars and restaurants closed perhaps the CB could turn its attention to more pressing matters.

I am willing to put up with all the talking and laughing I hear from the restaurant outside my window. It isn't what I signed up for when I rented my apartment years ago. But I want them to survive so I can deal with the noise from the customers. But they don't need to play music outside to draw diners. I am not willing to put up with that. Dozens of apartments are affected by just one restaurant. People are going to stop supporting the Open Restaurants initiative if this continues.

The hookah bar on the corner of A and 10th plays ridiculously loud music, even with my earbuds in it bleeds through.

There is a serious lack of respect for residents when it comes to monitoring these issues. Sure we need to support local businesses, but lately seems like ONLY restaurants and bars are on the agenda with no interest in the impact on residents forced to live with the free for all that is Open Restaurants. The CB3 SLA subcommittee was beginning to understand what torture it is for residents to be bombarded with bars pretending to be restaurants overtaking their streets even before covid. Shame on the District Manager for making these unilateral decisions.

The first thing that comes to mind when reading something like this: Isn't a "Community Board" supposed to support the actual community ( the families who live here )as opposed to special interests, deep pocketed businesses? Those of us living downtown have long been wishing we had a supportive, ethical community board like some other neighborhoods are lucky enough to have.
We can only wish that these latest events of the usual ego driven backroom deals and conflicts of interest will finally motivate our elected officials to take a hard look at what has been going on for years and take action. Even in these times we can hope for change, so that the people who live in this district can one day feel that their concerns are being heard and their best interests are being prioritized.

A simple solution to a big part of the outdoor dining issue would be: no music if a restaurant has outdoor dining. It's easy, reasonable and easily-enforced! I think most people would have few issues with outdoor dining if this were the case. Also, restaurants should take note- some people don't like (more than ambient) music when they're eating. I met some friends a few nights ago at an (excellent food) mid-Eastern place on 1st, but we decided to leave because the music was too loud.

MTAtoxic and the other posters make a good point about there being no need for music. Why is it even allowed for these Open Restaurants to install speakers outside? Two places on block had outdoor dining even before covid and never played music. Now they play music outside all the time in their outdoor dining sheds. What for? It plays even when the restaurants are empty.

Hey Anonymous 9:21. Imagine how it'll be when Covid is over and your councilmember Carlina Rivera makes it permanent? Think you're suffering now? Ha! Attend the FULL CB3 meeting and ask YOUR Community Board to stand up for its residents. Covid? Sure! We'll take one for the team. But permanent? WHY?!!

Anonymous 11:00 AM, This has NOTHING to do that. Did you actually read the letter? This has nothing to do with supporting restaurants during covid.

Anonymous 11:44 AM, Like you, I'm willing to put up with ALOT in support of our struggling businesses during Covid. But, imagine those places after Covid and they've been made permanent and are operating at full capacity. Attend the CB3 Full Board Zoom Meeting and let your CB to stand up for you. Otherwise they will sell you out! Tuesday, January 26, 2021 - 6:30pm
Online: https://zoom.us/j/98255418099

MTAtoxic don't agree with any of your obviously well thought out suggestions:) AND, this letter was not about Open Restaurants. Maybe read it?

Sorry. I feel your pain. But just wait until spring/summer. It’s gonna get worse

We need stronger support for small businesses? These restaurants are small businesses!!! They are working their tails off to make a living despite DeBlasio trying to turn this into communist Cuba. You guys are so dumb. Stop hating on everything and wake up to reality. Why shouldn’t restaurants be able to operate and why shouldn’t landlords rent to a business that can pay rent. You want landlords to rent to out of work artists? Get real.

To 8:15: People support small businesses like restaurants. Like people are saying, the music being played outside at these Open Restaurants is driving us all crazy and is totally unnecessary. You will notice most restaurants aren't doing this because they care about their neighbors and know they don't need to play music to entice customers. But there are obnoxious restaurant owners all up and down Avenue A and elsewhere who have zero respect for their neighbors. It's so upsetting because so many of us have supported these businesses and lobbied for the government to lend them support only to have them be so disrespectful to the community.

Glad to see light is being shed on the secretive practices that have been going on at CB3 for years. Community boards are suppose to exist as advisory agencies. CBs are not comprised of elected representatives and thus are not suppose to be setting policy. However that has been the nature of CB3 under its long standing (and toxic) District Manager who has been setting de facto policy for years. The typical scenario is for the board to publicly hold community meetings & discussions and then privately pursue a policy put forth by the DM and small cabal of board members. This is the same tactic that was used for years to turn Tompkins Square park into the city's soup kitchen and drunk tank. And now being used to drive more bars into a neighborhood already rife with quality of life complaints. Community Board members need term limits. CB3 is a prime example of what happens when one district manager has reigned for too long. Committee chairs who agree with leadership hold onto their seats - dare to disagree and you'll be forced to resign or removed.