Happy trails: the sidewalk bridge has been removed from the all-new 619 E. 6th St. 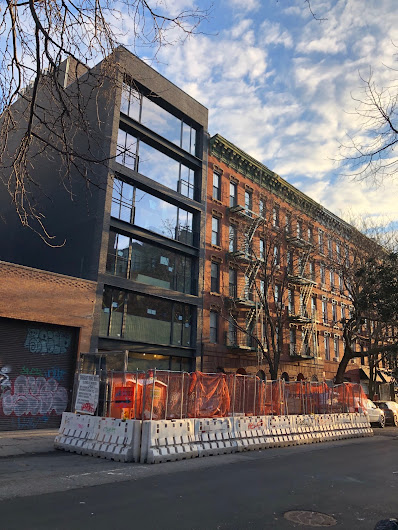 To the amazement of a few residents on the block... workers last week finally removed the sidewalk bridge from outside 619 E. Sixth St., where a 6-story residence has been in the works here between Avenue B and Avenue C. 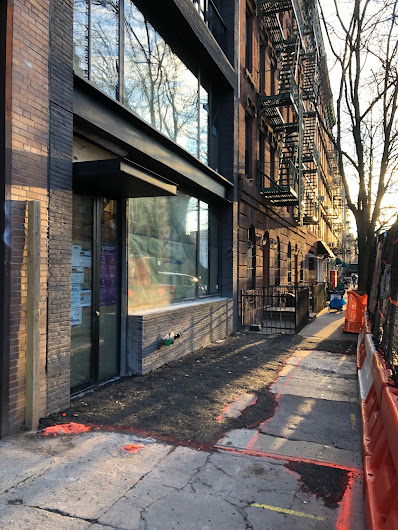 While the sidewalk obstruction is gone, there are still construction supplies stacked in the street.
As a reminder of this project via DXA Studio Architecture, the architects of record:

We first heard about this project in January 2016. It has seemingly taken a long time to knock down the previous one-level structure on the property and get to the point where workers could cart off the sidewalk bridge.
Residents on the block had previously expressed their annoyance by the roadway dividers and temporary walkway, which became a popular spot to use as a toilet.
Previously on EV Grieve:• 6-story condoplex, complete with Danish handmade brick, coming to East 6th Street
Posted by Grieve at 5:00 AM

Not only is it ugly, it has that container with a window look,
it doesn't even try to fit in w the neighborhood.
Unless, that look will be the new neighborhood.

Then ! there is less wall space, less windows to open
stagnant million(s) dollar air, and windows are either
covered or open all the time.

Kind of like Rear Window but from the front.

Lovely job with the sidewalk! Remind me to trip and sue if my stimulus check doesn't come in soon.

"includes a full width mural along a sidewall that links the building in character with its East Village neighbors where street art abounds. " is it some sort of invisible mural?

Five years. Let that sink in. Original owner/partners were going to occupy the different floors. I do hope that is still the plan so that they can live with the inevitable development of the property right next door to them. (Mystery 1-story garage).

finally now get that construction shit off the street too