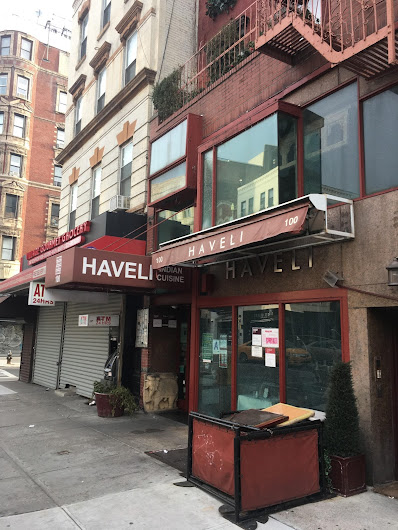 In recent weeks, the staff at Haveli Banjara Indian Restaurant at 100 Second Ave. has been telling patrons that they will be closing sometime early next year... with the hopes of finding another location nearby.

The Maître d’ confirmed the closure/move to me during a recent dinner. (Haveli is asking customers for their email addresses so they can provide an update after hopefully securing a new space.) He said they'd likely close in January or February, and encouraged regulars to come back for another visit here between Fifth Street and Sixth Street.

One source said that the previous landlord died. The building has been on the market since September. The asking price is $8.6 million. The restaurant, with the intentionally shattered windowpane (crackle glass?), will be delivered vacant, per the listing. 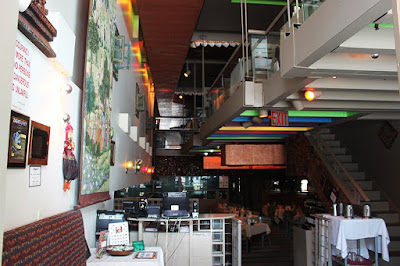 I always liked the restaurant's interior, which, according to its website, "is patterned after an Indian haveli, a residential mansion with a partially elevated second floor and an interior courtyard."

Haveli Retaurant’s uptairs suspended dining areas permit the patron to observe the entertainment below, wheather it’s dancing or the Indian cooking processes. The wooden gallery windows in these “hanging havelis” are jalis (screens), which allow the viewing enjoyment of reenacted Indian street activitie and decorations. The theatricality of Indian culture complements this country’s traditional food in an urban setting.

The family that runs this (I think it's a family) is so nice. The décor is so soothing, and the food is really good. I really hope they land another place in the neighborhood.

my go to Indian delivery fix since I arrived in the EV....food was always dependably a cut above its 6th St. neighbors, consistently friendly folks to deal with and when dining at the restaurant the service was always efficient and even warm sometimes. I really hope they find a new outpost nearby very soon.

I wholeheartedly second everything 29Years has said and am sorry to see them go. I'm not optimistic for a reopening but if, and when, they do, I'll be there.

I'm still pining for the long-gone Madras Café on 2nd ave—it was across the street from Haveli, actually.

If I am not mistaken, this is the restaurant where Spaulding Gray had his last meal, alone. And for this, Haveli holds much sentimental meaning.

The restaurant and building are owned by the same family. The building is in foreclose. It is highly unlikely that Haveli opens in a different location.