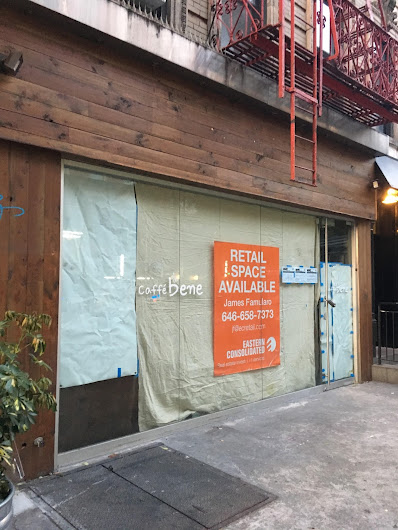 The former Caffe Bene space is getting the covered-window treatment on St. Mark's Place between Second Avenue and Third Avenue.

Renovations are underway inside the space... the work permits don't reveal who the new tenant is here at No. 24.

Per the permit in the all-cap DOBguage: "PROPOSE TO PERFORM INTERIOR RENOVATION WORK ON THE FIRST FLOOR RETAIL SPACE AS SHOWN IN THE PLANS SUCH AS INSTALL NON LOAD BEARING WALLS, COUNTER, CABINETS, REPLACE SINK AND COSMETIC WORK OF PAINTING."

If you had to bet based on current neighborhood retail trends, then something involving desserts or noodles would be a safe wager.

The Caffe Bene outpost closed back in April after 17 months in business.

Before Caffe B, the address was a Pinkberry. The space was on the market for nearly six months before Caffe Bene signed a 10-year lease in August 2015, with a reported asking rent in the $240 per-square-foot territory.
Posted by Grieve at 7:52 AM

I know Ben & Jerry's is coming to the block.

I will go out on a limb and say massage parlor. Why not they only stay open for 6 months before getting shut down, a perfect fit for St Marks.