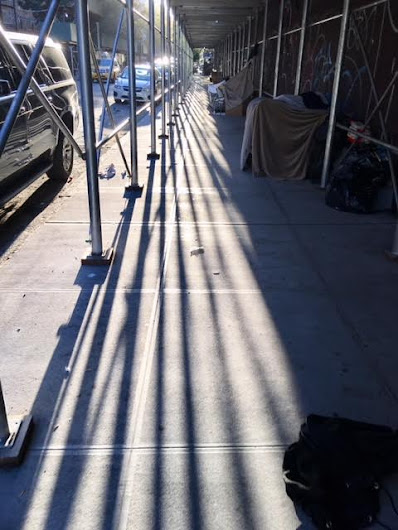 In recent months, several residents have said that a growing number of travelers/crusties have been living under the sidewalk bridge next to the Verizon building on 13th Street between Second Avenue and First Avenue.

Early Sunday evening, there were reports of a small fire under the sidewalk bridge.

Shortly after the FDNY departed, a dump truck arrived, and a crew discarded the various mattresses and furniture. 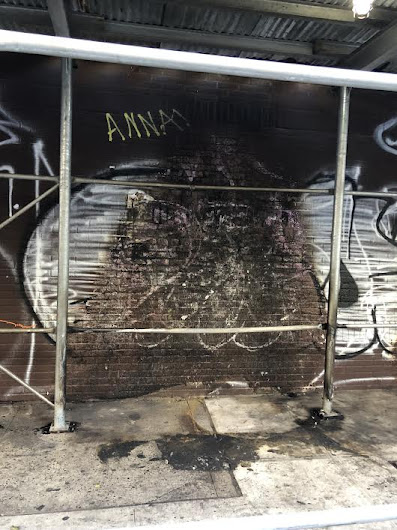 One resident on the block shared this about the recent activity under the sidewalk bridge "where the crusties have made home."

They live and sleep there. They openly shoot up, get drunk, fight, party all night and block the sidewalk with mattresses, chairs — even tables.

The situation has become a total nightmare now. This scaffolding — I swear it seems like it's been up 10 years and I've seen them do about maybe 10 days work on the building that entire time. It's become the homeless heroin spot now and it's incredibly disturbing to watch people shooting up. We really don't know what to do but something definitely has to be done.

Our block has been gross for the last six months. The homeless have moved in under the Verizon scaffolding ... I witness drug deals on the regular and the cops have only parked on the block one day — I’m ready to move! And now they cause a fire?

EVG correspondent Steven spoke with a super who works on the block. The super said that residents have called 311 "to no avail."

A few scattered items remained on the sidewalk yesterday... 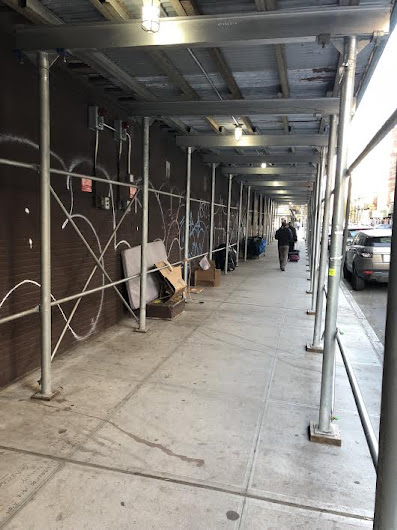 As for the Verizon-owned building, there are multiple work permits on file with the city, including for "mechanical chiller replacement. Removal and replacement of chiller along with related piping." There are also permits for "new steel dunnage and steel framing to support new generator and fuel piping." There doesn't appear to be any current tenants in the circa 1923 building. (The building was also the site of a major fire in 1975.)

In several recent years, Verizon was engaged with the local graffiti community in the ongoing brown paint vs. tagging battle.

Meanwhile, one of the readers said that a few people had returned last night to sleep on 13th Street.

[Reader-submitted photo]
Posted by Grieve at 4:17 AM

I remember that fire in 1975. Everytime I smell burning plastic it reminds me of that fire. Born and raised in the EV and love it.

What's the law related to scaffolding? The scaffolding at the school on 1st and 9th (?) was up for YEARS. We need a law that says you can have it up for x months then it either has to come down or you have to pay a hefty fine. It's disruptive and shouldn't be permitted to stay up forever.

Are they waiting for Santa com

I totally agree about the scaffolding law 10:02. The building at Houston and B is totally empty and falling down so it has had scaffolding forever. Not to mention 3rd and C...

This is my block. My female friends have been verbally harassed and followed by some of the male crusties. They smell revolting, I cross the street to avoid the BO and bathroom smells. One guy screamed at us to shut up one night on our way home.

They discard their used needles in the street and on the sidewalk. How is that not a safety concern for the NYPD? Do we really have to wait til someone gets hurt?

It was so nice to the see the block mostly cleared the next morning.

The cops just breeze on by....

Don't blame the NYPD. Blame the just re elected mayor and city council. They want to close Rikers. They want to decriminalize all sorts of behavior. They would call these 'victimless' crimes and talk about affordable housing and a 15 dollar minimum wage. They don't want to be seen as tough on crime or supporting aggressive proactive policing. They want to be progressive and anti Trump. To answer a question posted earlier- yes someone has to be hurt for action to be taken. Why should the politicians care? People complain here but the few that vote vote for anti cop liberal dems. You think the council wants aggressive law enforcement? They want passive
ACLU BLM style law enforcement. Get ready for 4 years of this.

I’ve lived here since 1981 and just had my first experience of seeing someone shoot up on the street in broad daylight — Sunday around noon on 7th Street just west of the vacant lot. Just kept walking but very disturbed. I hate the thought of kids seeing this.

They’re back again. Saw one of the females dragging a blowup mattress last night while walking my dog. I stopped walking on my block because of them, it’s beyond disgusting. After 9 years as a EV resident, I’m ready to move out

My father grew up on this block in the 1950s. He told me that back then, after Christmas, everyone would toss their trees along that wall of the phone company building and they'd literally light them on fire to dispose of them.

Thse hobo Hiltons are getting really scary. I've been avoiding them like the plague for a while now. But the progressive electorate reelected Conrad dah Blasio.

I lived in the East Village, specifically on the block on 13th between 1st and 2nd for the past 8 years and only recall the scaffolding next to the old Verizon building going up in the last year or so, but I may be mistaken.

That's a very bad block to walk down now, from 2nd Ave. heading east - on the one side is all the crap under the Verizon scaffolding, and across the street they're dismantling that former residence for dental/med students.

As for the Verizon building itself, it's odd for you to say "There doesn't appear to be any current tenants in the circa 1923 building." The building is not occupied by a retail tenant, nor by any residential tenants, but it's an active switching center for phones and internet service.

Where to begin.... Throwing addicts in prison may make the streets look nicer but it similar to sweeping a problem under the rug. In really progressive cultures addicts are treated not incarcerated. I know it is hard to feel empathy for someone that is harassing you or a friend but we know the south side of this block is off limits so walk on the north side and be happy you are not one of these people.

Time to roll out the Giuliani era program of giving them $300 and Greyhound ticket.

@8:12am: Oh, sure, just walk on the other side, b/c the crusties are in control of that space now?

You don't think they'd cross the street to hassle anyone? (Maybe they wouldn't, given how lazy they are, but still.)

BTW, if you failed to notice, walking on the "other side" means you're walking past a huge building demolition site.

@ 12:17 PM - You are correct that it is mind-boogling to suggest that we neighborhood residents should have to "cross the street" to avoid these gangs of derelicts. We have become like the timid towns-folks in old western movies, cowering under the boots of marauding gangs, waiting for salvation from some heroic savior.
Fuck that! It's easy to blame our Mayor or the ACLU for our predicament, but I'm not sure that's a fair or accurate interpretation. The NYPD has no problem hauling some people off the streets, yet these visiting repeat offenders seem to be arrest-prove. I've written here often about this issue, as I live in the building formerly housing San Loco, and have often been gifted with loud, drunken abusive mobs literally under my window at all hours of day and night. The day of the recent kerfuffle at the new karate school, I had called the 9th precinct earlier in the day, after watching for hours as the crusties grew larger in number and more drunk and abusive, As is often the case, my call was ignored, so that evening the crusties/travelers/parasites harassed students and staff, and vandalized their building's entrance. I have WITNESSED crusties screaming at responding cops, being to drunk to stand or follow suggestions (not demands) that they move along, with no consequences.I've seen them assault staff at the Orpheum Theatre, and the convenience store where they purchase their life-blood (beer). Is it possible to convene a meeting of reps from the Mayor's office, NYPD, newly elected Carlina Rivera and concerned citizens to formulate a strategy to deal with this ticking time-bomb?

It's abominable that the NYPD will not take action to handle a bunch of marauding junkie bums but will swarm the second a protester steps out of a sanctioned free-speech zone or hassle a bunch of kids hanging out on by a bodega in a town that is getting real estate interest.

Like de Faustio reminded us. this is your city now.

I live on this block and for two weeks straight called 311 and 911 every other day. One time the cops came and all they did was park on the corner and chat in the car, completely useless. I'm glad this fire happened and it finally go them all out of there, they smell disgusting, they harass neighbors, and they openly shoot up. I'm hesitant to walk my dog late night because of this situation. I hope this keeps them away for a while.

I too live on this block and I too have called 311 a number of times. What can we do? Perhaps go to the next mtg with the local Precinct? I'm in!?

The scaffold is coming down. All hail the gods of sidewalk bridges for answering our prayers!