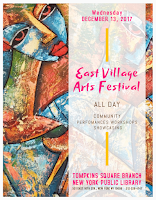 The Tompkins Square Library branch on 10th Street between Avenue A and Avenue B is hosting an all-day Arts Festival on Dec. 13.

The day includes a variety of performances, workshops and displays by local artists from 11 a.m. to 7:45 p.m. You can find the full rundown here.

5-5:45pm: 16mm Film Screening. We'll be screening two short 16mm films from the New York Public Library for the Performing Arts reserve film and video collection, both filmed on the Lower East Side, in our basement community room. The Heart of Loisaida (1979; 30 min.) Producers, directors: Bienvenida Matias and Marci Reaven. Shows efforts on New York's Lower East Side to revive abandoned buildings through the work and persistence of the local, predominantly Latino residents.

A la Guerra (1979; 10 min.) Producer, director: Thomas Sigel. Actor/poet Bimbo Rivas presents an ode to the struggle against assimilation being waged by the Puerto Rican community of New York's Lower East Side.